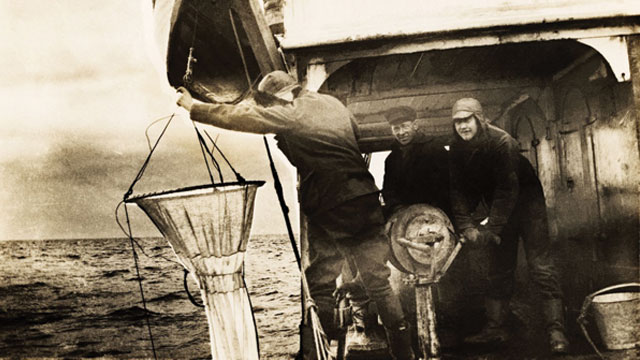 CURIOUS CATCH: Norwegian zoologist Ditlef Rustad (left) hauls his net out of the frigid waters of the Southern Ocean. Part of an expedition to Bouvet Island in 1927, Rustad discovered a bizarre fish with a protruding jaw, creamy white gills, and transparent blood. He called it the “white-blooded crocodile fish.” PRIVATE COLLECTION, LIV S. SCHJERVEN

On December 1, 1927, zoologist Ditlef Rustad pulled ashore on Bouvet Island, 1,750 kilometers off the coast of Antarctica, as part of a Norwegian expedition to claim the remote, wind-whipped island as a whaling outpost. Later that month, casting nets into the frigid waters, Rustad hauled up a very strange-looking fish. It had no scales and was very pale, even translucent in parts. Behind its protruding, crocodile-like jaw, he saw gills that were milky instead of the usual crimson. And when Rustad cut open the fish, he saw that its blood was transparent, like...

In a 1954 Nature paper, biochemist Johan Ruud confirmed that Chaenocephalus aceratus lacked red blood cells and hemoglobin, the protein that carries oxygen around the body and gives blood its red color. “It was a shocking discovery,” says William Detrich of Northeastern University, who has spent most of his career studying C. aceratus and the other 15 recognized species in the family Channichthyidae, or the Antarctic icefishes. “Among the 50,000 or so species of known vertebrates, these fish are the only examples that lack both hemoglobin and red blood cells.” 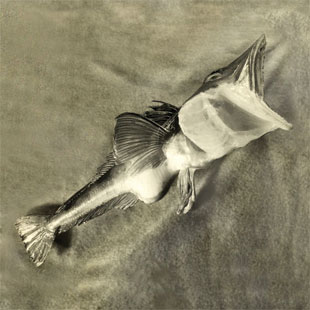 COLORLESS BLOOD: Now known as Chaenocephalus aceratus, or the blackfin icefish, Rustad’s catch is one of 16 recognized species of Antarctic icefish—the only vertebrates known to lack hemoglobin and red blood cells. Thanks to the extremely high oxygen content of the Southern Ocean, the icefish appear to have survived the loss of globin genes long enough to make compensatory adaptations.PRIVATE COLLECTION, LIV S. SCHJERVENInstead, icefish rely on oxygen dissolved in their plasma, which can transport only 10 percent as much oxygen as the hemoglobin-filled blood of most fish. Presumably to compensate, they developed much larger hearts and blood vessels, far denser capillary beds, and a much higher volume of blood. But “the icefish went through a period where they weren’t particularly well adapted,” Detrich notes. Indeed, they likely only survived the initial loss of hemoglobin as a result of the extremely high oxygen levels in the waters of the Southern Ocean—and the fact that they had so few competitors or predators.

Comparing icefish DNA with that of red-blooded fishes in 2006, Detrich identified the remnants of the two globin genes required to make hemoglobin. Since these genes were not entirely necessary for the survival of the icefish in their oxygen-rich sanctuary, Detrich hypothesizes, mutations could accumulate that rendered the genes nonfunctional without killing the fish. “Evolution is a tinkerer,” Detrich says. “It works with what’s available, and if what’s available isn’t needed, it gets thrown out.”

Though it is not the only example of this fundamental rule, the bizarre white-blooded fish hauled up by Rustad in 1927 is surely among the most extreme cases—a stark illustration of how even genes thought to be absolutely essential for vertebrate life can, in the right conditions, be allowed to perish. 

Watch a short film from the Howard Hughes Medical Institute about how scientists have pieced together the evolutionary history of the Antarctic icefish.