Degrading Deepwater (right): Marine bacteria helped break down the hydrocarbons in this slick caused by the Deepwater Horizon oil spill in the Gulf of Mexico in 2010. Posted: May 17, 2016

Origin Story: Gill arches, situated below the eyes in this skeletal preparation of a late-stage little skate (Leucoraja erinacea) embryo, may provide clues about limb evolution in tetrapods. Posted: April 20, 2016 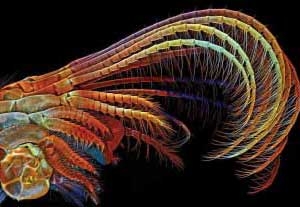 Raking It In: Barnacles use long, wispy appendages,...