Proteins constantly fold and unfold in vivo. Molecular chaperones help to ensure that a protein's final three-dimensional assembly is correct, but mistakes happen. If proteins assume unnatural conformations, they can cause any one of a family of diseases called amyloidoses, in which misfolded peptides accumulate in or around cells, forming aggregates. Most symptoms associated with systemic amyloidoses are due to the physical build-up of these amyloid deposits in vital organs. 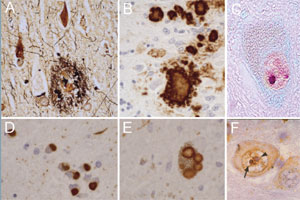 But in neurodegenerative diseases...

The amyloid hypothesis of Alzheimer, that Aβ accumulation is central to AD pathogenesis, was first proposed more than a decade ago,3 but by the mid-1990s scientists had discovered problems with the theory. Chief among them, the number of Aβ aggregates in the brain doesn't always correlate with the severity of dementia.

"The amyloid hypothesis had a number of glaring deficiencies," explains Charles Glabe, a molecular biologist at the University of California, Irvine. "There's a lot of ... evidence that amyloid is somewhere in the causal chain of pathogenesis, and yet the amyloid deposits don't seem to correlate with the disease." Further, a specific form of Aβ had not been identified as the source of neurotoxicity in vivo. In other words, researchers were missing something.

Researchers Bill Klein and Grant Krafft at Northwestern University in Chicago took the first steps towards addressing these inconsistencies in 1998, when they proposed that plaque precursors, not the plaque themselves, are neurotoxic.4 Selkoe's 2002 report helped confirm their view and tackled other questions posed by critics of the hypothesis, according to Glabe. " [It] was just further evidence that it's really the oligomers and not the fibrils that are important," he says. " [It] also suggested that the pathological effects don't have to kill neurons ... which is another problem with the amyloid hypothesis."

Showing that Aβ oligomers can cause loss of hippocampal LTP made the missing connection between the amyloid protein and disease symptoms. " [It] helped prove what people had been thinking for a long time," says Masliah, that "it is a synaptic dysfunction caused by the oligomers that is responsible" for the onset of AD.

For some researchers, these revisions made the amyloid hypothesis more appealing. "If we broaden the amyloid cascade hypothesis to these smaller oligomers ... it's very likely the central pathway [that leads] to Alzheimer disease," says Lennart Mucke, a neuroscientist at the University of California, San Francisco, and director of the Gladstone Institute of Neurological Disease.

"A lot more people are comfortable with the amyloid hypothesis when it's rephrased as an Aβ hypothesis, although ... it's fundamentally the same process in the brain," says Selkoe. Now, he adds, maybe 80 to 90 percent of Alzheimer researchers agree that it's an amyloidosis.

The extracellular plaques associated with AD have structures similar to those of the intracellular protein aggregates seen in other amyloidoses, such as Parkinson disease, spinocerebellar ataxia, and prion diseases, and to the intracellular Aβ clumps known as neurofibrillary tangles in AD. Alzheimer and Parkinson diseases frequently coexist, according to Bruce Yankner, a neuroscientist at Children's Hospital Boston, who coauthored another highly cited paper about the role of α-synuclein inclusions in Parkinson.5 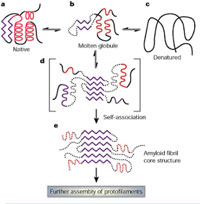 In this proposed mechanism for lysozyme amyloid fibril formation, a partly folded, molten globule-like form of the protein self associates through the β-domain to initiate oligomer formation. This provides a template for further deposition of misfolded protein and for the development of the β-sheet, core structure of the protofilaments within an amyloid fibril. Undefined regions (dotted lines) not resolved in the structure are unknown. (From D.J. Selkoe, Nature, 426:900–4, 2003).
© 2003 Nature Publishing Group

Dobson and Bucciantini's paper shows that the structural similarities of aggregation extend beyond disease-related proteins. Their study suggests that such aggregation might be a property of all proteins, albeit one generally selected against by nature. They further suggest that any peptide's intermediate oligomeric form is just as neurotoxic as that of Aβ.

A protein's side chains define its native structure, which is why all proteins have different shapes when folded. If aggregates of different proteins have the same structure, Dobson says, then their shape must be dependent on the main chain common to all proteins, not their side chains. His team's ability to prompt non-disease-related proteins to form cytotoxic aggregates similar in structure to those seen in common neurodegenerative diseases supports this idea.

Glabe agrees. Having researched antibodies that cross-react with aggregates of different proteins,6 he explains that these antibodies recognize the polymer conformation of the protein backbone, independent of the side chain sequence. From this, he says, a concept emerges: "It's the polymer property rather than the specific protein per se that's connected to pathogenesis," he says. "It's a real kick in the head. It's very different than what we've all looked at."

He speculates that the proteins might form α-sheets, which are structural conformations similar to β-sheets except that their hydrogen bonds all point in the same direction and their bond angles are smaller. He explains that α-sheets are energetically as efficient as their counterparts, but "evolution has selected against them because they're not good structures to have around for biology." Their extreme stability and tendency to form fibrils make them "incompatible with basic cellular function."

If oligomers are responsible for neurotoxicity, as these papers suggest, and the oligomers all have the same basic structure, then it's possible to envision a variety of potential therapeutic strategies. One option is a chemical chaperone, such as Congo Red, that would prevent aggregation, says Yankner. If the fibrils are composed of unidirectional α-sheets, as Glabe speculates, another option might be to cap off one end of the growing chain to prevent further propagation of the cluster. Clinical trials involving an amyloid vaccine for Alzheimer, an immunization to help the body dispose of aberrant proteins, are also underway.

Walsh and Selkoe's study also supports a possible therapeutic strategy for tackling Aβ oligomers in AD. Their team was able to prevent LTP disruption by adding gamma-secretase inhibitors, an approach that others have been investigating. Since it's not clear that Aβ has an essential role in the adult brain, inhibiting its production might be another safe way to prevent AD.

"The question now is, what is the most relevant mechanism to hit therapeutically, and I don't think the answer to that is established yet," says Mucke. "Even though there are multiple mechanisms and functions that have been identified, which of those prevails in the aging human brain – that is often very hard to predict."