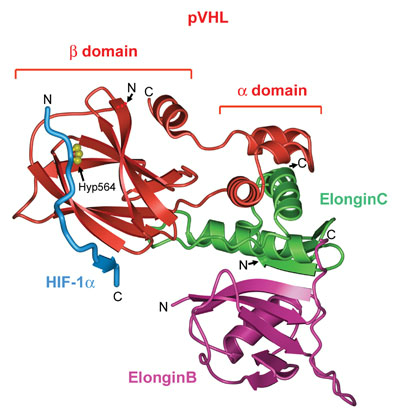 APPETITE FOR DESTRUCTION: Schematic representation shows the 15-residue portion of the HIF-1a destruction sequence, which is bound to the B domain of pVHL in the pVHL-ElonginB-ElonginC complex.
Reference Reprinted with permission from science, 296:1886-9, 2002

In the complicated, occasionally counter-intuitive world of signal transduction pathways, sometimes events turn out to be much simpler than first supposed. Such is the case with an important oxygen- sensing pathway, the essential features of which investigators Bill Kaelin at Dana-Farber Cancer Institute and Peter Ratcliffe at the University of Oxford independently describe in these Hot Papers.1,2

Understanding how cells sense oxygen has potentially important implications for research in cancer, diabetes, and many ischemic diseases. The appropriate delivery of oxygen by the lungs, heart, blood, circulation, and blood vessels to all cells is a delicate operation: Too little oxygen impairs metabolism; too much oxygen is toxic.

The search for the oxygen-sensing mechanism has prompted a variety of theories, many of them complicated, some of them contradictory.3 Though not necessarily the definitive oxygen sensor, the pathway that these teams describe has significance. "I think most people are coming around to the view that this is certainly a major component of the oxygen-sensing pathway," says Kaelin, who is also a Howard Hughes Medical Institute Investigator. "That's not to say there couldn't be other inputs."

Pediatrics professor Gregg L. Semenza, Johns Hopkins University School of Medicine, says that the groups quite simply put the first definitive explanations into the hands of researchers. "What these studies demonstrated was a molecular mechanism by which changes in cellular oxygen concentration can lead to changes in gene expression."

A MOLECULAR CROSSROAD  Kaelin and Ratcliffe's papers emerged from two distinct fields: "We sort of met in the middle," says Kaelin. His work centered on tumor biology; Ratcliffe's, on oxygen sensing. Once the von Hippel-Lindau tumor suppressor gene was cloned in 1993,4 Kaelin's lab began studying its protein. His team wanted to know how inactivation of the VHL protein caused tumors to develop.

A dysfunctional VHL tumor suppressor gene causes VHL syndrome, in which an abnormal growth of blood vessels develops capillary clusters called angiomas. Angiomas beget highly vascularized tumors, likely a result of angiogenic growth factor overproduction, and the hormone erythropoietin (EPO). The tumors recruit sustenance by increasing the amount of red blood cells carrying oxygen. This feature of VHL-related tumors suggested to Kaelin that the VHL protein might play some role in sensing changes in oxygen. "It seemed to me that the tumors that you see in VHL disease are behaving as if they're hypoxic all the time, essentially," says Kaelin.

Ratcliffe, a nephrologist who'd been working explicitly on the problem of oxygen sensing, approached it by studying erythropoietin. His group was interested in how hypoxia, or oxygen deprivation, stimulates EPO production. "That sensing process remained enigmatic for several decades," says Ratcliffe. This conundrum drew him into the field in the early 1990s.

Ratcliffe says that his team realized early on that this was not a special sensing property of particular cells, but a widespread phenomenon that regulates angiogenesis, metabolism, and a whole range of cellular systemic responses to hypoxia. One important element of that phenomenon was the VHL protein. Consequently, both groups wound up studying proteins that were not on their original to-do lists: Ratcliffe, with VHL, and Kaelin, with hypoxia inducible factor (HIF)--a protein that maintains oxygen homeostasis and regulates hypoxia-inducible genes.

REGULATORY REACTION  The big questions then: How does the VHL protein detect the presence of oxygen? In particular, what sites on the HIF molecule confer oxygen-sensing behavior? Is it the HIF that is modified or is it the VHL?

Kaelin's and Ratcliffe's groups each suspected there might be a posttrans-lational modification involved. Indeed, as reported in the two Hot Papers, the groups discovered a crucial modification of conserved prolyl residues in HIF. VHL binds only to the alpha subunit of HIF (one of the HIF complexes' two subunits) when an oxygen-dependent, posttranslational modification occurs, namely hydroxylation at proline 564 by a then-unidentified HIF-a prolyl-hydroxylase or HPH. Identifying a role for the hydroxylation was highly significant; prolyl hydroxylases were known to use dioxygen in the hydroxylation reaction. This established a clear connection between the availability of molecular oxygen and the regulatory reaction.

"The link to oxygen turned out to be much simpler than it had seemed," says Ratcliffe. Fifteen years of research had yielded the identification of three major steps: HIF, hydroxylation, and VHL. The story would have been much more complicated if the pathway were composed of, say, multiple kinases.

Interestingly, hints at the role of prolyl hydroxylation could have been gleaned earlier if researchers had looked to the field of collagen research where, for more than two decades, prolyl hydroxylases have been known to use molecular oxygen and to be highly sensitive to iron chelators and cobalt. "Had we read that field, it would have been helpful," says Ratcliffe.

A few months after the April 2001 papers were published, two groups, including Ratcliffe's, reported isolating the HPH in Drosophila, Caenorhabditis elegans, and mammalian cells.10,11 HPH is thought to be a promising drug target. Enzyme inhibition increases HIF levels, enabling the protection of hypoxic cells, like those typical of ischemic conditions. Kaelin is working with the South San Francisco-based biotech company FibroGen to pursue inhibitors that might protect against stroke. Several pharmaceutical companies are doing likewise.

The cancer case is not as straightforward, however. Enhancing HPH should decrease the level of HIF, theoretically providing an antiangiogenic treatment approach that cuts off oxygen supply to tumors. But, according to Kaelin, there are some contradictory reports as to whether HIF is protumorigenic or antitumorigenic. He says that he believes it's usually the former. Ratcliffe notes that ascorbate, because it enhances the activity of HPH, might figure into an antiangiogenic treatment. Recent work from Kaelin's group has solidified the role of HIF in VHL-associated tumors in murine studies. They've shown in mice that HIF downregulation is necessary for tumor suppression by VHL.12

Researchers continue to investigate the prevalence of protein hydroxylation as a signaling mechanism and to look for targets other than HIF. "The role of reactive oxygen species in the regulation of HIF-1a expression remains enigmatic," says Semenza. "The complexity of the system is considerable, as might be expected for a protein that plays a critical role in many developmental and physiological processes." 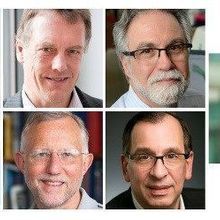