Two-photon microscopy offers two advantages over other live cell imaging techniques: It penetrates up to 1 mm into tissue and it minimizes phototoxicity because the beam excites just a single focal point at a time. In order to excite a fluorophore labeling the tissue, two long-wavelength, low-energy photons must meet nearly simultaneously, combining their energy to create a quantum excitation event. The probability that such an event will occur is extremely low, but increases quadratically with laser intensity; a special laser is thus main element of the technology.

A titanium sapphire laser (1) emits pulsed near-infrared light (red beam) at a rate of about 80 million pulses per second. The beam passes through a pair of computer-controlled galvo mirrors (2) that control its movement along the X and Y axes of the tissue. The beam then passes through the dichroic mirror (3) to the objective lens where it is focused to the desired focal plane in the tissue (4). Photons that are scattered by the tissue cannot pair up with others to cause an excitation event. When one occurs, however, the two photons combine to excite a single fluorophore, which then releases light at its emission frequency (pullout). The emitted fluorescence (yellow beam) is then redirected 90 degrees by the dichroic mirror (3) to the set of photomultiplier tubes (5) that detect it. 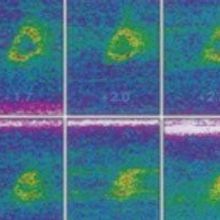