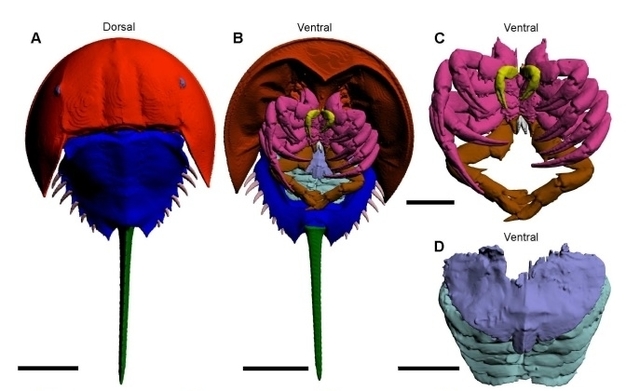 The horseshoe crab, Limulus polyphemus, has two more muscles that had been believed, according to research published yesterday (February 14) in PLOS ONE. Researchers at the University of New England in Australia performed computed tomography (CT) scans of a horseshoe crab specimen from the university’s Natural History Museum and of limbs from fresh samples. They used the scans to produce 3-D models of the crabs’ musculature.

They found that the crabs had two previously undiscovered muscles in its appendages. One is located in the leg it uses to push itself along the sea floor, and the other is in the male’s pedipalp.

“We have studied and scanned Limulus polyphemus as it is an iconic, yet strangely alien organism,” says study coauthor Russell Bicknell in an emailed press statement. “It almost looks as if it was plucked right...