ABOVE: Lago de Cahora Bassa in Mozambique, one of the lakes studied by the authors, with a green algal bloom
NASA EARTH OBSERVATORY, JESSE ALLEN

Freshwater phytoplankton blooms cause losses of more than $4 billion annually in the United States by disrupting the seafood industry, contaminating drinking water supplies, and harming water recreation and tourism, according to Anna Michalak of the Carnegie Institution for Science and colleagues. Algal bloom intensity has increased in 68 percent of sampled lakes worldwide since the 1980s, according to their study published in Nature October 14. 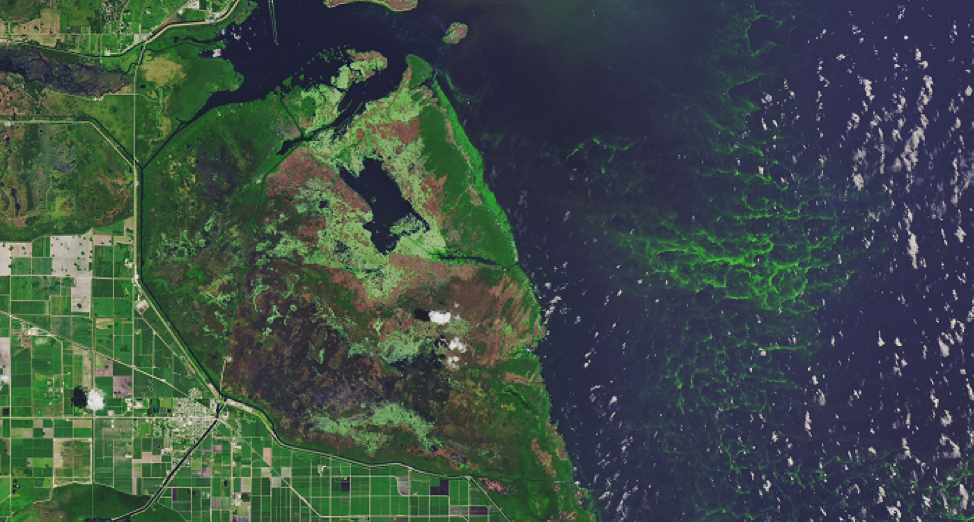 Toxic algal blooms, such as this one in Lake Okeechobee, resulted in Florida declaring states of emergency in 2016 and 2018.
NASA EARTH OBSERVATORY, JOSHUA STEVENS

Michalak’s team partnered with Google Earth Engine to analyze 30 years of summer algal bloom data from NASA and the US Geological Survey’s Landsat 5 near-Earth satellite. The researchers examined blooms in 71 lakes on six continents. They found that the intensity of summer blooms—classified by colors pertaining to different concentrations of chlorophyll-a, produced by algae—increased most of the lakes and decreased in only 8 percent. “This means that algal blooms really are getting more widespread and more intense, and it’s not just that we are paying more attention to them now than we were decades ago,” says Michalak in a news release.

The mechanism behind the increase is unclear. Lakes with a decrease in intensity warmed less than others, suggesting that warming could be hindering lake recovery from dangerous algae and counteracting bloom management efforts, the authors write in the paper.