Researchers have uncovered the earliest direct evidence of humans collecting and cooking starchy stems called rhizomes, according to a study published in Science last Friday (January 3). Lyn Wadley, an archaeologist at University of the Witwatersrand in South Africa, and colleagues found the burnt remains of rhizomes at ancient cooking fire sites in Border Cave, South Africa. The plants, which are Hypoxis species, are estimated to be up to 170,000 years old.

“It is extraordinary that such fragile plant remains have survived for so long,” says study coauthor Christine Sievers at University of the Witwatersrand in a press release. The authors hypothesize that burning helped preserve the plants.

Rhizomes are carbohydrate-rich modified stems that branch off underground. Cooking rhizomes makes them softer and easier to digest, and increases glucose availability. Some rhizomes, such as lotus root, are still eaten today. Hypoxis plants “could have provided a reliable, familiar staple food source for early humans moving within or out of Africa,” the authors write in the study. 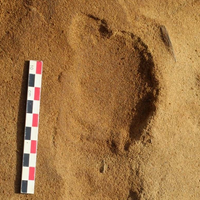