ABOVE: Boston’s Museum of Fine Arts supplied beer- and bread-making objects that would have been in regular use in ancient Egypt.
SEAMUS BLACKLEY

On August 5, physicist Seamus Blackley, best known for helping to design the hardware and developer tools for the Xbox, grabbed the attention of scientists, Egyptologists, and bakers alike when he shared that he had baked bread made with 4,500-year-old yeast. Blackley and his collaborators, biologist Richard Bowman and archaeologist Serena Love, first gained access to Egyptian vessels used for bread- and beer-making held at the Peabody Museum at Harvard University and the Museum of Fine Arts in Boston.

Two weeks ago, with the help of Egyptologist @drserenalove and Microbiologist @rbowman1234, I went to Boston’s MFA and @Harvard’s @peabodymuseum to attempt collecting 4,500 year old yeast from Ancient Egyptian pottery. Today, I baked with some of it... pic.twitter.com/143aKe6M3b

“You want to get to the microbe that has been embedded and gone to sleep inside these little protective cocoons in the ceramics,” says Love, who is an honorary research fellow at the University of Queensland in Australia, in an interview with Eater. To extract the dormant yeast without contaminating it, the team injected a nutrient bath into the ceramic matrix, allowed the microbes to unbind from their “cocoons,” and pulled them out using the same syringe. 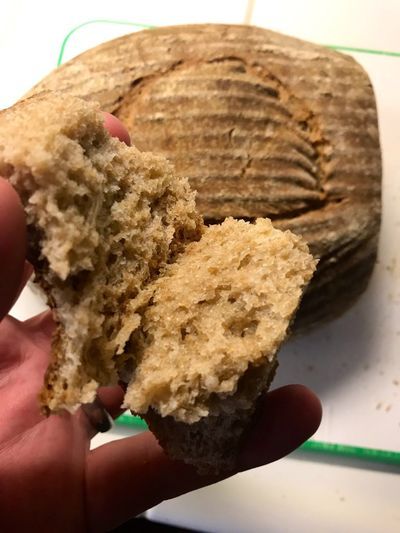 Blackley scored the bread with an Egyptian hieroglyphic (The D-like shape on the loaf) that represents the “T” sound and can also mean “bread.”
SEAMUS BLACKLEY

In his sterilized kitchen, Blackley woke up the yeast with a common yeast growth medium and sterilized flour made from an ancient grain and later used it to bake a few loaves of bread. The public’s excitement over the bread “gives us an opportunity to demonstrate good science,” says Blackley in an interview with The New York Times. “The aroma and flavor are incredible. I’m emotional. It’s really different, and you can easily tell even if you’re not a bread nerd,” he added on Twitter.