There are more types of beetles than of any other animal—over 400,000 species—and their diversity may have been caused by increased variation in flowering plants and horizontal gene transfer from fungi and bacteria, according to a study published yesterday (November 18) in PNAS.

A team of researchers led by Duane McKenna and Seunggwan Shin at the University of Memphis used genomic data to reconstruct the beetle family tree. They analyzed 4,818 genes obtained via RNA sequencing of 146 species of beetles and closely related insects.

The researchers estimated that beetles evolved around 327 million years ago, during the Carboniferous Period, and reported that most modern-day beetle groups originated before the end of the Cretaceous Period 66 million years ago, when the dinosaurs went extinct.

According to the authors, beetles thrived after acquiring plant cell wall–degrading enzymes that allowed the insects to eat plants. As flowering plant species grew more diverse, so did beetles. The team writes in the report that the genes for these enzymes were probably acquired from fungi and bacteria through multiple instances of horizontal gene transfer, the movement of genetic material between organisms that are not parent and offspring.

“Our findings show how large-scale genomic data can reveal new insights into the evolution and genomic basis of insect biodiversity and underscore the intimacy and complexity of the relationships between insects, plants, and microorganisms,” the authors write in the paper. 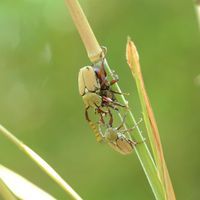 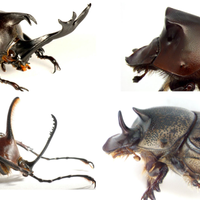 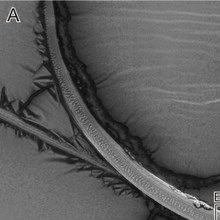