Depictions of the skulls and brains (colored portions) of extinct and living caviomorph rodents. Neoeplibema acreensis (top) had a lower estimated brain mass than expected for its body size compared to the four other main lineages of caviomorphs (below).
J.D. Ferreira et al., 2020

The extinct Neoeplibema acreensis, one of the largest rodents to have lived in South America,  weighed up to 180 pounds and had a remarkably small brain, according to a study published on February 12 in Biology Letters.

Researchers in Brazil estimated the size of N. acreensis’s brain using CT scans of fossilized skulls and a number of equations for calculating brain mass relative to body mass.

“The first method predicted a brain weighing about 4 ounces, but the volume suggested a dinky 1.7 ounces,” reports The New York Times. “Other calculations, used to compare the expected ratio of the rodent’s brain and body size with the actual fossil, suggested that N. acreensis’s brain was three to five times smaller than one would expect.”

Big brains come with big energetic costs, and because the N. acreensis’s environment lacked active predators, the authors write in their paper, the rodents were able to survive despite their tiny brains. 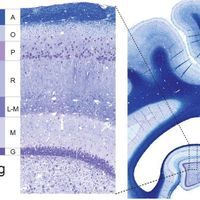