Stony coral tissue loss disease is killing at least 20 species of Caribbean corals, according to Blake Ushijima, a postdoc at the Smithsonian Marine Station in Fort Pierce, Florida. The disease was first identified off the coast of Florida in 2014. Although the damaged corals may look similar to ones that have undergone bleaching from warm ocean temperatures, the symptoms are different. Bleached corals are pale because they lose symbiotic algae, while stony coral tissue loss disease (SCTLD) turns corals white from the destruction of soft tissue that eventually kills the animal. “The white portion is actually just exposed skeleton, which is all that is left after the disease infects many coral colonies,” Ushijima tells The Scientist.

The left photo shows a fragment of Pseudodiploria strigosa (brain coral) with an SCTLD lesion on the lower left corner. On the right, SCTLD spread to the entire fragment 3.5 days later.
KELLY PITTS

The pathogen that causes SCTLD is unknown, but researchers have determined that bacteria play a role in the disease’s progression. Ushijima and other researchers are developing probiotics from disease-resistant coral colonies to treat diseased corals and protect ones that haven’t been infected. 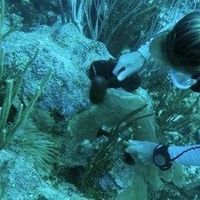