Researchers have created small metal objects that can stay afloat even after being punctured and submerged, according to a paper published last Wednesday (November 6) in ACS Applied Materials and Interfaces. Led by Chunlei Guo at the University of Rochester, the team made extremely hydrophobic, or water-averse, aluminum plates by etching microscopic, air-trapping patterns onto the metal’s surface with short laser bursts. They then connected two plates parallel to each other with a plastic post, which created an even more hydrophobic structure by allowing more air to be trapped in the small space between the plates.

Guo’s lab was inspired in part by animals such as diving bell spiders (Argyroneta aquatica) and fire ants (genus Solenopsis), which have adaptations that allow them to survive in water for extended periods of time. The spiders can form a dome-shaped web of air, or diving bell, underneath the water’s surface, while a group of fire ants can link together to turn themselves into a floating raft, increasing their water repellency.

Demonstration of the metal's floating capabilities
UNIVERSITY OF ROCHESTER

The new technique could be useful for increasing the buoyancy of ocean monitoring devices, flotation aids, and even ships in the future. The etching process that the lab developed “could be used for literally any metals, or other materials,” says Guo in a news release. 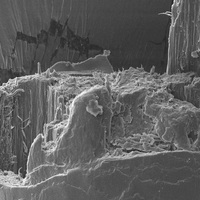 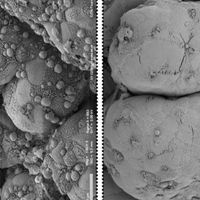