ABOVE: The subplate (bright blue layer above the orange cells) sits directly below the developing human cortex.
LABORATORY OF STEM CELL BIOLOGY AND MOLECULAR EMBRYOLOGY AT THE ROCKEFELLER UNIVERSITY

At times a predominant layer of the developing brain, the subplate disappears in the adult human brain—or so researchers believed. In findings published in Cell Stem Cell on June 21, scientists propose that neurons from the human subplate, which underlies the tissue that will become the cortex, relocate into the cortex.

The researchers found high levels of a protein, known to help cells migrate into the cortex, in stem cell–derived subplate neurons.

These relocated subplate cells may be associated with neurological diseases. “A lot of the genes associated with autism are first expressed in the subplate,” M. Zeeshan Ozair, a coauthor on the paper, says in a statement. “And if subplate neurons don’t die but instead become part of the cortex, they will carry those mutations with them.” 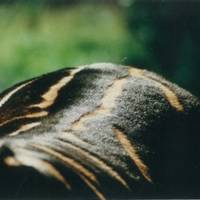 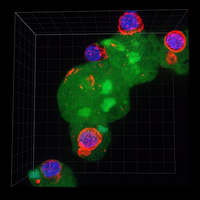