ABOVE: A healthy Loa water frog photographed in 2015 (left) compared to a malnourished frog collected from the same habitat August 2019
(LEFT) CLAUDIO SOTO AZAT, (RIGHT) MINISTRY OF HOUSING AND URBANISM OF CHILE

Conservationists and government officials in Chile have collected the few remaining Loa water frogs (Telmatobius dankoi) from a dwindling stream near the city of Calama, the Global Wildlife Conservation organization announced. The critically endangered animals were relocated to the National Zoo of Chile where scientists aim to start a conservation breeding program.

Sixty-three known species of water frogs live between Ecuador and Chile and each tend to inhabit a very specific microenvironment. All Loa water frogs shared their home in a single stream in the Atacama desert, but most of their limited water supply has been extracted for nearby mining, agriculture, and real estate development. Only 14 frogs remained in the stream when they were collected on August 3. While the animals adjust to life in the zoo, conservationists hope to restore and establish new protections for the frogs’ habitat.

“So far things have gone well. But we are not finished,” says Claudio Soto Azat, co-chair of the IUCN SSC Amphibian Specialist Group Chile, in the announcement. “This is just the first step in what is going to be a long and complex endeavor to eventually return the Loa Water Frog to the wild.” 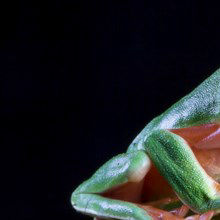