ABOVE: The hinges of kinetic-shelled turtles such as Terrapene ornata contain collagen-rich (red) and hardened, or cornified (yellow), tissue.
GERARDO ANTONIO CORDERO

Several small-bodied turtle species are able to open and close part of their shells as they extend or withdraw their heads and limbs. This so-called shell kinesis is possible because of a flexible hinge joint in the shell that has evolved independently at least eight times in the turtle family tree.

Gerardo Cordero of Iowa State University and colleagues studied the development of this joint, which forms slowly during the early years of a turtle’s life, in live animals and in preserved museum specimens.

They found that the hinges develop through a gradual tissue repatterning that increases the proportion of collagen-rich, elastic connective tissue at the joint and ultimately allows movement.

While some turtles have fixed shells (left), other species—particularly small-bodied turtles—have flexible hinges that allow them to close and open their shells (right).
GERARDO ANTONIO CORDERO, KEVIN QUINTEROS 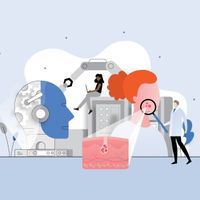