A hydra in a microfluidic device
RICE UNIVERSITY

Researchers at Rice University are trapping hydrae in microfluidic chips to study the connection between their primitive nervous systems and muscles, according to a study that appeared in Lab on a Chip July 26.

“The hydrae can have any number of circuits, reorganize in different ways and still perform relatively similar behaviors,” coauthor Jacob Robinson, an engineer at Rice University, says in a statement. “That makes them really fun to study.”

By keeping them contained within chips and restricting their movement, Robinson’s lab can study the hydra one-at-a-time for hours as it shrinks, flexes, and moves, as well as measure neuronal activity. The scientists hope to define neural frameworks that may have been conserved in bigger creatures. 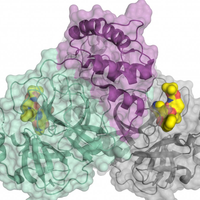