Scientists thought that zebra finches, a type of songbird, only learned by imitation. But new research shows that they also respond to an audience’s feedback, according to a study published February 18 in Current Biology.

The scientists observed young male zebra finches working to learn their tunes. Some juvenile birds were given feedback after singing in the form of a video of a female bird performing arousal behaviors, fluffing up its feathers and bobbing side-to-side. These juveniles eventually developed songs that more closely matched that of an adult “tutor” than young birds that saw the video of the female at intervals not corresponding to their own singing. Even though the feedback didn’t reflect the song quality, the social cues likely encouraged the young finches to continue their practice, according to the researchers. 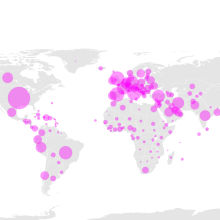