A Harris hawk flying through the experimental set-up
GRAHAM TAYLOR

Researchers used high-speed cameras to observe the flight trajectories of hawks as they flew toward a manmade target that moved erratically. The scientists analyzed the trajectories and reported in Nature Communications on June 11 that the hawks navigate to the target in a way that is similar to homing missiles. This kind of flight “promotes tail-chasing and is not thrown off by erratic manoeuvres” and fits the hawk’s hunting style of chasing agile prey through cluttered environments, the authors write.

A Harris hawk banks to turn when closing in on the artificial target. It appears to keep its eyes level and directed at the target.
GRAHAM TAYLOR
Related Articles 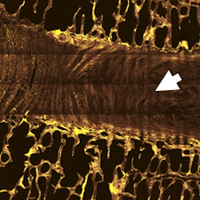