ABOVE: A 3-D analysis of cilia on a nasal airway cell from a patient with primary ciliary dyskinesia. The white box indicates abnormalities in protein distribution along the axoneme, or central strand, of a cilium.
Z. LIU ET AL., SCIENCE TRANSLATIONAL MEDICINE, 2020

Anewly developed imaging toolbox may improve the detection of primary ciliary dyskinesia, a genetic lung disorder characterized by impaired motility of the cilia, the slender organelles protruding from cells that employ sweeping motions to move mucus along the airway. According to the developers of the new technique, which was described March 18 in Science Translational Medicine, the diagnosis of PCD is often delayed due to the limitations of current tests and a lack of awareness. They report that super-resolution microscopy on nasal airway cells from PCD patients can identify proteins in the wrong locations, defects in cellular structure, and impaired beating movements in the cilia.

These imaging techniques produce quantitative results that improve upon current, nonquantitative diagnostic methods, the authors write in the paper, and may also be applied to other diseases in which defects in cilia play a role. 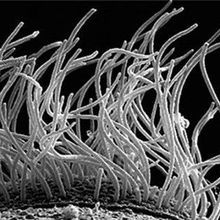 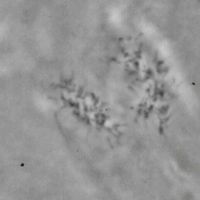