A killer whale call is played 10 seconds into the recording, when a pilot whale responds by vigorously moving (splashing sounds). RESEARCH AND PHOTO COLLECTED UNDER NMFS PERMIT BY ARI FRIEDLAENDER. AUDIO BY MATTHEW BOWERS.

Not all orcas eat ocean-going mammals, such as dolphins and seals. Some favor fish. Research published in the Journal of Experimental Biology on June 12 puts forward evidence that dolphins and pilot whales can distinguish between the calls of predatory killer whales and those that refrain from eating aquatic mammals. 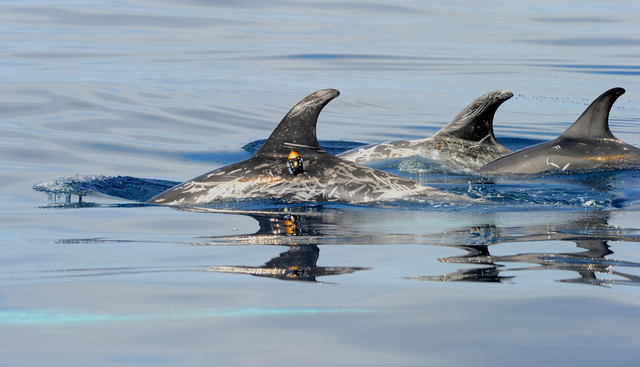 A group of Risso’s dolphins off the coast of southern California. One dolphin is carrying a multi-sensor acoustic recording tag that is used to measure the response of the dolphins to sounds of their predators. RESEARCH AND PHOTO COLLECTED UNDER NMFS PERMIT BY ARI FRIEDLAENDER.

The scientists attached a data-logger to one member of each pod of dolphins and pilot whales to record their responses...

Surprisingly, the predatory killer whale calls were structured similar to human and other mammalian distress sounds.

“We suggest that these calls convey information about the predators’ behavior or intent,” Matthew Bowers, a coauthor on the study, says in a statement.