Species tend to have eyes specifically adapted for the light conditions of their habitats. Usually, this involves tweaking the ratio of the two main types of photoreceptors in their retinas: cone cells, which are required for color vision but require high light intensities to function, and rod cells, which work well in low light but don’t aid color vision.

Deep-sea fish that live in areas where the sun doesn’t penetrate have often lost their cone cells entirely. Deep-sea-dwelling pearlsidespecies (Maurolicus spp.) don’t live exclusively in the dark, but they come to the surface at dawn and dusk. Rather than using two different types of photoreceptor, neither of which will function optimally in their habitat, pearlsides have evolved an efficient and economical solution to optimize vision. Scientists have now found that they have evolved an entirely new type of photoreceptor to see in such conditions. Their retinas... 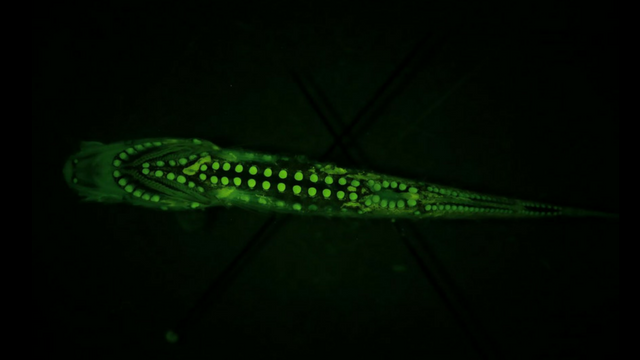 Like many other deep-sea fish, the Mueller’s pearlside (Maurolicus muelleri) has bioluminescent photophores for emitting light on its ventral side, which are visible under fluorescent light.WEN-SUNG CHUNG / UNIVERSITY OF QUEENSLAND