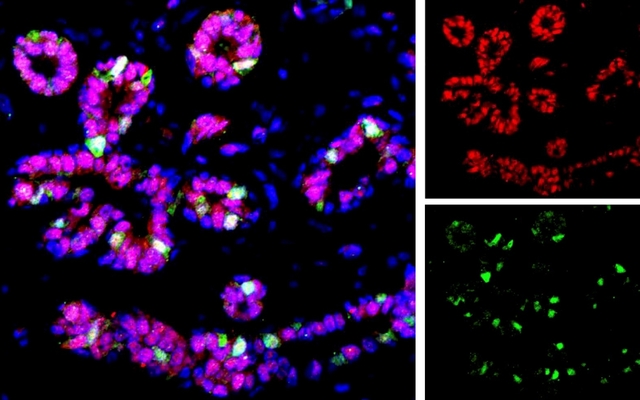 Two distinct cell types are present in the inner layer of human breast epithelium, labeled in green and red, with the nuclei appearing blue.KAI KESSENBROCK, PhDResearchers have characterized the cell types in women’s breast epithelium, finding more cell types existing there than previously documented, according to findings published May 31 in Nature Communications. Previously, the inner layer of the epithelium, which forms the breast’s ducts and from which breast cancer starts, was thought to contain two types of cells. On analyzing gene sequences from 25,790 cells of mammary tissue, researchers found one of these cell types in its outer layer essentially consisted of two distinct varieties.

“Our analysis provides unprecedented insights into the diverse cellular populations that exist within the normal human breast epithelium and will serve as a valuable resource to understand how the system changes during the early stages of breast cancer and as...