It’s not clear what exactly the tardigrade in this video is up to. It might “actually be stuck to this bubble due to surface tension,” says Scott Chimileski, one of the researchers at the Harvard Microbial Sciences Initiative who filmed the video, in an email to The Scientist. Chimileski and Rebecca Stern used phase contrast microscopy to capture the tiny water bear in action.

The microscopic animals, which have been found all over the globe and can survive in the vacuum of space, will be featured in their book Life at the Edge of Sight: A Photographic Exploration of the Microbial World (Harvard University Press, 2017). Tardigrades will also be starring in live demonstrations at the Microbial Life Exhibition, which opens February 17 at the Harvard Museum of Natural History. 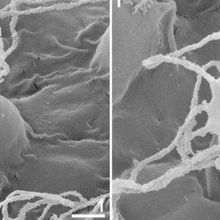