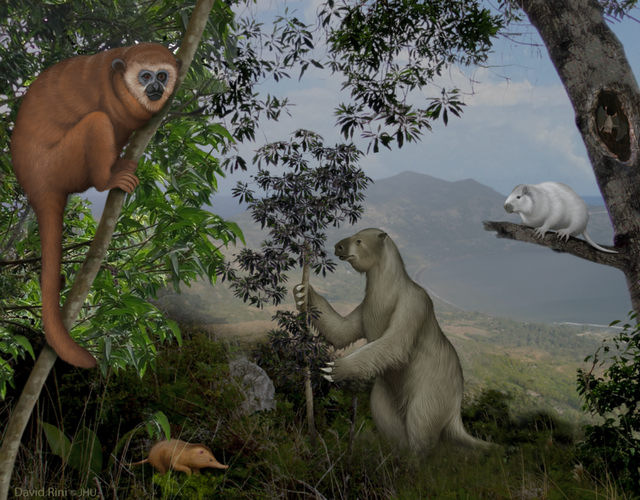 Artist’s impression of the “lost world” of Caribbean mammals before the arrival of humans, which included ground sloths, monkeys, rodents, a vampire bat, and shrew-like insectivores.  DAVID RINI, JOHNS HOPKINS UNIVERSITYWhy so many mammals went extinct at the end of the last Ice Age 10,000 years ago has long puzzled scientists. The end of the Ice Age coincided with the arrival of humans in much of North America, so it’s hard to pinpoint the exact cause of the extinction.

In Caribbean islands, however, the arrival of humans and the end of the Ice Age is thousands of years apart, making a good case study to explore what happened. In a comprehensive analysis of extinction events across the Caribbean, scientists found evidence for two waves of species die-offs, both of which coincide with the arrival of humans. The first wave occurred around 5,000 years ago when humans first arrived, and the second...

Large animals such as the ground sloth were wiped out during the first extinction, and smaller animals including many unique rodents disappeared in the second wave. The reasons appear to be a combination of landscape transformation, hunting, and the introduction of invasive mammals to the islands.