ABOVE: Thermal image of an orangutan hanging from a vine
LIVERPOOL JOHN MOORES UNIVERSITY/WWF

Researchers from Liverpool John Moores University, the World Wildlife Fund, and HUTAN-Kinabatangan Orangutan Conservation Programme are using thermal cameras attached to drones to survey the orangutan population in the forest canopies of Sabah, Malaysia. They were able to do this by borrowing thermal imaging and analysis techniques previously used to study light from stars.

Images from morning or evening flights are most reliable because the ground has not yet warmed to a temperature that is too similar to that of the animals’ body temperatures. The group is using the thermal data to develop a machine learning algorithm to differentiate animal species. In addition to the orangutans, they also spotted proboscis monkeys and pygmy elephants.

“In thermal images, animals shine in a similar way to stars and galaxies, so we used techniques from astronomy to detect and distinguish them. . . . We could see the orangutans quite clearly because of their body heat, even during fog or at night, ” says Claire Burke of Liverpool John Moores University in a press release.

“All orangutan species are critically endangered and monitoring their numbers is crucial for their conservation,” says Serge Wich of Liverpool John Moores University in the release. This method of counting the population is less time-consuming and may be useful in the future for conservation efforts.

The researchers are presenting their results at the Unifying Tropical Ecology symposium this week, hosted by the British Ecological Society.

Thermal cameras on drones capture the movement of an orangutan in the canopy and pygmy elephants on a path.
LIVERPOOL JOHN MOORES UNIVERSITY/WWF 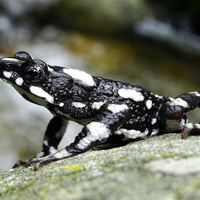