Researchers have even documented sleep-like behavior in cultures of glial and neural cells. By increasing the number of electrophysiological measurements we use to characterize sleep states, the homology between sleep-like states in culture and sleep in intact animals becomes stronger. 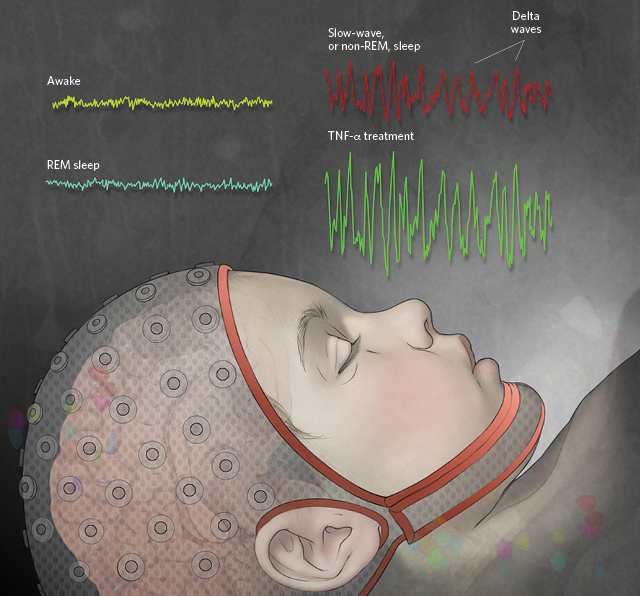 Mammalian sleep is characterized by several stages, typically measured using an electroencephalogram (EEG), which involves the recording of brain activity from an array of electrodes on the scalp. Rapid-eye movement (REM) sleep, the stage during which vivid dreams occur, is characterized by EEG waves similar to those observed during waking. High-amplitude delta waves (0.5–4 Hz) occur at the deepest stage of non-REM, or slow-wave, sleep. Both the presence and amplitude of these delta waves are used to characterize sleep in whole animals. When treated with the somnogen tumor necrosis factor α (TNF-α), the brain produces higher-amplitude delta waves, indicating a deeper stage of... 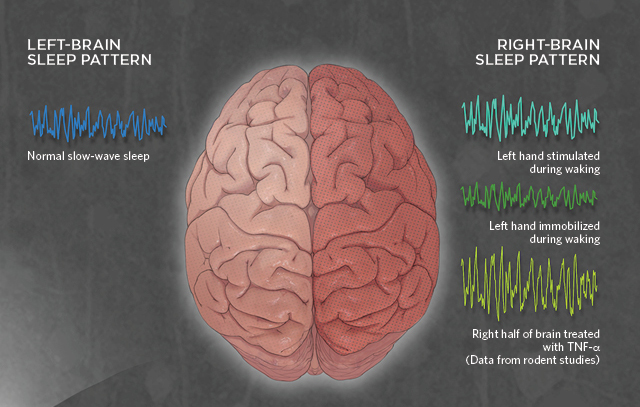 Research has also yielded evidence that the brain’s two hemispheres can sleep somewhat independently of each other. When a person holds a vibrating wand in the left hand during waking, for example, he stimulates only the right side of the somatosensory cortex, and in subsequent sleep, the right side of the brain exhibits higher amplitude EEG slow waves than the left side, indicating greater sleep intensity. Conversely, if a person’s left arm is immobilized during waking, amplitudes of EEG slow waves from the right side of the brain are lower than the left side during subsequent sleep. These half-brain measurements indicate that local sleep depth is a function of activity during waking. Moreover, rodent studies have shown that TNF-α treatment to only half of the brain will invoke higher than normal delta waves during sleep only in that hemisphere. 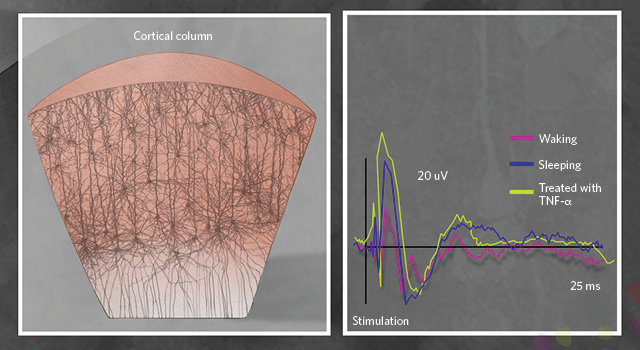 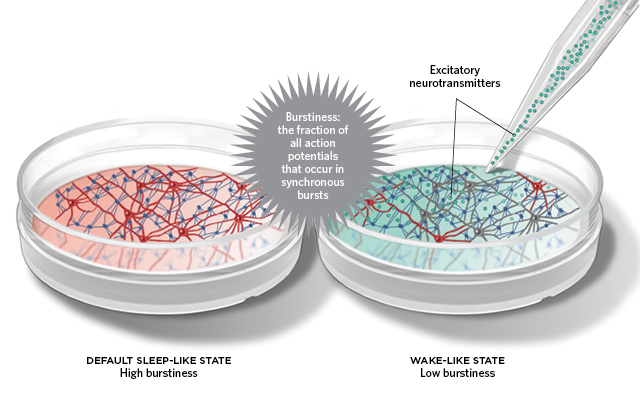 Neurons co-cultured with glial cells display patterns of action potentials and slow
(delta) waves, suggesting that small neural networks can and do sleep, even outside of the body. In culture, neurons fire in bursts, and slow-wave electrical activity is synchronized while in a default sleep-like state. However, if the culture is stimulated with electricity or excitatory neurotransmitters, delta-wave amplitude and the neurons’ synchrony, or burstiness, are reduced, suggesting that the culture “wakes up.” Conversely, the addition of TNF -α, a sleep-inducing agent, increases burstiness and the
amplitudes of delta waves.