When we’re sick, we want to feel better—immediately. Our bodies set out to accomplish this goal by activating the immune system to vanquish the invader as quickly as possible. Vaccines help prepare the immune system for this fight, while antibiotics or antiviral drugs serve as its allies on the battlefield, targeting the pathogens and preventing them from multiplying and spreading in the body.

But often what makes us sick is our own immune response. It’s why we take pain or fever-reducing medicine such as acetaminophen, which doesn’t affect the illness-causing pathogen at all, but does quiet the inflammation that is causing symptoms. Recently, scientists have come to realize that the body can similarly work to promote health by quelling an immune response and minimizing the damage from an invading pathogen. They are beginning to piece together some of the ways disease tolerance can protect the body from damage during infection.

Mammalian guts teem with symbiotic bacteria, which might actually help us tolerate microbes of the pathogenic variety. Severe infection with Salmonella typhimurium can sometimes trigger muscle and fat tissue in a host to waste away. But, researchers found, when mice had a symbiotic E. coli in their guts, they didn’t suffer as much damage to their tissues. Giving E. coli to mice that lacked the symbiotic strain revealed that, upon infection with Salmonella, the resident microbe moves to the adipose tissue. There, it triggers a hormone response that protects against fat and muscle breakdown, easing the animals’ recovery (Science, 350:558–63, 2015). 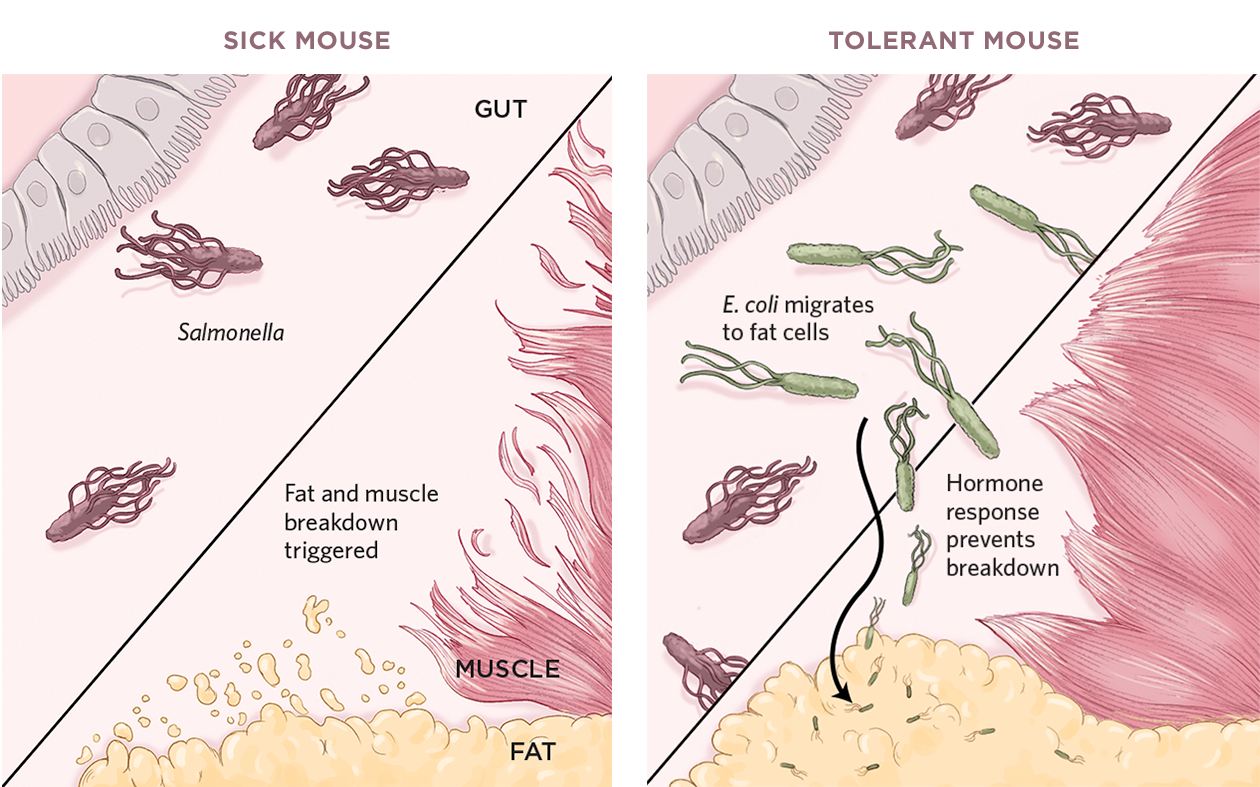 When pathogens invade a host, they need sugar along with essential nutrients such as iron to survive. Many pathogens break down the blood protein hemoglobin to get iron, which leads to extra molecules of heme byproduct in the blood. That excess heme tamps down the activity of an enzyme called glucose 6-phosphatase (G6Pase) that is essential for producing glucose in the liver. Without glucose production, sugar levels in the blood drop, sometimes so low that the host dies. In mice with high levels of ferritin, an iron-storage protein, glucose production doesn’t slow down, allowing the body to tolerate infection by multiple pathogens. Supplementing with a protein that grabs iron to make ferritin saved mice that were succumbing to the infection (Cell, 169:1263–75.e14, 2017). 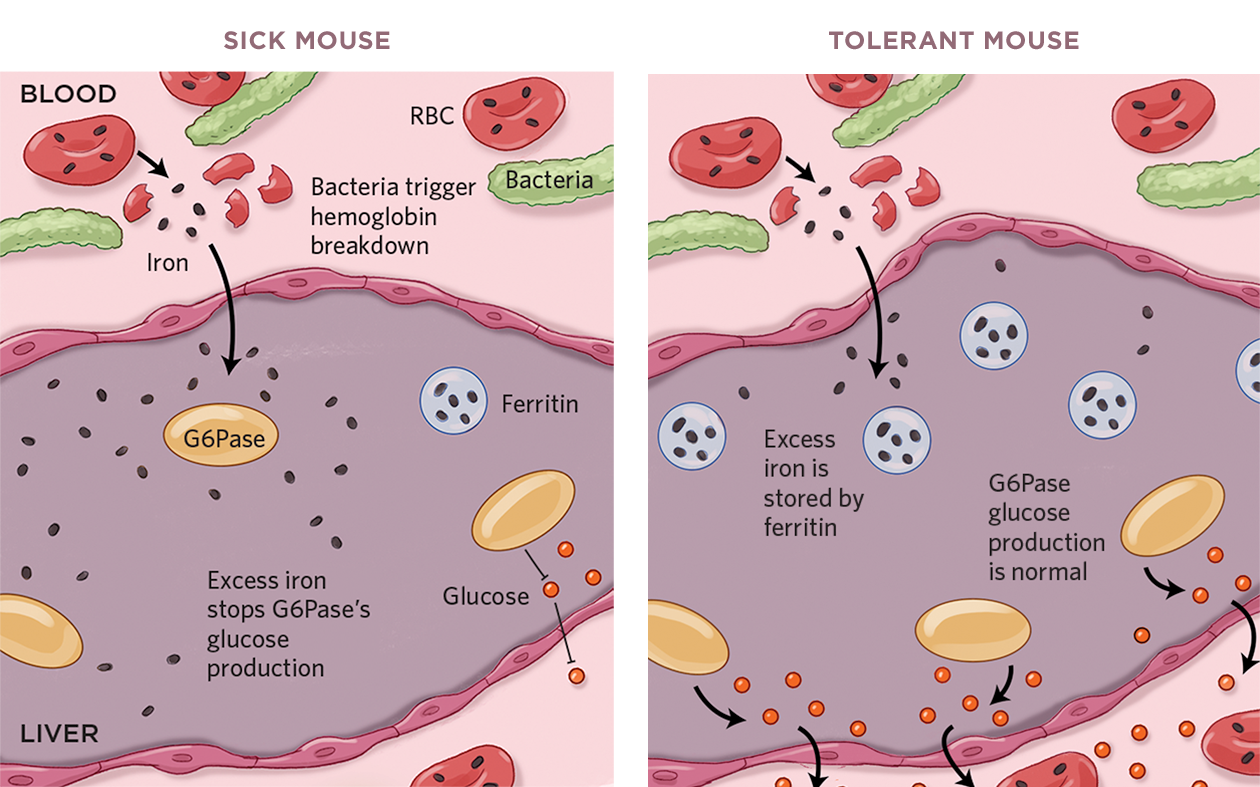 In one experiment, researchers showed that when a mouse’s small intestine produces glucose during a Citrobacter rodentium infection, sugar molecules are absorbed into epithelial cells and then released into the bloodstream. This can feed the pathogen, heighten the immune response to the invader, and lead to the host’s demise. However, when infected mice were fed an iron-rich diet, glucose wasn’t as easily absorbed from the intestine, leaving it available for the pathogen to consume. Having access to the glucose led to mutations in the virulence genes of the bacteria, rendering them less pathogenic and allowing the bacteria to live peacefully in the body (Cell, 175:146–58.e15, 2018). 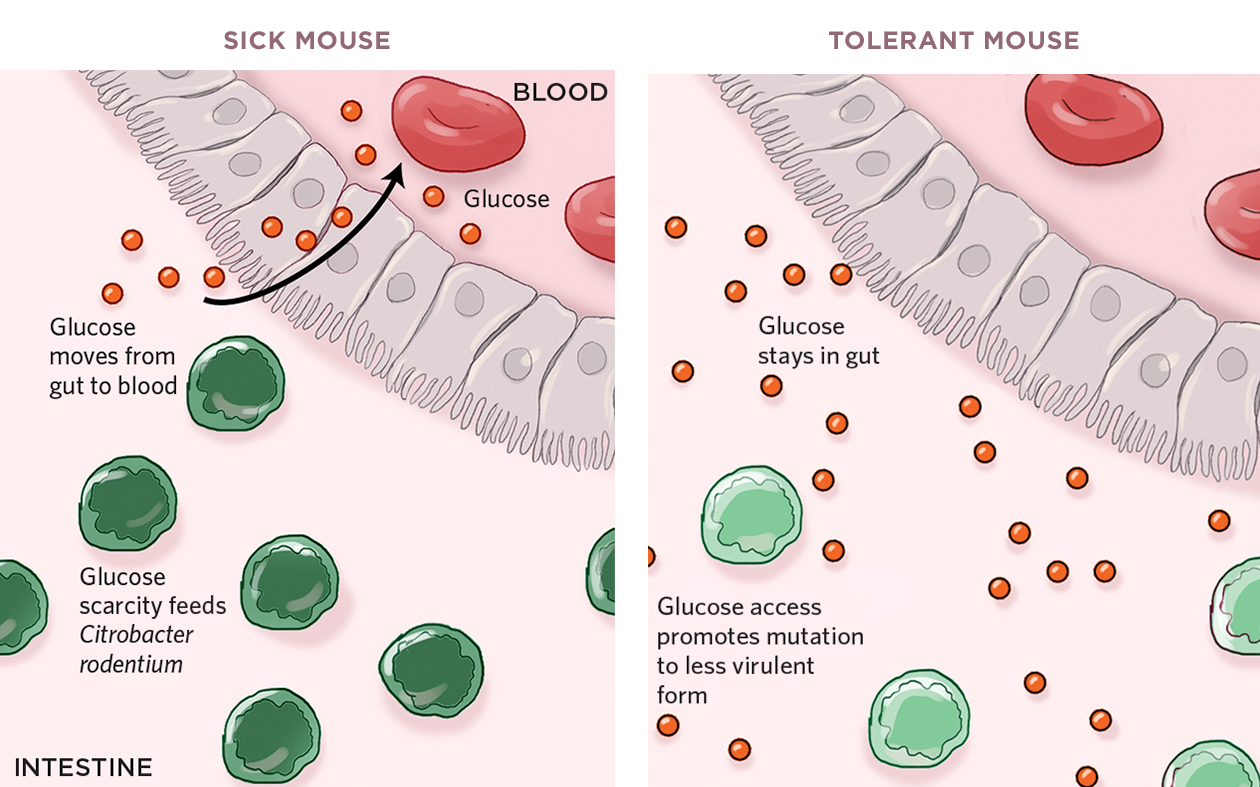