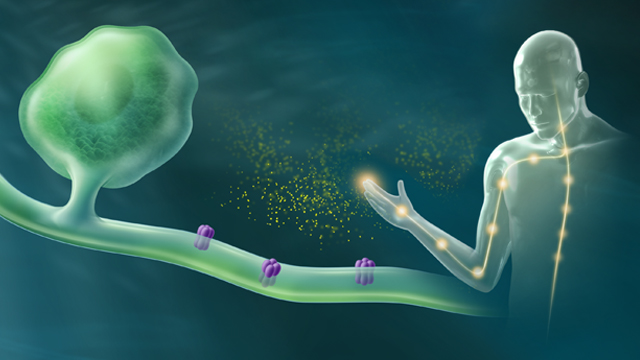 NaV1.7 controls the passage of sodium ions into sensory neurons. Hyperactivity in NaV1.7 is associated with increased firing in pain-sensing neurons—and thus agony even in the absence of painful stimuli—while deletion of the channel appears to cause pain insensitivity.

INACTIVATED
For a short period following opening, the voltage-sensing domains remain open, but the pore is blocked by a positively charged particle in a ball-and-chain mechanism.

OPEN
Voltage-sensing domains open during an action potential to allow sodium ions to flow into the neuron.

Many companies are working to develop molecules that inhibit the NaV1.7 channel. But while the basics of the protein complex’s function are well established, researchers are still learning how best to target NaV1.7 in order to achieve analgesia. Early attempts to inhibit the channel used small molecules to block the pore region, but because this pore is well-conserved among the NaV family, these drugs generally showed low selectivity for NaV1.7. Recent efforts have targeted the less-conserved voltage-sensing domains of NaV1.7 to lock the channel in a closed or inactivated state. Hitting the right part of the protein is not the only challenge—even with the development of apparently highly potent NaV1.7 blockers, researchers are now questioning just where along a sensory neuron a drug needs to act in order to be maximally analgesic. 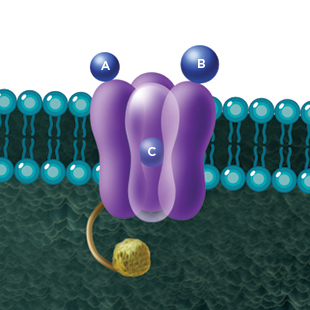 A. Small molecules that target NaV1.7’s voltage-sensing domains show high specificity for the receptor, and have shown promise in early stage trials.

B. Toxin-derived peptides also show high specificity for NaV1.7’s voltage-sensing domains, and promising preclinical results have piqued the interest of a handful of companies.

C. Drugs that target the channel’s pore are relatively nonselective, and few are currently being pursued as analgesics. 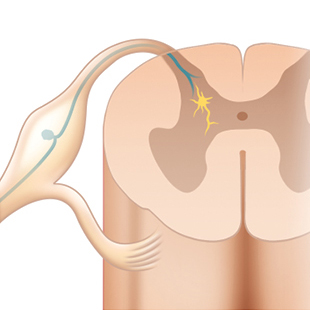 © THOM GRAVEThe failure of many supposed NaV1.7 blockers to effectively blunt pain has some researchers questioning the assumption that inhibiting NaV1.7 in the periphery is sufficient. Because sensory neurons often have axons that terminate inside the central nervous system, drugs targeting NaV1.7 may need to cross the blood-brain barrier to boost their painkilling effect.