In the first hours after fertilization, maternal factors residing in the oocyte cytoplasm dictate early development. But soon, the zygote’s genes start to take over. This maternal-to-zygotic transition involves massive epigenetic reprogramming, from the overall structure of the chromatin to the complete resetting of methylation on the genome. (Note: Most of the information depicted below is based on studies of mouse embryos; there are some differences in the timing of these events in human embryos.)

Chromatin changes
In sperm, chromatin is very compact; the overall accessibility of the chromatin in the oocyte, which is still undergoing meiosis, is unclear. Shortly after fertilization, chromatin in both pronuclei undergoes major restructuring, taking on an open configuration before reestablishing local and global organizational features.

Methylation changes
Following fertilization, the vast majority of methyl marks?on the genome are removed. The paternal genome undergoes rapid, active demethylation, while the...

Transcription changes
Messenger RNAs packaged in the oocyte are gradually depleted over the first week of development. Meanwhile, the zygotic genome undergoes multiple rounds of activation, with the genes expressed early on playing key roles in embryonic organization and cell-fate determination.

After fertilization, the genomes donated by the sperm and the egg lose many of the organizational features of their chromatin, which must be reestablished in the early embryo. One recent study showed that the paternal pronucleus of the single-cell zygote contained global features known as compartments, in which more-active regions of the genome associate with other active regions, while less-active regions associate more closely with one another. The maternal pronucleus, however, largely lacked compartments. In this study, both pronuclei had local features known as topologically associated domains (TADs), though other studies have failed to identify these organizational characteristics until later in the first week of development. 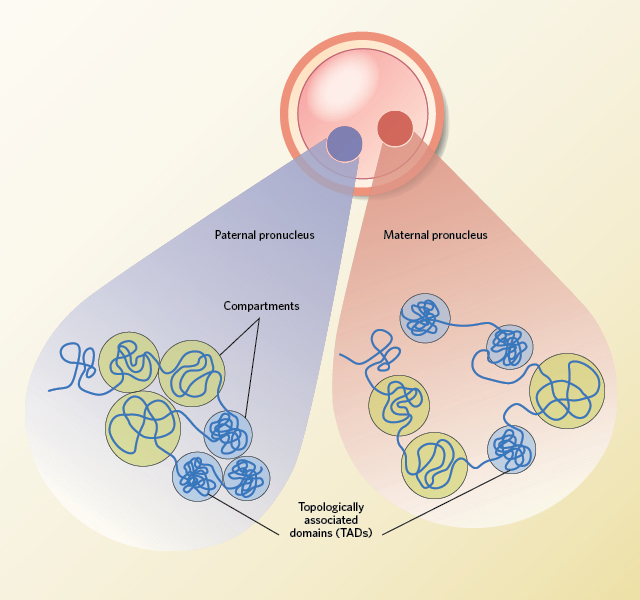 There are likely many mechanisms governing the global demethylation of the zygotic genome following fertilization. One mechanism at play in the paternal pronucleus involves the excision of the methylated DNA by breaking and repairing the double helix. As those breaks are repaired, nonmethylated cytosines are inserted where methyl marks used to reside. One recent study showed that if these breaks are not repaired, the embryo delays the first cell division. 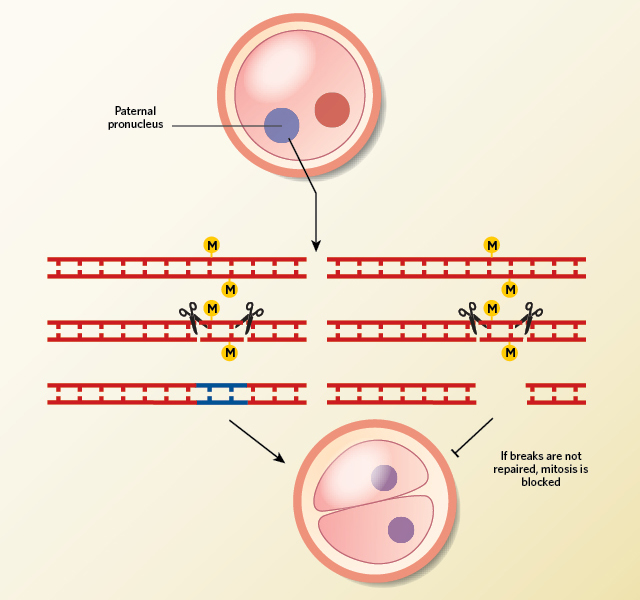 Recent research has shown that cell-fate bias stems from methylation of arginine 26 on histone 3 (H3R26), which lengthens the time certain  transcription factors remain on the DNA. Longer binding promotes expression of genes such as Sox21 that drive cells to become the embryonic lineage (blue) that will form the fetus, while cells with shorter binding form the extraembryonic lineage (green) that becomes the placenta.