Animals harbor vast numbers of microbes in their guts, but the effect of this community on the evolutionary trajectories of the hosts is unclear. Researchers are now using a combination of experiments and observational studies to look for signs of microbiome-driven host adaptation.

Rapid evolution in an outdoor experiment 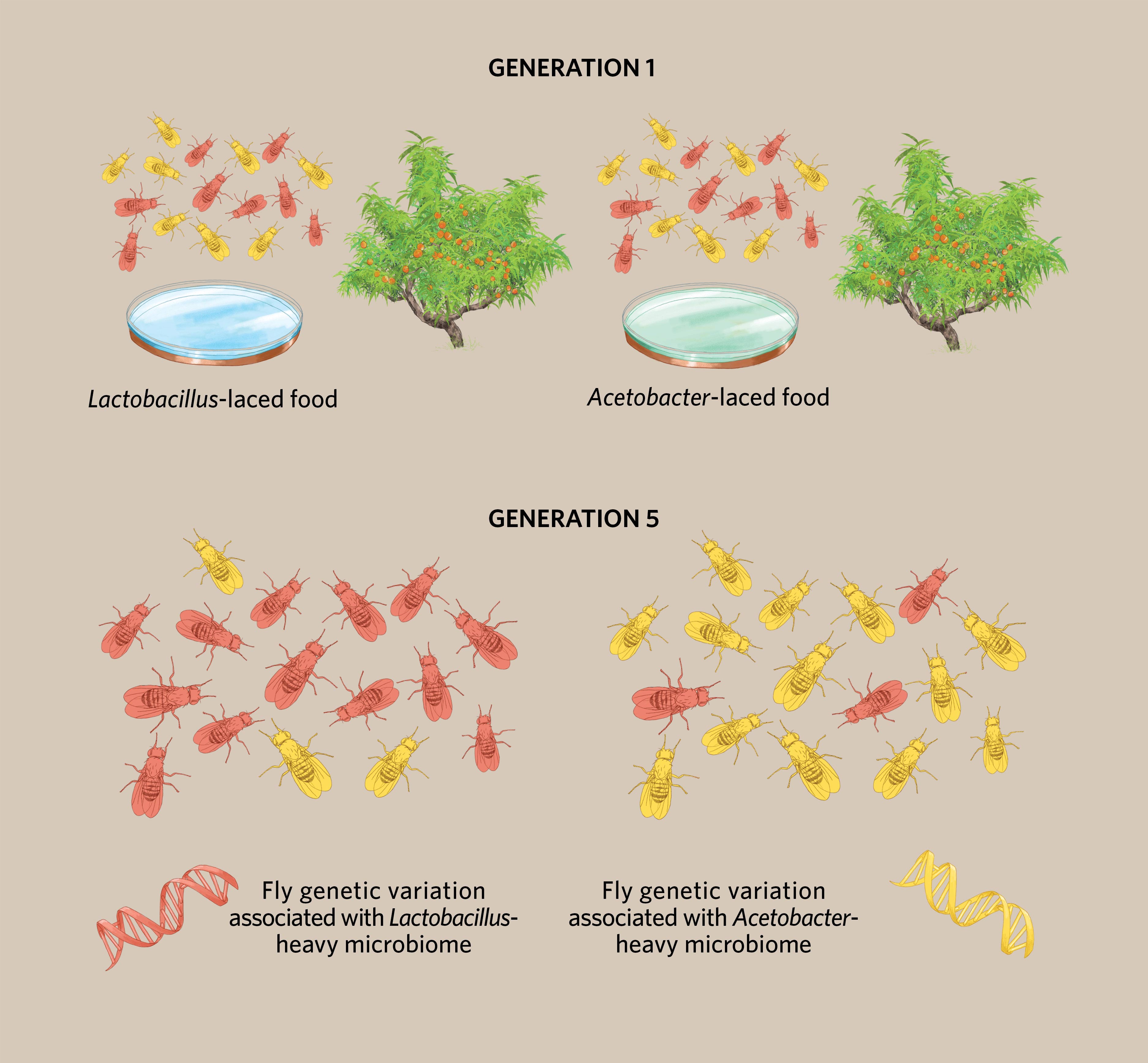 Researchers at the University of Pennsylvania split a large outbred population of fruit flies (Drosophila melanogaster) into 14 groups of 20 individuals and put each group on a peach tree enclosed with a mesh cage. Each population was given Lactobacillus-laced food (left), Acetobacter-laced food (right), or food with no bacterial addition (not shown). After five generations, the team collected the flies for genomic sequencing and found that the groups differed depending on the food they’d been given. (Graphic illustrates one possible scenario for variation at a single locus.) Some of the observed changes in allele frequencies matched variation seen in wild fruit fly populations whose diets have different concentrations of Lactobacillus and Acetobacter species, suggesting the microbes might help drive adaptive evolution in the real world, too. 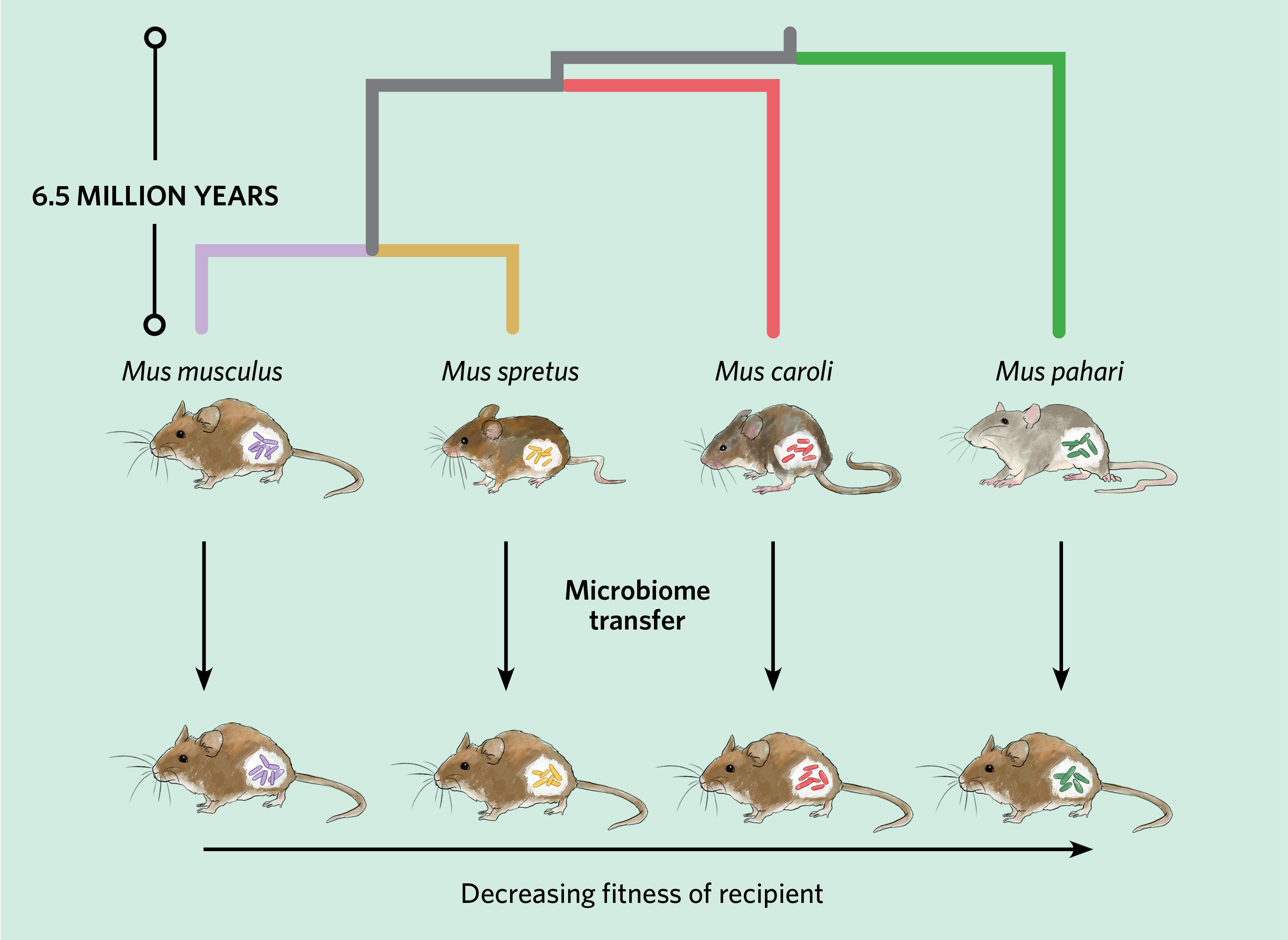 Evolutionary biologists predict that if an animal population has adapted to its gut microbiomes, then individuals in that population should suffer reduced fitness when given unfamiliar microbiomes. Researchers recently reported evidence consistent with this prediction using related species of mice. Mus musculus had higher fitness (as measured by growth and a low rate of inflammation) when implanted with microbiomes transplanted from other M. musculus than with microbiomes from three closely related species, and an individual mouse’s fitness correlated with the degree of relatedness to its donor species.

A potential microbiome-influenced adaptation in humans 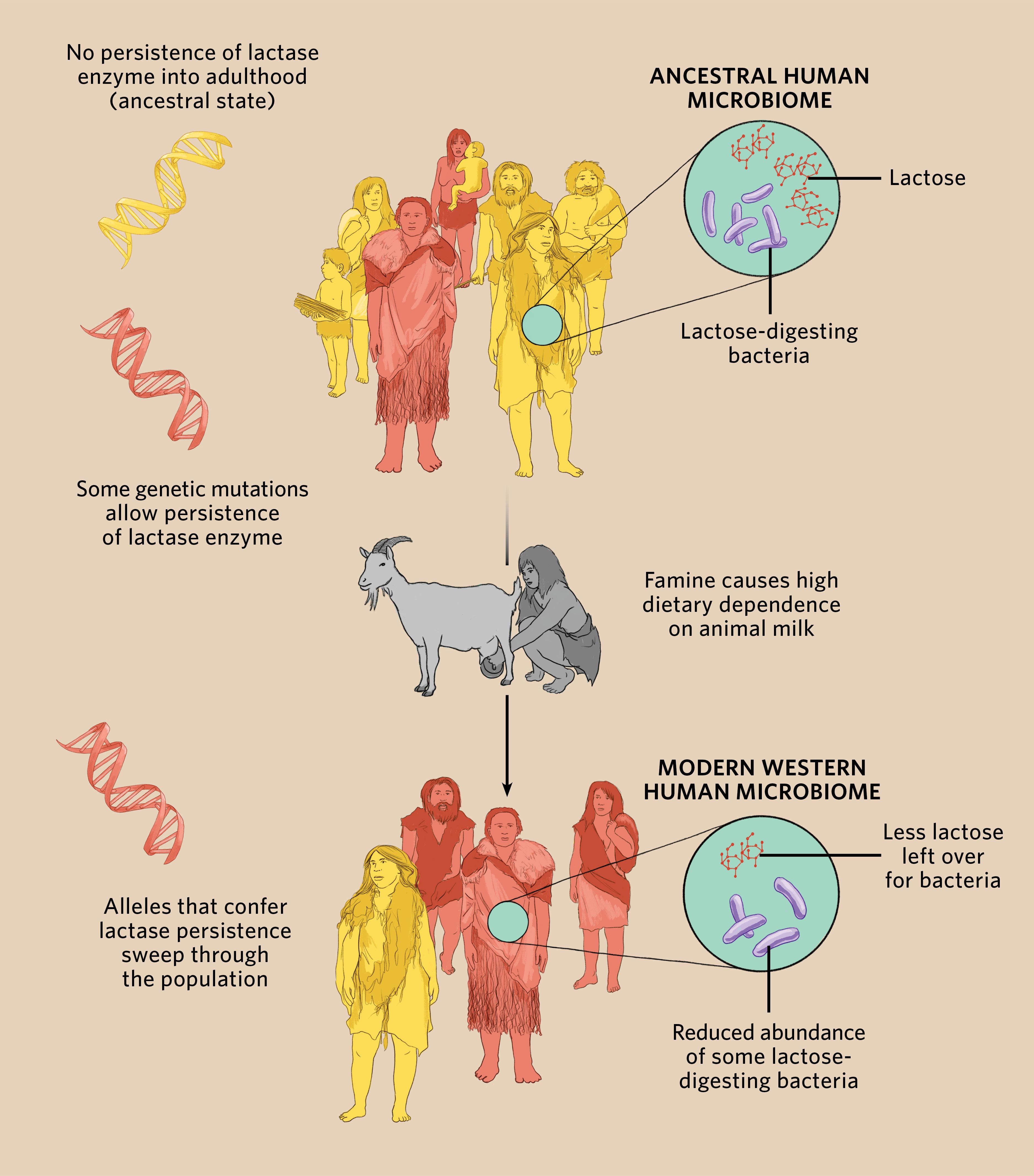 The ability of adults to digest lactose is a uniquely human trait, and some researchers theorize that its evolution may have been influenced by the gut microbiome. Like other mammals, ancestral humans would only have produced the lactase enzyme in infancy. However, unlike other mammals, these humans at some point started consuming milk in adulthood. Initially, the theory goes, they would have had lactose-digesting bacteria in their guts that broke down the sugar and used most of the energy released as a result, leaving only a little for the host. In the event that food other than milk became scarce, humans would have been under intense selection pressure to get more energy from this food source, meaning that any mutation that gave adults the ability to digest their own lactose would likely have been favored. Lactose-digesting bacteria might subsequently become less abundant in the guts of these people, as they now have to compete with the host for food—a pattern that researchers say matches with some observations of current human populations.