Differences in how researchers prepare and image samples can lead to discrepancies in their results.

Sruthi S. Balakrishnan is a freelance science writer based in Bangalore, India. After spending her doctoral days poking fruit flies in the eye, she realized that she preferred writing about...

To interrogate bacterial nanotubes, researchers first grow the bacteria in culture, then use sophisticated microscopy techniques and different readouts such as fluorescent tags to check whether cells are exchanging materials. The behavior and morphology of bacterial cells can differ depending on the specifics of each step, giving rise to varied observations and, sometimes, conflicting results.

Bacteria can be grown either on solid media or in liquid broth. Depending on the species, growth conditions can influence bacterial behavior and appearance.

Bacteria grown in both types of media have been seen to produce nanotubes, but some labs have been unable to observe them in either one type or the other.

Step 2: Test for the transfer of materials between two bacteria

Observing whole cells or colonies can reveal the transfer of fluorescent proteins, plasmids, metabolites, and more. 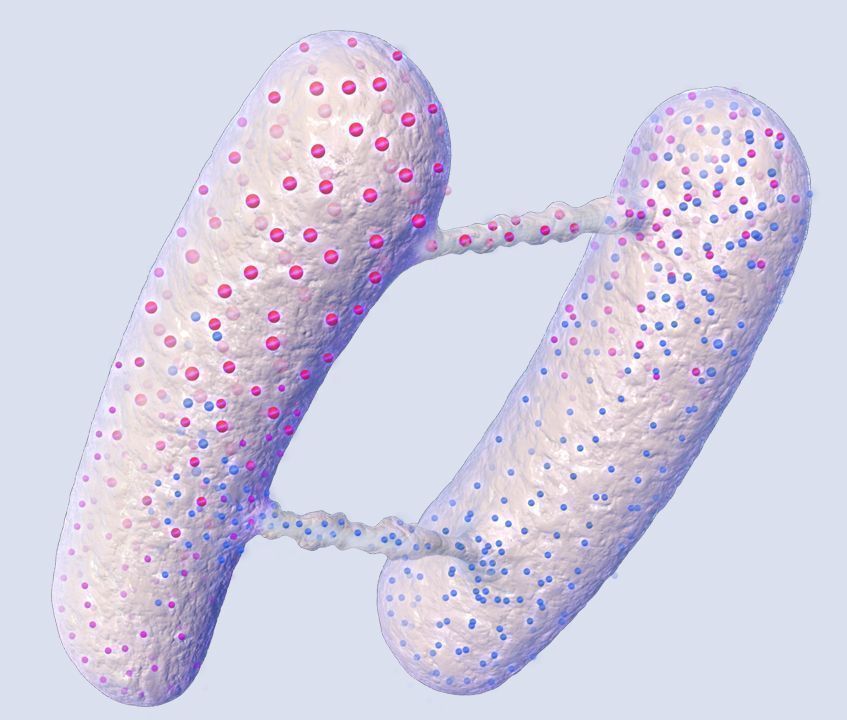 Step 3: Prepare the bacteria for imaging

For fluorescence microscopy, bacteria are either made to express fluorescent proteins or are treated with membrane-staining dyes. Glass slides and coverslips can be coated with different compounds to allow the bacteria to stick better. For electron microscopy, cells are dried and treated with heavy metals before imaging.

Differences in sample preparation can affect the reliability with which bacterial nanotubes are observed. One lab, for example, could only see nanotubes if they pressed down on the coverslip before imaging the cells, whereas other labs never needed to do so in order to observe the structures.

Fluorescence and electron microscopy, or sometimes a combination of both, are most commonly used to observe nanotubes. The structures are hard to see using fluorescence microscopy (at right), a lower-resolution form of imaging, because there are no specific markers for nanotubes. Using higher magnification electron microscopy (below), nanotubes can be easily resolved and distinguished from structures such as pili and flagella.

Nanotubes can only be identified with training and experience; scientists need to be able to distinguish them from the background noise of fluorescence microscopy and artifacts of electron microscopy.