The human NPC is composed of approximately 34 nucleoporin proteins. The interior, or “symmetric,” core is composed of an inner ring, and two outer rings that sit on either side of the nuclear envelope. The NPC symmetric core helps to stabilize the extreme curvature of the nuclear membranes abutting the pore, forms the diffusion barrier, and provides a central transport channel. On the outside, the NPC symmetric core is decorated with proteins called cytoplasmic filaments that participate in protein transport and mRNA export; on the inside, the symmetric core is associated with nuclear basket nucleoporins, which interact with chromatin and the transcription machinery. In the central transport channel, a diffusion barrier is composed of extensive amino-acid regions found in about a third of the nucleoporins called phenylalanine-glycine (FG) repeats, which are intrinsically disordered and self-assemble into a mesh-like network that prevents passive diffusion of macromolecules. 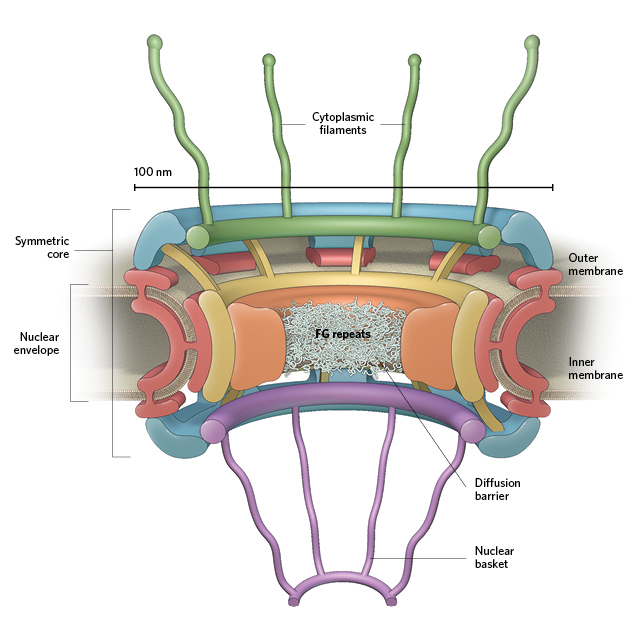 Macromolecules—including proteins, tRNAs, and even fully assembled pre-ribosomal subunits—are transported through the NPC in their native states with the help of proteins called karyopherins that bind to both target molecules and to FG repeats. Upon entering the nucleus, incoming karyopherins release their cargo when they are bound by RanGTP, the GTP-bound conformation of a small GTPase protein called Ran. For cargoes leaving the nucleus, RanGTP is often incorporated into karyopherin transport complexes inside the nucleus, but encounters the Ran-activating protein RanGAP after exiting. RanGAP triggers Ran to hydrolyze GTP into GDP, causing a conformational change and the release of the cargo into the cytoplasm. 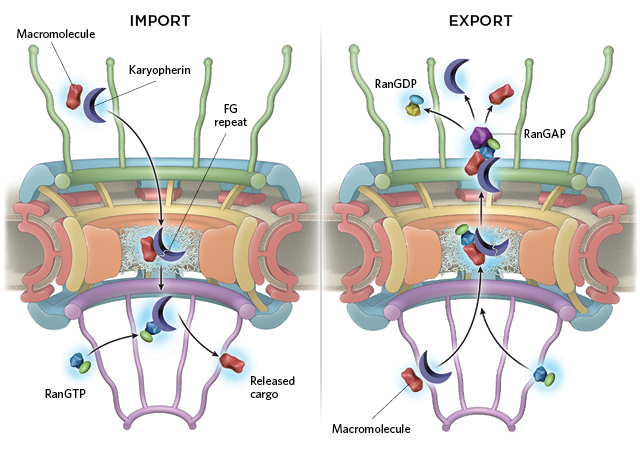 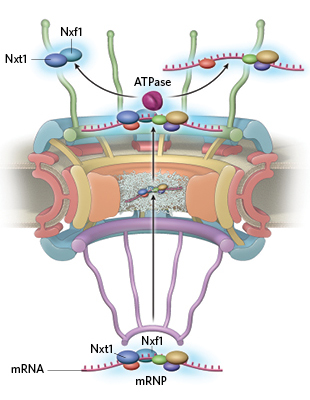 Messenger RNAs (mRNAs) transcribed in the nucleus are loaded with diverse proteins to form messenger ribonucleoproteins (mRNPs) that are exported through the NPC. These proteins include Nxf1 and Nxt1, which bind to FG repeats in the central channel. Nucleoporins on the cytoplasmic side of the pore recruit and activate an ATPase to remove Nxf1/Nxt1, freeing the mRNA to be translated by the ribosome.