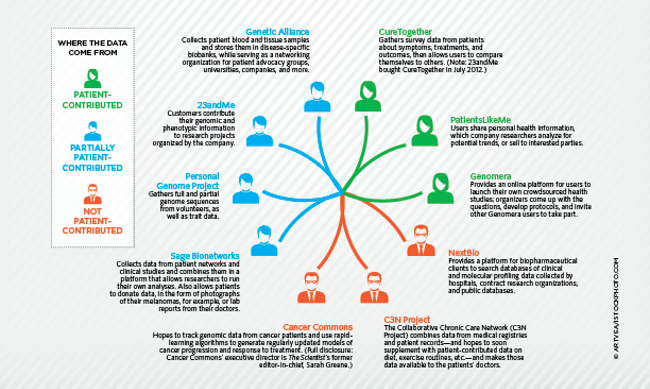 Although fully organized patient-run trials are still few and far between, patients are taking a more active role in clinical research. Now, more than ever before, patients have access to scientific knowledge as it’s reported, and advocate communities are flourishing, thanks to the wide-ranging, faster, and more accurate communication provided by the Internet. This increasing patient activism, and an accompanying willingness to share personal stories, has resulted in a veritable deluge of patient data.

“When you have gigabytes of data, perhaps hundreds of gigabytes, for each patient, that’s more data than has existed in all clinical trials combined up until a couple of years ago,” says Marty Tenenbaum, who in 2010 founded Cancer Commons, a database that collates real-time patient data and up-to-the-moment basic medical research to inform cancer treatment.

The online networking site PatientsLikeMe, for example, has accumulated more than...

But the availability of such data is only one side of the coin. Without expert analysis, patient-generated data would be useless to the drug development community. Fortunately, initiatives and companies are cropping up left and right to support and take advantage of this movement.

Among the benefits of such stockpiles of data is the ability to sift through the challenging heterogeneity of patients, their diseases, and their case information. “Clinical trials, especially as they’ve been traditionally constituted—large randomized trials—just are a disaster in cancer, because of the nature of the disease,” says Tenenbaum. “Every tumor is unique at some level.” Databases that collate genetic data, such as patient genomes or the genomes of their tumors, could facilitate the identification of biomarkers to help differentiate responders and nonresponders, speeding a drug’s path to the clinic. “It could literally slash years, if not decades, off the normal process,” Tenenbaum says.

Platforms that support patient input can also help researchers develop better benchmarks for assessing disease progression and more accurate measures of patient health, as well as point to novel indications for existing drugs and promising drug combinations. “We’re enabling a new partnership between the patients and the physicians,” says Jamie Heywood, cofounder and chairman of PatientsLikeMe, “and that new partnership should produce outcomes at lower costs with lower risks and better innovation.”