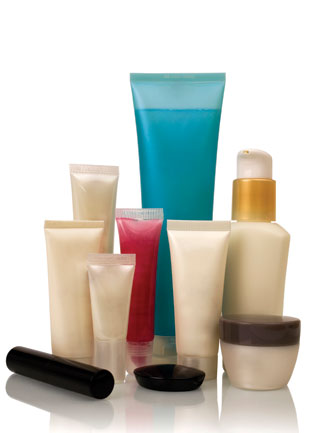 © PKM1/ISTOCKPHOTO.COMThe trendy look for this season’s cosmetics lab is high-tech instruments and tools. Researchers are using gene microarrays to understand what makes young skin taut and even-toned, and to find out why older epidermis sags, wrinkles, or develops spots. They can then hunt for molecules that activate those same genes in aging or sun-damaged skin. A number of skin-care lines, such as Olay products, already contain ingredients based on microarray work.

Another way makeup makers develop new products is to examine the metabolism of skin cells. A healthy cell, with active mitochondria, is a comely cell. Old cells with fewer or malfunctioning mitochondria look aged. Modern devices can infer metabolic rate based on oxygen consumption and the acidic by-products released by cell cultures into the media in which the cells are grown.

Cultured skin is crucial to in vitro studies of personal-care products. One of the best...

In fact, these days, product safety testing often takes place in a dish. Rarely do the methods involve using animals, which has been out of vogue for decades, notes Michael Ingrassia, senior manager for skin biology and drug delivery at Dow Pharmaceutical Sciences in Petaluma, California, where he works on the CeraVe moisturizer line. In fact, the desire to limit animal experimentation has driven the development of many modern cosmetics testing methods.

One common goal among cosmetics researchers is to make skin appear fresh and young. Signs of aging vary depending on skin tone. Light-skinned consumers are looking to minimize wrinkles, the earliest sign of aging in people with low levels of melanin in the skin. Buyers with dark, melanin-filled skin frequently seek products to diminish the darkened spots that appear in their skin before wrinkles.

To develop creams and other anti-aging remedies, researchers working at personal-care product companies use many of the same tools as their counterparts in basic research and pharmaceutical sciences. Here, The Scientist profiles four modern methods behind the makeup.

Gene expression microarrays are common tools in the personal- care products industry. In fact, Procter & Gamble (P&G) is one of the largest users of Affymetrix gene chips, processing tens of thousands of chips per year, says Jay Tiesman, leader of P&G’s genomics group, based in Mason, Ohio. Cosmetics and pharmaceutical industry users may want to look for desirable transcriptome profiles, and then scan chemical libraries for compounds that push cells in that direction.

“Instead of just poking around in the dark—trying ingredients and seeing which ones work—[microarray technology] gives us a real, fundamental understanding of skin biology,” Tiesman says. For example, the team has compared old and young skin samples from women’s forearms, where sun damage is an issue, and their buttocks, where it likely is not (Br J Dermatol, 166 Suppl 2:9-15, 2012). They discovered that a lipid biosynthesis pathway, involving the production of cholesterol, was downregulated with age and sun exposure. The work led to the inclusion of hexamidine, which boosts this pathway, in the Olay Professional Pro-X products.

Method: Skin biopsies are removed from the face or other locations, via scraping with a razor or scalpel, or as a round cutout taken by a small needle or a punch device a bit like a long cookie cutter. Researchers isolate the RNA and hybridize it to fingernail-size glass chips holding millions of nucleic acid probes. Tiesman’s lab runs so many chips they use a high-throughput, 96-chip format.


Tip: “Find a good statistician, and listen to him or her from the beginning,” Tiesman says. Statisticians’ input is important in both study design and analysis. 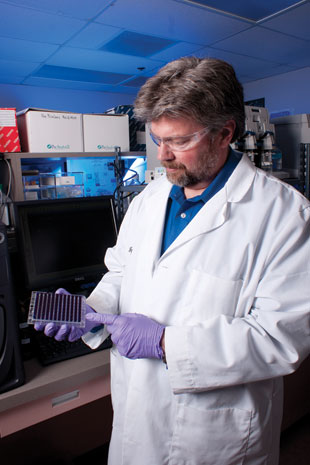 In addition to the details of gene expression, cosmetics scientists want to understand the ins and outs of cellular metabolism. Aging cells slow down metabolically, says Mary Johnson, a principal scientist at P&G. “The overall aging that we experience, a lot of it’s driven by cellular energetics,” she says. Ingredients in anti-aging creams and sera promote a healthy metabolic rate, which translates into a youthful appearance.

Johnson uses the Seahorse XF Extracellular Flux Analyzer to monitor cellular metabolism as she investigates new skin-care ingredients. Seahorse’s analyzer has replaced tedious experiments in which researchers had to isolate individual mitochondria or use special electrodes to measure oxygen consumption. The ease of the Seahorse system ignited an explosion of studies into cellular bioenergetics in the past decade, Johnson says.

Method: The XF analyzer measures two features of metabolic rate via sensors submerged in each well of a disposable 24- or 96-well microplate cartridge. It tracks the production of acidic lactate, the final step of glycolysis, as well as the uptake of oxygen as the cell respires. Together, these measures serve as a proxy for ATP production. Compounds that promote respiration and glycolysis will cause the cells to increase
their metabolism and might make skin cells
healthier and more attractive. 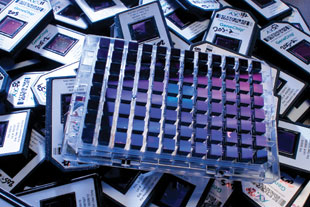 THE SCIENCE OF SKIN: A Procter & Gamble scientist (top) uses gene chip array technology (bottom) to analyze hundreds of genomes simultaneously and yield insights into the molecular pathways associated with issues of skin and hair biology.IMAGES COURTESY OF P&GPros


Tip: Make sure cells form a nice monolayer, recommends Eugenia Trushina, who uses the XF Analyzer to study mitochondrial dysfunction in disease at the Mayo Clinic in Rochester, Minnesota. Clumps or empty spots will interfere with good results.

Skin in a Dish

In vitro models of the epidermis are another common tool in the cosmetics industry. MatTek Corporation of Ashland, Massachusetts, markets several versions of skin in a dish. “This is the only human organ that can be reconstituted in vitro with not too much difficulty,” says Meenhard Herlyn, a tumor biologist who makes his own reconstructed skin cultures for studies of melanoma at the Wistar Institute in Philadelphia, Pennsylvania.

In cosmetics labs, researchers can use the cultures to test how well creams or sera penetrate the skin, by measuring the quantity of ingredients that reach the liquid media on the underside of the skin culture. Scientists can also experiment with skin-lightening agents and can check the toxicity of a new formula without using animals. A typical toxicity test, for example, involves the application of a tetrazolium dye to skin or other cell cultures. Active, healthy cells change the dye’s color, which is observed after extracting the dye from the treated tissues.

Method: For Herlyn, reconstructed human skin is a crucial tool because no other animal has skin like ours except for pigs—and those are rather large, expensive animals to work with. Herlyn makes his cultures out of infant foreskin that has been removed during circumcision. He mixes keratinocytes and melanocytes, and cultures them over a base of collagen and fibroblasts. When he exposes the culture to air, the keratinocytes move up while the melanocytes remain below, forming a realistic 3-dimensional tissue (J Vis Exp, 54:e2937, 2011). The melanocytes then pump pigment toward the surface. With a good bit of light exposure, “you can give them a real mean tan,” Herlyn says.

If you’d rather buy the skin premade, MatTek manufactures its models from dissociated infant foreskin or adult skin removed during breast reductions and tummy tucks. “It’s a thinner, smaller version of human skin,” says Ingrassia, who used the company’s models regularly when he worked for Estée Lauder.


Tip: Since thick cosmetics may be difficult to pipette onto the skin cultures, Ingrassia recommends a wide-bore, positive-displacement pipette. 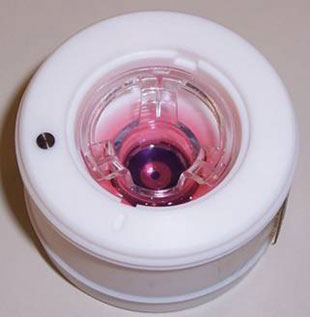 COURTESY OF IIVS, 2013Cosmetics companies want their products to be as mild and nonirritating as possible. The Cytosensor microphysiometer was the first machine of its kind to be tested and approved by US regulators to analyze eye irritation potential, replacing animal testing with assays of cultured mouse fibroblasts. The instrument is basically “a fancy pH meter,” says Warren Casey, acting director of the US National Toxicology Program’s Interagency Center for the Evaluation of Alternative Toxicological Methods in Research Triangle Park, North Carolina.

The microphysiometer doesn’t work for hydrophobic materials, which include many cosmetics. Therefore, the device is often best suited to test individual ingredients in solution, rather than complete formulations, says Hans Raabe, director of laboratory services at IIVS. The microphysiometer is only recommended to identify compounds at the extremes of the irritation scale—either highly irritating or not at all—and can’t distinguish between mild and moderate irritants.

While the Cytosensor is the only device of this
type currently approved, Casey would eventually like
to test and approve others 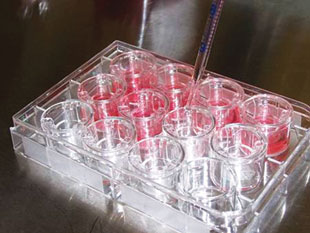 IN VITRO IRRITATION: The Cytosensor microphysiometer measures cellular pH to determine the potential of a given substance to irritate the eye. Cells are pipetted into 12-mm wells (top), which then fit into the Cytosensor chamber (bottom). When normal acid production drops by half, the treatment is considered to have a high degree of irritation. COURTESY OF IIVS, 2013that work similarly, such as the XF Analyzer.

Method: “Healthy cells will produce hydrogen ions fairly quickly; cells that are poisoned in some way will slow down the production,” Casey explains. The microphysiometer contains chambers and sensors that measure pH in the media over time. The datum of interest is the concentration of treatment at which the normal acid production drops by half, indicating a high degree of irritation.


Tip: For signaling studies, you need a large number of cells, but not too many, says John Raymond, a pharmacologist and president of the Medical College of Wisconsin in Milwaukee, who uses the Cytosensor in his studies of signal transduction in kidney cells. Raymond recommends aiming for 50,000–300,000 cells per 12-millimeter well and running the experiment within 12 hours of seeding the cultures. He found that if the cells became too crowded, the treatments he used produced only a slight change in pH, or none at all.

Cost: Molecular Devices no longer sells the device, but as of summer 2013, Cytosensor microphysiometers were still available on eBay and from The Scientist’s sister company LabX.com for anywhere from $200–$2,500. 