A HELPING HAND: To identify and cultivate bacteria whose growth depends on a soluble growth factor, Lewis plated bacteria from sand grains on agar (A) and isolated and streaked candidate pairs (B). The growth of KLE1104 (green) depends on KLE1011 (white), as its colonies get smaller the farther away they are from the helper cells (C). Used media from a helper strain culture is sufficient to support KLE1104 growth, indicating a growth factor is all that’s missing. A. D'ONOFRIO ET AL., CHEMISTRY & BIOLOGY, 17:254-64, 2010If you take a sample of seawater and plate it on a typical petri dish, colonies of bacteria will flourish. Each of those colonies springs from a single cell; counting those colonies provides an estimate of the number and variety of organisms in the water sample. But count the cells in that same sample directly, and you’ll find you’ve only scratched the surface....

That difference is called “The Great Plate Count Anomaly,” and it is vast. By some estimates, direct cultivation captures just 0.01 percent to 1 percent of the bacterial diversity in biological samples. The rest represents a missed opportunity of sorts—organisms whose ecologic functions and metabolic potentials researchers could glimpse, perhaps by sequencing their DNA, but never directly study. This dark matter of the microbial world could be an untapped gold mine of antibiotics, biofuels, bioremediators, and more. (See “Lost Colonies,” The Scientist, October 2015.)

In the world of microbiology, such organisms are designated uncultivable. But that label isn’t quite right, says J. Cameron Thrash, a microbiologist at the Louisiana State University in Baton Rouge; after all, these organisms grow in nature, some exceptionally successfully. “I think [the term] is a failure of imagination and maybe a failure of understanding the organisms well enough,” Thrash says. “I don’t subscribe to the idea that anything is unculturable, though certainly there are things that are uncultivated.”

Increasingly, researchers are devising methods to cope with the problem. The Scientist spoke with four of them about the strategies they use to cultivate the uncultivable. This is what they said.

IN SEARCH OF GROWTH FACTORS

SOLUTION: In attempting to culture the microbes that live on sand, Lewis and his team noticed something peculiar: when they performed serial dilutions and plated the samples onto petri dishes, they got proportionately larger counts in relatively undiluted samples than they saw at higher dilutions. In other words, organisms were growing in more-concentrated samples that would not grow when the cells were more spread out.

The team reasoned that some cells were secreting growth factors into the medium that other cells then scavenged. To find those factors, the group plated concentrated cell mixtures and selected pairs of cell types in which a small colony was found in close proximity to a large one, like a moon orbiting a planet. “The bigger [colony] is probably cultivable, so it started growing earlier,” Lewis explains. “The unculturable organism is not going to make a bigger colony than the one that helps it.”

The researchers then cross-streaked both organisms on a fresh plate in an X pattern, looking for evidence that growth of the smaller colony depended upon proximity to the larger. Frequently, it did. According to Lewis, of 100 tested pairs, about 10 percent met this criterion. “It’s not a very rare event.”

That approach is sufficient to grow a supposedly uncultivable organism, albeit not in isolation. So the researchers set out to determine the needed growth factor. Using E. coli as a substitute “helper” strain, they systematically tested mutations in genes involved in the biosynthesis of secreted molecules, zeroing in on enterobactin as the missing ingredient (Chem Biol, 17:254-64, 2010).

Enterobactin is a siderophore, a chelator molecule that scavenges iron from the environment. As the team discovered, many uncultivable bacteria will grow if siderophores (or soluble iron) are included in the growth media. Among those is Verrucomicrobia, a group of bacteria that live in the ocean and also in the human gut, and that had been known largely from their 16S rRNA gene signatures. “We would not have found [this organism] if not for this approach,” Lewis says.

SIDEROPHORES “R” US: According to Lewis, researchers can easily emulate his approach to discover novel growth factors and cultivate uncultivable microbes. “That’s a fairly rapid screen that one can do; you can process hundreds of pairs that way.” In the meantime, researchers can purchase a variety of siderophores from Germany-based EMC Microcollections (microcollections.de).

DEVILISHLY DIFFICULT: Bacteria of the clade SAR11, shown here, are among the most ubiquitous organisms in the Earth’s oceans, yet they are notoriously difficult to cultivate in the lab.MICHAEL RAPPE, SOEST/UHRESEARCHER: J. Cameron Thrash, Assistant Professor, Department of Biological Sciences, Louisiana State University (LSU)

SOLUTION: Before starting at LSU, Thrash was a postdoctoral researcher with microbiologist Stephen Giovannoni at Oregon State University. In 2002, Giovannoni and his team described a strategy called high-throughput cultivation and used it to grow one of the most abundant, yet persistently uncultivable, organisms in the oceans: bacteria of the SAR11 clade (Nature, 418:630-33, 2002).

According to Thrash, the technique involves “dilution to extinction”—diluting a microbial sample into sterilized seawater such that each well of a 96-well plate contains, on average, a single cell. Then, after a few weeks of culture in nutrient-poor media, the team measures growth by looking for a boost in cell numbers.

The point, Thrash explains, is twofold. First, seawater is nutrient-poor, and the microbes that live there seem to be adapted to that diet. Give them too much food, and they either won’t grow, or they’ll die. Plus, these cells are very slow-growing, so they must be isolated from other organisms that might outcompete them. The goal is to give the organisms as many opportunities as possible to grow, and then watch to see what happens. “We’re essentially doing a technique where you try to isolate the organism in advance,” he explains. “Then we just have to wait and see if that one cell in that well grows up.”

The technique’s reliance on sterilized seawater has been problematic, however, because precise nutrient conditions can vary widely, Thrash says. Cells may grow on water collected at one place and time but not another, and keeping large volumes of seawater on hand for large-scale experiments is not practical. So, more recently, his team developed a suite of “artificial seawater” formulations with precisely defined but adjustable salinity, pH, and organic carbon to better approximate collection sites. Diluting his samples in these solutions, he can capture between 2 percent and 7 percent of the organisms they contain, including members of SAR11.

GROW WITH THE FLOW: According to Thrash, seawater microbes don’t grow like E. coli—a dense culture of E. coli might reach 109–1012 cells/mL; seawater bacteria average 105–107/mL—and the cells are also smaller, as tiny as 0.2 μm across. Long story short, a relatively populous culture of SAR11 looks, he says, “like clear water.” So how to measure growth? Flow cytometry. The team mixes cells with a nonspecific DNA dye, then counts the cells as they flow past a laser. “We’re capable of measuring as low as 104 cells/mL,” says Thrash.

SOLUTION: C. burnetii is the microbe responsible for the zoonotic disease Q fever. It grows inside the cells of its host, scavenging nutrients from the intracellular environment. The challenge, then, is to create a so-called “axenic” or host-cell-free culture that nonetheless replicates the conditions inside a cell. But there are an awful lot of chemicals inside the typical cell, and not all of them support growth, Omsland says. “You have to go after the problem in a very systematic manner.”

The first step, he says, was to identify a buffer that would support Coxiella metabolism for extended periods. Previous work had shown that Coxiella is a moderate acidophile, metabolizing optimally at about pH 4.5. By supplementing a moderately acidic citrate buffer with critical ions and nutrients, the team achieved robust protein synthesis, but not division. The question was: Why?

Using gene-expression microarrays, the team determined that ribosomal genes were underexpressed, suggesting the cells simply weren’t producing sufficient protein to divide. According to Omsland, then a postdoctoral fellow with Robert Heinzen at NIAID’s Rocky Mountain Laboratories in Hamilton, Montana, that’s where knowledge of the Coxiella genome proved invaluable. Intracellular pathogens tend to evolve to fill their needs efficiently by coopting resources from the host environment. In this case, because the organism could swipe amino acids from its surroundings, C. burnetii dropped its amino acid biosynthetic genes in favor of amino acid transporters. Addition of exogenous amino acids and peptides to the axenic media increased protein production some 13-fold (PNAS, 106:4430-34, 2009). 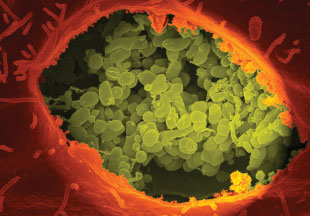 INTRACELLULAR DENIZEN: This false-color scanning electron micrograph shows the intracellular pathogen Coxiella burnetii (green) growing within a primate kidney cell (orange). NATIONAL INSTITUTE OF ALLERGY AND INFECTIOUS DISEASEBut that still wasn’t sufficient to achieve cell division. So the team once again turned to the genome, which also encodes certain oxygen-responsive cytochromes. The presence of a terminal oxidase with a particularly high affinity for oxygen suggested the cells might thrive under reduced-oxygen conditions. This makes sense, Omsland says: although breathable air contains 20 percent oxygen, the oxygen availability in deep tissue, where Coxiella grows, is only about 2 percent to 4 percent. “So, we tested the ability of Coxiella to respire under low oxygen.”

That, Omsland says, did the trick. Although the cells would not grow in standard 20 percent oxygen, they would divide at 5 percent oxygen or lower, expanding about three orders of magnitude over six days. “If you can simulate the natural conditions closely enough, these organisms will eventually replicate,” he concludes.

STEP BY STEP: Cultivating unculturable microbes is all about replicating growth conditions. But in this case, there was no one “silver bullet,” Omsland says. “You have to consider a number of different variables to optimize the system.” His advice for others looking to replicate his strategy: plan carefully and systematically, and start slow. “These projects are one step forward and two steps back.”

SOLUTION: Although the vast majority of microbes cannot be directly cultivated, there exists an enormous wealth of knowledge about strains that can be. Oberhardt, working with Uri Gophna, Raphy Zarecki, and Eytan Ruppin at Tel Aviv University in Israel, figured those data might allow them to predict promising media formulations for uncultivable varieties.

The Leibniz Institute DSMZ houses one of the largest bacterial culture collections in the world, as well as detailed records of the media required to grow them. When Oberhardt and his team realized what a data trove that represented, they got excited about the possibilities, he says. “People have been relying on intuition and trial and error to develop culture media for the last 100 years. By using this resource, we saw an opportunity to do better.”

They combed through the DSMZ database, logging some 3,335 media variants, 18,049 strains, and 20,824 media-strain pairings to create the known-media database, KOMODO. Then, using the same basic algorithms Amazon uses to recommend books and Facebook uses to suggest friends, the team developed a web-based tool (GROWREC) in which users enter either a ribosomal DNA sequence or a taxonomic identifier to predict media on which those organisms might grow (Nat Commun, 6:8493, 2015). The tool relies on phylogenetic distances and an algorithm called collaborative filtering, which predicts media for one organism based on the media on which similar organisms are known to thrive.

According to Oberhardt, some 90 percent of predictions turned out to be accurate in their tests. But, he cautions, those tests used only organisms already in the DSMZ collection; it may be considerably more challenging to identify media for yet-uncultured microbes. But the system does allow users to predict optimal media “richness,” a term that describes the amount of usable organic carbon, a key variable for microbial cultivation. “If you have a new organism, our system can predict the richness of the media that it probably prefers,” he says. And, as the database fills out, it may be possible to predict other components as well, including salinity, inorganic ions, and more—features that may help in formulating new media for previously uncultivable organisms.

LOOK IT UP: The KOMODO database and GROWREC algorithm are publicly available at komodo.modelseed.org.