PAINTING BY PEPTIDE: Multiplex mass-spectrometry image of a section through a rat kidney taken at 150 µm spatial resolution. Each color represents an individual peptide or protein of specific mass-to-charge (m/z) ratio. JUNHAI YANG AND RICHARD CAPRIOLI, MASS SPECTROMETRY RESEARCH CENTER, VANDERBILT UNIVERSITYLast year, when Albert Heck ran a commercially purchased sample of chicken ovalbumin through his mass spectrometer, he knew it would turn out to be more heterogeneous than researchers typically assumed. But his discovery that the commonly used molecular weight marker exists as at least 59 distinct proteoforms, each with a unique set of posttranslational modifications, was eye-opening. “We were expecting 10–15 proteoforms,” says Heck, the head of biomolecular mass spectrometry and proteomics at Utrecht University. “We were surprised.”

Heck’s finding underscores the growing need for and interest in top-down proteomics. Researchers have made huge strides cataloging the thousands of proteins that make cells tick, relying...

“Molecular analysis should be done top-down,” says Neil Kelleher, professor of molecular biosciences and chemistry at Northwestern University, who has been pioneering top-down proteomics for more than 20 years. Kelleher estimates that the 20,300 or so genes of the human genome are differentially transcribed and posttranslationally modified into some 1 billion proteoforms. And for him, the only way to understand, marvel at, and properly begin to study the detail within this complexity is by interrogating intact proteins using top-down methodologies.

Kelleher’s call for a systematic top-down human proteome project has yet to go mainstream, but academic and industry researchers alike are increasingly using this approach to characterize their pet proteins, develop therapeutic monoclonal antibodies, dissect protein complexes, and hunt for biomarkers. The technique is also revolutionizing the identification of pathogens, helping doctors to quickly select the right drug for an infection. It can even be used to discriminate antibiotic-resistant strains of bacteria from their susceptible relatives.

“Every year that goes by, top-down proteomics becomes a little bit more adopted and makes a little more sense to a few more people,” says Kelleher.

New mass spectrometers are partly driving this uptake. Multimillion-dollar, bulky, magnet-based mass spectrometers previously provided high financial and technical barriers to entry, but cheaper, smaller, and more user-friendly instruments—such as Orbitraps, quadrupole Time of Flight (QTOF), and matrix-assisted laser desorption/ionization (MALDI-TOF) machines—are slowly bringing top-down techniques to the masses. “I feel that there has yet to be an instrument that has solely been designed with top-down analyses in mind from the very start,” says Kelleher. “But the challenges are falling year by year.” 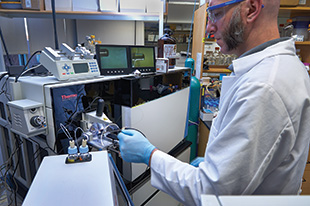 Orbitraps work by capturing ionized molecules—intact protein ions, in the case of top-down proteomics—in an orbit around a central spindle. As these ions spin, they also travel laterally back and forth along the spindle, generating an electrical current that the mass spectrometer reads out as a mass/charge ratio (m/z), the main measure of mass spectrometry. With m/z readings becoming ever more precise, they are starting to serve as protein barcodes. By comparing an m/z reading against reference libraries, researchers can figure out which proteins they have on hand and can link minute variations around expected averages to specific posttranslational modifications, such as phosphorylation and glycosylation. A forte of the Orbitraps, moreover, is that they pack a huge resolving power with which to pick apart extremely close m/z peaks.

The Q Exactive, Thermo Fisher’s roughly US$500,000 entry-level Orbitrap, is “the closest thing we have to an inexpensive tool for top-down proteomics,” says Kelleher, who has collaborated with Thermo Fisher. These benchtop devices are relatively easy to install and reliable, adds Julian Whitelegge, who leads the proteomics division of the Pasarow Mass Spectrometry Laboratory at the University of California, Los Angeles.

Orbitraps, like other mass spectrometers, can also be paired with fragmentation tools to slice and dice intact proteins into a few pieces within the mass spectrometer. “The beauty of the mass spectrometer is that you can select a particular ion in an ion-isolation experiment, throw out everything you don’t want, and then you can fragment that ion and measure the mass of all the different fragments that come from the intact protein,” explains Whitelegge. (In bottom-up proteomics, by contrast, researchers cut their proteins up into fragments before introducing them into the mass spectrometer.) In the case of the upgraded Orbitraps, this means researchers can pinpoint posttranslational modifications down to specific residues by comparing the m/z of the different fragments. Thermo Fisher’s Orbitrap Fusion and Orbitrap Elite instruments offer this type of power, but can cost as much as twice the price of the Q Exactive.

Because mass spectrometers sort and detect ions on the basis of their electrical charge, proteomicists have traditionally obtained data by turning their proteins into highly charged ions. But some proteins can only be studied under minimally ionized “native” conditions that have pushed the limits of mass spectrometers. Orbitraps are starting to push back, inching the m/z range they can handle ever higher (the lower the charge, the higher the m/z). Andreas Huhmer, proteomics marketing director at Thermo Fisher, boasts that some of his firm’s Orbitraps can now handle ions up to 20,000 m/z, which covers most human proteins and protein complexes.

“We used to get a big hump on the mass spectrometer when you tried to do native mass spectrometry. The signals would merge together to the point where we could not deconvolute them,” he explains. “The spectrum that we can look at is now much easier to interpret.”

But, cautions Heck, “although Orbitraps can generate extremely nice data, their software packages to handle data from intact proteins and protein complexes are still way behind.”

The latest generation of QTOF mass spectrometers, manufactured by Bruker, Agilent, Waters, and others, are also opening doors, especially for intact protein and complex analyses.

Because light ions move faster than heavy ions as they travel through a vacuum, QTOFs take mass measurements by comparing how long it takes speeding ions to strike a detector. One of the benefits of this approach is that the instruments can handle ions with higher m/z than the latest Orbitraps, as high as 40,000 m/z in the case of Bruker’s recently released maXis HD. The maXis HD costs on the order of $500,000.

“This machine can determine with high precision, to an accuracy of one to two electron masses, the molecular weight of the antibody’s light chain, its Fc domain, and its Fd domain,” says Detlev Suckau, head of Pharma and Biopharma Solutions R&D at Bruker. As a result, he adds, it is ideal for biopharmaceutical analyses: dissecting antibody therapies, for example, or confirming that a manufacturing scale-up process is producing exactly the intended antibodies.

QTOFs have an extra edge when it comes to studying large, native protein complexes, such as ribosomes, or even intact viruses. In addition to being able to handle the higher m/zs that these complexes generate, QTOFs tend to be extremely good at keeping ions intact as they are introduced into the machine. As a result, some researchers say, they are the instrument of choice for studying behemoth biological nanomachines—unraveling, for example, which and how many subunits make up the whole. “The biggest protein complex we’ve been able to mass analyze was an intact virus that was larger than 22,000 kDa, and that was with a QTOF,” says Heck, who has collaborated with Agilent. (The average human protein falls roughly in the realm of 40–50 kDa, some 500 times smaller.)

QTOFs can also weigh ions extremely quickly. In QTOFs, ions travel only a few meters, in a matter of nanoseconds, to reach their detectors. In Orbitraps, by contrast, they spin around the central spindle for a total distance of up to 10,000 meters, taking up to one second to generate a signal. Researchers who are running samples from a liquid chromatography column directly into a mass spectrometer with only 30 seconds or so to catch their protein of interest as it elutes may benefit from being able to take measurement with QTOFs.

On the downside, QTOFs have a lower resolving power than the Orbitraps, which means they are generally less adept at picking close ion peaks apart from one another. “The QTOFs are getting better,” says Whitelegge. “But you are still going to be limited in the upper molecular weight of the protein that you can resolve.” 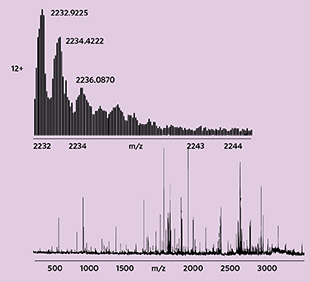 ZOOMING IN: In top-down mass spectrometry, the atomic diversity of an intact protein (top) is resolved so that the number of charges can be counted. In this spectrograph, the membrane protein bacteriorhodopsin (m = 26,783 Da) has a charge of 12+. The ion at mass/charge (m/z) 2233 is isolated and further dissociated in the mass spectrometer to generate a variety of protein fragments (bottom). The high mass accuracy of the intact protein precursor and its product ions allow precise assignment of the complete primary structure. JULIAN WHITELEGGE, UCLA; THE SCIENTIST STAFFIntact protein analysis with MALDI-TOF spectrometers is also on the rise, especially for translational and microbial researchers.

In MALDI-TOF, researchers blast biological samples with a laser to introduce the charged protein ion into the mass spectrometer, where the ions are measured with the standard TOF approach. A key advantage of this strategy is the ability to work from tissue slices, acquiring information about the spatial distribution of intact proteins. By comparing the ions generated directly from malignant tissue to the ions from its nonmalignant surroundings, researchers can explore how hundreds of intact proteins and their proteoforms are differentially distributed in disease.

“It’s a very, very active area,” says Richard Caprioli, director of the Mass Spectrometry Research Center at Vanderbilt University School of Medicine and a forefather of the approach. Researchers primarily use the localized proteomics data to identify diagnostic and prognostic biomarkers. But relatively over- or underexpressed proteins can also provide insight into the molecular underpinnings of disease, and potentially even point the way to new drug targets. “There is a lot of activity in this area of research,” he says. Because much of this work is being done with drug companies developing proprietary therapies, he adds, it is generally not published.

Bruker, Agilent, Waters, and others sell MALDI-TOF devices with some tissue-imaging capabilities. But if you want to get high performance and high-throughput capabilities, says Caprioli, you have to modify the currently available instrumentation with your own add-ons. “In one case, we gutted and rebuilt an instrument completely,” he says. “We need a robotics front end, a mass spectrometer, and bioinformatics software all in one package. Once that happens, this approach will become common in biology, histology, and pathology labs,” predicts Caprioli.

Vendors have taken this message to heart in another application of MALDI-TOF for microbiologists and clinicians who are turning to mass spectrometry to identify bacterial and fungal pathogens. In hospitals, for example, researchers use MALDI-TOF to study pathogenic samples, comparing intact-protein chromatographs against known pathogenic protein profiles to figure out which organisms are causing infections. Doctors have embraced the approach across Europe, and last year the US Food and Drug Administration approved the first two mass spectrometry systems—bioMérieux’s VITEK MS and Bruker’s MALDI Biotyper—for clinical diagnosis of bacterial and fungal pathogens. 