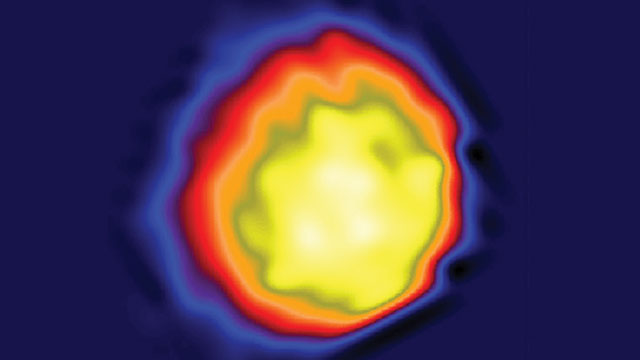 NAKED VIRUS: The first high-contrast image of a single herpesvirus ever taken with a coherent X-ray synchrotron. The virus, with its capsid, measures about 100 nm in diameter.COURTESY OF JIANWEI MIAO

It was just over a century ago that William Lawrence Bragg and his father, William Henry Bragg, kick-started the science of X-ray crystallography in a talk at the Cambridge Philosophical Society on November 11, 1912. Since then, thousands upon thousands of structures have been solved, from table salt and diamond to RNA polymerase and the ribosome.

Back in the Braggs’ time, crystals were analyzed using laboratory X-ray tubes, which are relatively weak sources of continuous, noncoherent light—that is, light that travels in all directions, like lamplight. In the 1970s, researchers started using synchrotron particle accelerators, which can shoot partially focused (i.e., relatively coherent), highly intense X-ray radiation at a crystal. According to Jianwei Miao, a professor of...

Since 2009, a select number of researchers have had another option. The Linac [linear accelerator] Coherent Light Source (LCLS) at Stanford University and the SACLA (SPring-8 Angstrom Compact Free Electron Laser) in Japan are the world’s first “hard” X-ray free-electron lasers (XFELs), capable of producing light some billion times more brilliant than that from a synchrotron, and colliding it with tiny crystals in pulses just femtoseconds long. That’s like taking all the sunlight that hits the Earth and focusing it into one square millimeter, explains Janos Hajdu, a professor of molecular biophysics at Uppsala University in Sweden. Under such intense irradiation, the sample is destroyed almost instantaneously—but not before it diffracts, producing a weak but detectable signal.

As X-ray intensity increased, the crystal size needed to solve a structure has decreased, from about 1 mm or more for an X-ray tube, to 100–200 μm for a synchrotron, to as small as 200 nm for an X-ray laser, says Sébastien Boutet, a staff scientist at LCLS. That’s a boon for structural biologists, because growing large crystals has been a perennial source of torment. That synchrotrons and XFELs can use smaller crystals, which are easier and faster to grow, has improved matters—but the ultimate goal is to get rid of crystals altogether: to image individual molecules, molecular complexes, or viruses. That would represent a huge advance for scientists; not all proteins crystallize, and those that do sometimes adopt conformations that are not representative of their native forms in vivo. (See “Smashing Crystals,” The Scientist, July 2011.)

Researchers have not reached that crystal-free point yet, at least not with individual proteins, but they have made significant leaps. Here, The Scientist looks at three recent advances.

Problem: Crystallography typically relies on the signal amplification that comes from bouncing X-rays off trillions upon trillions of identical molecules in a crystal matrix. No such amplification can occur with a single virus particle, meaning Miao needed an exceptionally bright X-ray source.

Solution: In 1999, as a graduate student at Stony Brook University, Miao demonstrated for the first time that a noncrystalline material—a collection of gold dots, each approximately 100 nm in diameter and 80 nm thick, arranged to form the first six letters of the alphabet—could yield an interpretable diffraction pattern and image via an analysis method called “oversampling” (Nature, 400:342-44, 1999). Nine years later, now the head of his own lab, he attempted to image an individual virus.

At that time, the world’s brightest X-ray source was the SPring-8 synchrotron. So, Miao and his team headed to Japan, where they immobilized individual, uncrystallized murine herpesvirus-68 virions on an X-ray–transparent silicon nitride membrane, placed it in the synchrotron’s beam path, and collected diffraction data. (Phys Rev Lett, 101:158101, 2008)

“It took us a while,” Miao concedes. For one thing, the virus measures only 150–200 nm in diameter, whereas the synchrotron beam is about as wide as the thinnest human hair, perhaps 20 μm. Getting the two to line up in complete darkness inside a large vacuum chamber took some doing, he says. In the end, Miao’s team first used a “high-resolution optical microscope” to locate individual virus particles on the membrane. They then inserted the membrane into the chamber and scanned it relative to the X-ray beam while watching for diffraction signals. After 10 days of around-the-clock effort, they finally succeeded.

The resulting diffraction pattern yielded a low-resolution structure of a single herpesvirus virion, the first time such an image had ever been obtained. But at 22-nm, or 220-Å, resolution, the virus does not look like a classical virus so much as a niblet of corn, or perhaps an asteroid. (See image above.) “We can see the capsid and the membrane, but not much detail,” Miao says.

Tip: Put Your Macromolecule on a Membrane
Of the few structures solved to date on XFELs, most have used a configuration in which a stream of aerosolized particles is injected perpendicular to the laser. But that process leads to an abundance of empty data sets—i.e., detector snapshots in which no X-ray–particle collision occurred. Miao took a different approach, imaging his virus by sticking it onto 30 nm–thick, X-ray–transparent silicon nitride membrane from U.K.-based Silson. He has now repeated his synchrotron experiments on an XFEL. With a synchrotron, powerful as it is, he could hit the same spot over and over again to collect a usable data set. In contrast, the XFEL beam drills a micron-size hole with each impact, so each point can only be sampled once. Miao found that about one in every 10 laser strikes produced a diffraction pattern from the silicon nitride membranes, compared to perhaps one in 10,000 with direct injection of particles. 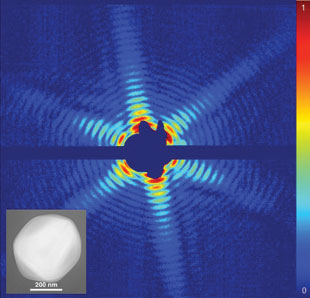 HIPPIE VIRUS: Diffraction pattern from a single mimivirus particle captured with a femtosecond-long and extremely intense X-ray pulse.COURTESY OF JANOS HAJDUProblem: XFELs hold the promise of imaging individual viruses and even individual proteins—in theory. The question is, does the technique work as advertised?

Solution: Hajdu and his team published back-to-back papers in Nature in 2011 introducing a new technique called serial femtosecond crystallography (SFX). In the first paper, they report the low-resolution (8.5 Å) structure of the membrane protein complex photosystem I generated from some 3 million diffraction patterns collected from “nanocrystals” measuring 0.2–2 μm (Nature, 470:73-77, 2011). In the second, they record diffraction patterns from individual mimivirus particles, which measure about 750 nm in diameter (Nature, 470:78-81, 2011).

Mimivirus is an amoeba pathogen and one of the largest known viruses. The particle is too big for detailed nuclear magnetic resonance (NMR) or cryoelectron microscopy, Hajdu says, and its “hairy outer surface” precludes crystallization. “It really looks like a hippie all over.” (See “ ‘Alive’ and In Focus,” The Scientist, October 2012.)

Hajdu and his team went to the LCLS, where they directed a beam of aerosolized noncrystalline mimivirus particles into the X-ray laser and recorded what happened. The laser fired an intense beam of 6.9-Å X-rays in 70-femtosecond bursts, 30 times per second, requiring a specialized detector that can capture and read out those data at the same rate.

But none of the components needed to do the experiment were available off-the-shelf, Hajdu says. “We had to dream it up and make it.” That included the sample injector, which uses aerodynamic lenses to focus the virion spray into a particle beam just a few microns across. Then they had to work out conditions such that the spray collided with the X-ray beam, barely 10 microns across. Finally, they needed a pair of fast detectors capable of tracking individual diffracted photons at the repetition rate of the laser while ignoring the vast number of undiffracted ones, which arrived at the rate of 100 billion undiffracted photons for every diffracted one. Their solution: put a hole in the center of the CCD camera sensor that allowed the undiffracted beam to pass harmlessly through, and create analytical software they called Hawk that could handle the resulting terabytes of data.

Tip: Use a standard file format.
Although there are only a few places in the world where researchers can smash crystals with femtosecond X-ray pulses, there is no universal file format in which the collected data can be stored, making it difficult to compare data between labs and collaborate. In 2011 the Coherent X-ray Imaging Data Bank (CXIDB; cxidb.org) was established as an “open repository” for X-ray laser data. Providing open access and a standard file format—as well as free tools to convert files to that format—CXIDB allows researchers to organize and share their data, as well as the burden of data analysis, “thereby effectively speeding the rate of scientific discovery,” Hajdu says. 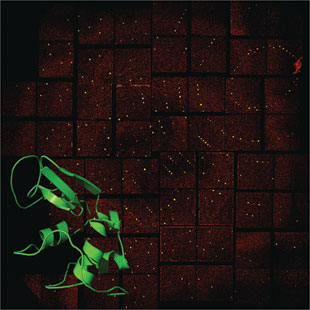 LYSOZYME CRYSTALS: The diffraction pattern shown here is from a single X-ray LCLS pulse hitting a lysozyme crystal. Thousands of such images were combined to obtain the structure of the lysozyme molecule shown in green at the bottom left.COURTESY OF SEBASTIEN BOUTETSolution: Diffraction data quality is limited by wavelength, such that the resolution of the image can never exceed half the wavelength of the X-ray beam. To get better resolution, Boutet and colleagues used the newly commissioned LCLS Coherent X-ray Imaging (CXI) instrument on a separate LCLS beamline, which produces 1.32-Å X-rays in 5- or 40-femtosecond bursts.

“The standard [X-ray crystallography] software does not work, you need to tweak it a bit,” explains Boutet. That’s because standard crystallography uses individual crystals that produce sharp “complete Bragg peaks” by rotating the crystal during measurement. SFX uses thousands of smaller crystals that are randomly oriented, meaning all of those individual data sets must be combed through and aligned. CrystFEL does the heavy lifting of sifting through and integrating those data sets to produce a single structure.

Tip: Getting beam time
With only two hard X-ray lasers available worldwide, beam time is hard to come by, says Boutet. At LCLS, calls for proposals are issued twice a year and are open to the entire scientific community. Typically 150 proposals are received, of which maybe 30 percent are accepted based on scientific merit and availability of beam time. Applications with the best shot at success are ones with “a specific goal and aim for the experiment,” said Boutet. “We are looking for things that will have broad impact in society,” as well as those that propose to research “physiological processes that are not currently well understood.”