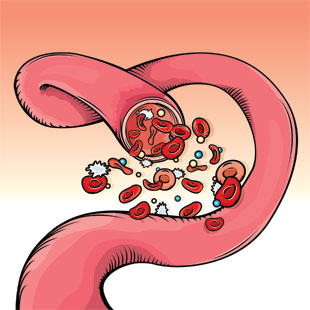 © ABOMB INDUSTRIES DESIGN/ISTOCKPHOTO.COMIn 1869, pathologist Thomas Ashworth noticed some unusual cells in the blood of a patient who had died of cancer. The cells didn’t look like normal blood cells; instead, they were similar in appearance to those found in the numerous solid tumors present all over the patient’s body. Ashworth speculated that perhaps the cells were derived from the existing tumors, and could help explain the distribution of the patient’s multiple lesions (Australian Med J, 14:146-49, 1869).

Scientists now believe that these so-called circulating tumor cells (CTCs) play a key role in metastasis. Because CTCs can be obtained through routine blood draws—a procedure that is much easier and less invasive than a tumor biopsy, making it amenable to repetition—many scientists are hopeful that the cells could be used to detect cancer and metastases at an early stage. CTCs could also help doctors plot the...

However, CTCs are extremely rare and challenging to isolate. Most current estimates suggest that a patient with metastatic cancer has only about one CTC for every billion or so normal blood cells. “It’s kind of like, in this whole world of seven billion people, trying to look for five or ten people,” says Chwee Teck Lim, a biomedical engineer at the National University of Singapore who studies CTCs.

The most commonly used strategy for isolating CTCs involves pulling the cells out of blood using an antibody that binds to the protein EpCAM (epithelial cell adhesion molecule), which is often present on the surface of malignant epithelial cells but not of blood cells. For example, a commercially available product known as CellSearch, which is manufactured by Janssen Diagnostics (a Johnson and Johnson company) and is currently the only CTC test that is approved by the US Food and Drug Administration, isolates CTCs from blood using magnetic particles coated with anti-EpCAM antibodies. The CellSearch assay determines the number of CTCs present in a 7.5 mL sample of blood, which has been shown to correlate negatively with survival in patients with metastatic breast, colorectal, or prostate cancer (J Oncol, 2010:617421, 2010).

One problem with antibody-based approaches, says Jaap den Toonder, a mechanical engineer at Eindhoven University of Technology in the Netherlands who has developed microfluidic tools for studying CTCs, is that the proteins present on the surface of tumor cells can vary tremendously depending on the patient, the type of cancer, and the stage of the tumor. Furthermore, capturing and detecting the cells is only the first step—many researchers would like to culture the CTCs and/or characterize them further. Unfortunately, den Toonder says, the majority of CTCs are no longer viable once they have been captured using antibody-based approaches, and they are stuck to nanoparticles or other surfaces, thereby limiting the types of molecular and cellular assays researchers can perform on them.

Here, The Scientist profiles some of the recently devised strategies for isolating and characterizing these rare cells.

SPIRAL CHIP: A microfluidic biochip called ClearCell FX can isolate viable circulating tumor cells (CTCs). The blood sample and a saline buffer are pumped into separate inlets. As cells move through the channel, inertial and centrifugal forces ultimately cause the smaller red and white blood cells to flow along the channel’s outer wall and the larger CTCs to flow along the inner wall. The channel splits into two (bottom center), where most blood cells flow toward a waste chamber (thicker pink channel, bottom left) and the CTCs flow toward a collection container (right).© CLEARBRIDGE BIOMEDICS PTE LTDResearchers: Chwee Teck Lim, Professor, Department of Biomedical Engineering and Department of Mechanical Engineering, National University of Singapore; Jongyoon Han, Professor, Department of Electrical Engineering and Computer Science and Department of Biological Engineering, MIT

Technology: Lim, Han, and colleagues created a microfluidic chip with a spiral channel that isolates CTCs from blood based on their size, roughly 10–20 μm in diameter, which tends to be larger than that of blood cells, most of which are approximately 7–12 μm in diameter. They pump a sample of blood into the device, and as the cells flow through the channel at high speeds, the interplay between the inertial and centrifugal forces that arise causes smaller cells, including red and most white blood cells, to flow along the outer wall of the spiral channel, while larger cells, including the CTCs and larger white blood cells, flow along the inner wall. At the outlet of the chip, the channel bifurcates, and the cells travelling along the outer wall flow into a waste container, while those near the inner wall pass into a collection chamber for further analysis.

Application: The team has used its microfluidic chip to isolate CTCs from the blood of patients with metastatic lung or breast cancer (Sci Rep, 3:1259, 2013; Lab Chip, 14:128-137, 2014). The group detected CTCs in all of the patient samples processed, and successfully maintained some of the isolated CTCs in culture.

Bonus: The chip can be modified to isolate other types of rare cells besides CTCs, says Bhagat. For example, he says that his company is working on a modified version of the chip that can isolate fetal cells from maternal blood. 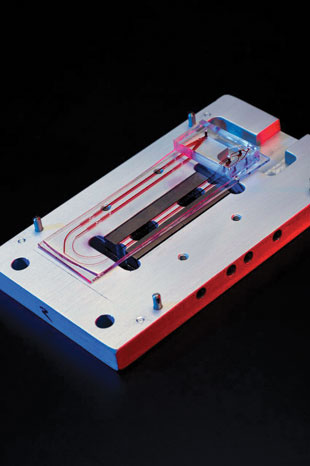 THREE-STAGE ISOLATION: CTC-iChip is another microfluidic device that isolates rare circulating tumor cells (CTCs) from blood. A sample of whole blood is first mixed with antibody-labeled magnetic beads to tag the white blood cells (WBCs), and the mixture is pumped into a debulking array (not shown) that removes red blood cells and platelets. The remaining cells then flow into an inlet (top left) on the focusing channel. After passing through a curved region (lower left) that causes the cells to form a single file, the cells enter a magnetic region (black rectangles) that causes the tagged WBCs and the untagged CTCs to flow toward separate outlets at the end of the channel (top right).PHOTO BY N. MURAT KARABACAK, RESEARCH FELLOW, MASSACHUSETTS GENERAL HOSPITAL, HARVARD MEDICAL SCHOOL; OZKUMUR, ET AL, SCIENCE TRANSLATIONAL MEDICINE, 2013 AND KARABACAK, ET AL., NATURE PROTOCOLS, 2014Researcher: Mehmet Toner, Professor of Surgery and Biomedical Engineering, Harvard Medical School

Technology: Toner’s team developed a microfluidic chip named CTC-iChip that isolates CTCs indirectly by depleting a blood sample of its other components. The researchers first mix a blood sample with antibody-coated magnetic microbeads that bind a protein on the surface of white blood cells. Then, they pump the sample into their microfluidic device, which has three chambers: the first contains a series of microposts that cause the smallest components of a blood sample, including red blood cells and platelets, to flow toward a waste outlet; in the second compartment, the remaining cells line up single-file and enter the third compartment of the device, where a magnet deflects the microbead-bound white blood cells towards one collection chamber; the remaining cells—including CTCs—flow into a third collection chamber.

Tip: Because the number of CTCs present in the blood of a cancer patient can vary depending on the treatments a patient has received, Toner recommends that users analyze well-annotated blood samples that provide information about the patient’s cancer and treatment. “I think the source is very important,” he says. “You need to know where your blood is coming from, because if you don’t find cells, maybe you shouldn’t have, because maybe the patient is responding extremely well to the treatment.” 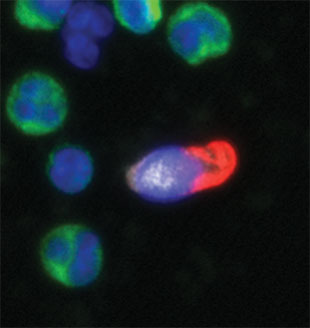 IMAGING CIRCULATING CANCER: After removal of red cells from a blood sample, the remaining cells are smeared on specialized microscope slides and stained with fluorescent markers for nuclei (blue), the white blood cell protein CD45 (green), the epithelial protein cytokeratin (red), and a biomarker of interest (white; in this case, androgen receptor, a protein frequently overexpressed in cancer cells). A computer algorithm identifies CTCs based on their size and shape, the absence of CD45, and the presence or absence of cytokeratin.COURTESY OF THE KUHN LAB, HTTP://4DB.USResearcher: Peter Kuhn, Associate Professor, Department of Cell and Molecular Biology, The Scripps Research Institute, La Jolla, CA

Technology: Kuhn’s team developed an automated fluorescence microscopy-based platform for picking out CTCs in a sample of blood on a microscope slide. Kuhn likens the approach—which has since been licensed to Epic Sciences, a California-based biotech company he cofounded—to the Where’s Waldo? series of children’s books in which readers attempt to locate a unique character named Waldo in a cartoon scene crowded with other characters. The researchers lyse and discard the red blood cells in a 7.5 mL blood sample, then spread the remaining nucleated cells on specialized microscope slides, each of which accommodates the equivalent of roughly 0.5 mL of whole blood. They then stain the cells with up to four different fluorescent markers: a dye that binds nucleic acid to identify cells with intact nuclei; antibodies against proteins called cytokeratins, which are present in epithelial cells but not in blood cells; antibodies that bind to CD45, a molecule present on the surface of normal white blood cells but not epithelial cells; and, if desired, a fourth probe to stain any particular protein biomarker of interest. The team’s imaging system captures pictures of all the cells on the slide (approximately 3 million), and records the precise coordinates of each cell. The platform also analyzes each cell for 90 different parameters—the fluorescence intensity of the four fluorescent markers and 86 different morphological parameters. Because there are millions of normal cells on the slide, the pattern recognition software develops a good sense of what a “normal” cell looks like and can easily pick out any outliers, says Murali Prahalad, president and CEO of Epic Sciences.

Application: Using this strategy, Kuhn’s team analyzed CTCs from patients with metastatic breast or prostate cancers. They reported that their approach detected significantly more CTCs, and in a larger proportion of patients, than the gold-standard CellSearch assay (Phys Biol, 9:016003, 2012).

Bonus: The platform can be used to find and study other types of rare cells, potentially in any type of biological fluid, Prahalad says. For example, using the same platform, Kuhn’s group developed an assay to identify elevated levels of endothelial cells—which normally line the insides of blood vessels—in the blood of patients who had recently experienced a heart attack (Phys Biol, 11:016002, 2014).