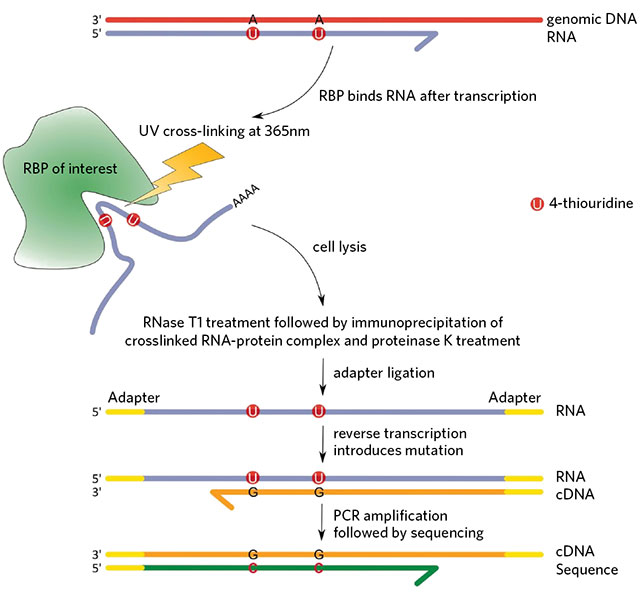 PROTEIN CLIP: Sites on RNA that interact with an RNA binding protein (RBP) can be identified in complexes fished out of cells using immunoprecipitation, an approach called CLIP. In one variation on this technique, known as PAR-CLIP, cells are incubated with a light-reactive nucleoside analog, 4-thiouridine?(U), that becomes incorporated into RNA. Irradiation with UV light crosslinks RNA-protein complexes, which are then isolated from cell lysates using antibodies. RNA located outside the protein binding pocket is degraded, and the remaining sequence is transcribed to DNA, a process that leads to a characteristic T to C mutation wherever the nucleoside analog incorporates. BRIEFINGS IN FUNCTIONAL GENOMICS, DOI: 10.1093/bfgp/elu020, 2014

RNAs are molecules with a wide-ranging repertory, acting in roles that frequently defy dogma and resist being neatly classified into well-defined categories. Once thought of as simply passive intermediates involved in the translation of genes into proteins, RNAs are now known to...

However, one thing that all RNAs are believed to do is function through interactions with proteins. Figuring out the details of these interactions, such as when and where they take place, can provide important clues about the roles of coding and noncoding RNAs, which may help to uncover previously unknown functions of the ubiquitous molecules. The Scientist spoke with a few of the experts developing and using techniques to probe RNA-protein complexes. Here, we bring you insight into some of the latest advances for studying such interactions.

Getting a GrIP on RNA-protein Complexes

One of the most common methods for studying the RNA-protein interactions that occur in vivo uses antibodies to fish out a protein of interest—along with any RNAs bound to it—from cell or tissue extracts. Following purification, RNAs can then be identified through PCR, sequencing, microarray, or other means.

One form of the technique, known as UV crosslinking and immunoprecipitation (CLIP), involves exposing cells to 254 nm ultraviolet light, which covalently crosslinks RNAs and proteins only at sites of direct contact (Methods, 37:376-86, 2005). Following immunoprecipitation, the recovered complexes are digested with a protease. Adaptor sequences are then ligated to both ends of the remaining RNA, one of which serves as a priming site for reverse transcriptase to generate cDNA, while both serve as priming sites for subsequent PCR amplification. However, the RNA ligation steps are inefficient, “which means you have to start with quite a lot of material . . . to get genome-wide coverage,” says Jernej Ule, a molecular neuroscientist at University College London who helped to develop the technique.

In addition, the reverse transcriptase has difficulty passing over the crosslink sites on RNAs that contain residual amino acids, yielding cDNAs that are truncated just before the crosslink location. Those truncated sequences cannot be identified by CLIP, because they lack one of the introduced priming sites required for PCR amplification.

What’s more, crosslinking at 254 nm is relatively inefficient, and the assay doesn’t reveal the precise location of RNA-binding proteins on their targets, though Ule says the binding sites can be inferred in some cases using bioinformatic analysis of the binding sites. “The location where [an RNA-binding protein] binds will give you a good idea of what [that] protein is doing,” says Markus Hafner, who studies RNA-protein interactions at the National Institute of Arthritis and Musculoskeletal and Skin Diseases in Bethesda, Maryland. “If it’s binding to a coding sequence, or the 3’ untranslated region, or within an intron, all of these are very different things, so it’s important to really pinpoint it with nucleotide resolution.”

To overcome some of these limitations, Ule has since developed a modified protocol called iCLIP (individual-nucleotide-resolution CLIP) that can identify truncated cDNAs and better pinpoint the positions of the RNA-protein crosslink sites (Nat Struct Mol Biol, 17:909-15, 2010). The method is similar to CLIP, but differs in the preparation of the cDNA library: rather than ligate adaptor sequences to both ends of the RNA, only the sequence needed for reverse transcriptase priming is added. The primer used for reverse transcription in iCLIP contains a cleavable overhang region with a short barcode sequence and the second priming site for the subsequent PCR reaction. Following reverse transcription, the resulting cDNAs are circularized, effectively attaching the PCR priming site to the opposite end of the cDNA sequence. Then the cDNAs are cut at the cleavage site introduced by the overhang region of the primer, amplified, and sequenced. The nucleotide upstream of the crosslinking site can be readily identified, as it will be the nucleotide in the genome that precedes the matching sequence in the amplicon.

Another method, known as PAR-CLIP (photoactivatable-ribonucleoside-enhanced CLIP), which Hafner helped to develop while a postdoc in Thomas Tuschl’s lab at Rockefeller University in New York City, introduces a light-reactive ribonucleoside analog in the crosslinking reaction. After cells incorporate the synthetic nucleoside 4-thiouridine into new RNA, they are irradiated with 365 nm UV light to crosslink the labeled RNA and interacting proteins. When crosslinked, the nucleoside analog typically leads to a T to C mutation in the cDNA sequences that correspond to the sites of interaction (Cell, 141:129-41, 2010). This approach makes it possible to distinguish between direct and indirect interactions, Hafner says. “Basically everything that doesn’t have this mutation, you can be confident that these were not interacting molecules, so you can set them aside.” 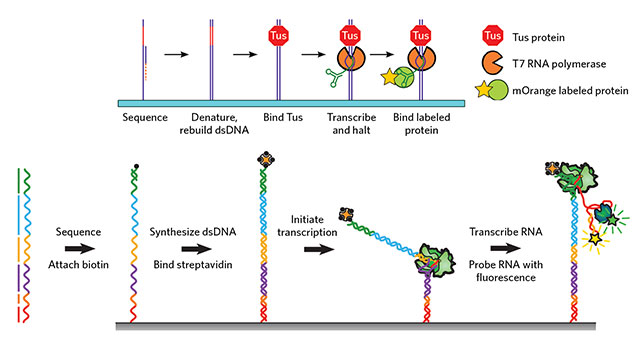 IN SEQUENCE: To analyze RNA-protein interactions on a DNA sequencing instrument, researchers first design and then sequence a library of DNA molecules of interest. The sequenced DNA strand is then degraded, and double-stranded DNA is synthesized. Next, researchers add bulky proteins that bind to particular sites in the DNA. One approach, known as HiTS-RAP, employs the protein Tus (top, red), while another method, called RNA-MaP, uses the protein streptavidin (bottom, orange cross). Then RNA polymerase is added, which begins synthesizing RNA but halts when it encounters the protein bound to the DNA, effectively securing the RNA to its template. Finally, a fluorescently labeled RNA-binding protein of interest is added and imaged.TOP: NATURE METHODS, 11:683–88, 2014; BOTTOM: NATURE BIOTECHNOLOGY, 32:562–68, 2014

For researchers interested in making quantitative measurements of RNA-protein affinities, crosslinking methods are not the way to go. Instead, you might consider using one of two new methods that convert an Illumina high-throughput sequencer into a platform for quantifying RNA-protein binding on a large scale.

The techniques harness the optics of the Illumina Genome Analyzer IIx—which is designed to image the sequential incorporation of fluorescent nucleotides into oligos synthesized from immobilized DNA templates—to take pictures of RNA sequences binding to a fluorescently labeled protein of interest. The trick, though, is to convert the immobilized DNA templates into RNA, and retain that RNA at the site where it is made to enable subsequent measurements of protein binding. Each method accomplishes this in a different way.

One approach, known as HiTS-RAP (high-throughput sequencing–RNA affinity profiling), devised in the Cornell University lab of John Lis in collaboration with researchers from the San Diego–based Illumina, Inc., uses a bacterial DNA–binding protein, Tus, which binds to a specific site near the free ends of the immobilized DNA templates. RNA polymerase then transcribes the DNA to RNA, but halts when it encounters Tus, effectively tethering the newly transcribed RNA to its template.

In the other approach, called RNA-MaP (RNA on a massively parallel array), developed in the lab of William Greenleaf at Stanford University, the DNA templates terminate with a biotin molecule that is bound by the protein streptavidin, which serves as a roadblock for RNA polymerase and achieves the same tethering of the newly transcribed RNA.

To measure RNA-protein binding affinities, a fluorescently labeled protein of interest is flowed over the RNA in increasing concentrations and imaged to measure the fluorescence intensity of the proteins bound to each RNA. The data can then be used to calculate the dissociation constant for the RNA-protein complex. 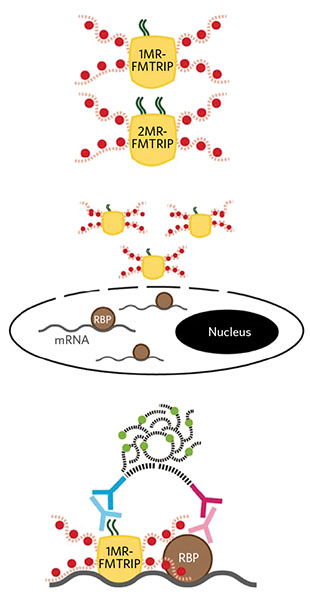 SPOTTING COMPLEXES: To visualize RNA-protein interactions inside cells, researchers first prepare a fluorescent nucleic acid probe (yellow with red dots, top). Next, cells are permeabilized to allow uptake of the probe, which binds its target RNA (middle). Then the probe and RNA-binding protein (RBP) are labeled with antibodies (light blue and light pink, bottom). If the RNA and RNA-binding protein of interest are in close proximity, oligos (black) attached to secondary antibodies can be ligated, amplified, and labeled with a differently colored fluorescent probe (green).NUCLEIC ACIDS RES, DOI: 10.1093/NAR/GKS837, 2012For researchers who’d like to analyze RNAs and proteins in their native cellular context, the previously described techniques won’t cut it. To characterize RNA-protein interactions at the cellular level, researchers can image overexpressed, fluorescently labeled versions of their RNA and proteins of interest (see “Live and In Color,” The Scientist, April 2012). But if your goal is to look at the endogenous, unmodified RNA and protein molecules in the cell, a method recently developed by Philip Santangelo and colleagues at Georgia Institute of Technology might be right for you (Nucleic Acids Res, 41:e12, 2013).

The first step is preparation of multiply labeled tetravalent RNA imaging probes (MTRIPs), which Santangelo and colleagues first developed in 2009 (Nat Methods, 6:347-49, 2009). The MTRIPs consist of a collection of short strands of fluorescently labeled RNA-DNA chimeras designed to bind a specific RNA target. Each nucleic acid strand in the chimera is labeled with multiple molecules of a single fluorophore and conjugated to a molecule of biotin at one end; these oligos are then mixed with peptide-tagged neutravidin, which binds to biotin and clusters the strands to form an MTRIP.

Once the probes are prepared, they are added to live cells to label the RNA of interest. Santangelo says he usually uses a mixture of three different MTRIPs specific for an RNA to achieve a signal that is bright enough for single-molecule resolution and easily distinguished from any unbound probe. To get the MTRIPs into cells, Santangelo’s team employs streptolysin O, a bacterial toxin that reversibly pokes holes in cell membranes. Once the probes have bound their target RNA, the researchers fix the cells and then perform a so-called proximity ligation assay between the RNA probes and the protein. They label the MTRIPs and the RNA binding protein of interest with different primary antibodies. Next, the cells are incubated with two different secondary antibodies, each conjugated to a short DNA oligo. If the RNA and protein of interest are within about 30 nm of each other, the oligos on the antibodies can be ligated to form a circular structure, which can then be amplified using a polymerase and labeled with fluorescent probes. “So in one color, we can see the RNA, and then in a different color, we can see if the interaction has happened,” Santangelo says. “That way we get a measure of how much RNA is there, and how many interactions have occurred on a per-cell basis.”