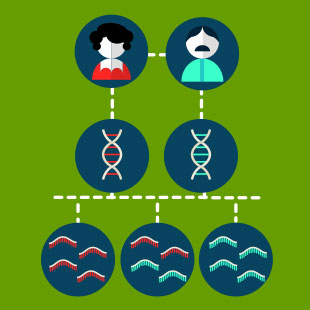 © ISTOCK.COM/OLIANA/ANNA_LENIThroughout the genomes of mammals and plants, certain genes carry marks that indicate whether they came from mom or dad. Typically, these marks are methyl groups that regulate gene expression so that one parent’s allele is selectively expressed. Together, these imprinted genes make up the imprintome.

Scientists used to search for imprinted genes one by one, but thanks to modern sequencing techniques, they can now scan entire genomes. The precise size of the imprintome is uncertain. Estimates suggest there are approximately 100 to 150 or so imprinted genes in humans and in mice, and 90 or more in the plant model Arabidopsis thaliana. Many imprinted regions of the genome can contain sequence variants linked to human diseases, such as diabetes. Because only one copy of an imprinted gene is expressed, loss-of-function mutations are more likely to cause problems in an imprinted situation.

There are other ways, too, of being misled. Some papers have identified upwards of 1,000 potentially imprinted genes, only to have most shot down later as false positives. These false hits can arise when cells select one allele for other reasons—it could be random or specific to the allele’s sequence, rather than its parent of origin.

The need to accurately evaluate sequences makes a bioinformatician a key member of any imprintome team, advises David Monk of the Bellvitge Institute for Biomedical Research in Barcelona, Spain.

The Scientist asked imprinting experts to share their techniques for teasing out the imprintomes of mouse, Arabidopsis, and human, and to propose some ideas for new technologies and investigations that would move the field forward.

In 2014, Szabó and colleagues reported how they’d used mouse embryonic fibroblasts to test whether the relatively new method of RNA sequencing could reveal known and novel imprinted genes. The team started with two different strains of mice, which had known genomic differences. They crossed these strains and sequenced the RNA of the resulting offspring.

FINDINGS The researchers identified 32 known imprinted genes, but no new ones, implying that the list of imprinted genes in the mouse—at least in embryonic fibroblasts—is nearly complete, says Morison, who was not involved in the study (Nucleic Acids Res, 42:1772-83, 2014).

WISH Szabó would like to see techniques for single-cell imprintome analysis, as well as more studies of different tissues at different times during development, which might still yield more imprinted genes. 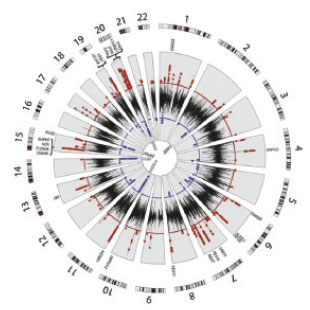 Methylation is typically associated with the silencing of the nonexpressed allele, making it a convenient marker for imprinted genes, though it’s possible for patterns of differential methylation to exist in tissues where both alleles are expressed. Nakabayashi, Monk, and collaborators studied methylation patterns in adult and umbilical blood and placenta cells from healthy volunteers; brain tissue from a brain bank; and a cultured liver cell line. The team treated genomic DNA with bisulfite, which converts only unmethylated cytosines to thymines, leaving methylated cytosines unaltered. By sequencing, they could determine gene methylation patterns. The researchers figured that genes that were consistently half-methylated across a variety of tissues were possibly imprinted.

To confirm imprinting and identify the parent of origin, the authors then compared those methylation patterns to methylation in tissues affected by a phenomenon called uniparental disomy, in which both copies of a genome (or a chromosome or partial chromosome) come from one parent. One such sample was from growths called hydatidiform moles that develop in unviable pregnancies, when an egg lacking a nucleus is fertilized by two sperm, or by one sperm that has its genome duplicated. The other samples were from people who carried blood cells with duplicated chromosomes from either their mother or their father.

FINDINGS The authors picked up 21 novel sites of differential methylation, 15 of which occur only in the placenta—and none of which were imprinted in mouse crosses they conducted (Genome Res, 24:554-69, 2014). “Imprinted loci are newly gained, and probably lost, during evolution,” says Nakabayashi.

WISH With human tissues hard to come by and the mouse imprintome not matching the human one, Nakabayashi would like to see more research on primate imprinting.

“Scalability is the next question,” adds Monk. He’d like a way to perform single-cell analysis using microarrays, instead of full sequencing, but chip-based bisulfite methods require more nucleic acid—about a microgram—than one cell can provide.

In plants, imprinting only occurs in the endosperm, the triploid seed component that nourishes an embryonic plant. Many scientists suspect that imprinting, in both animals and plants, happens because the paternal genome promotes growth of the biggest possible offspring, while the maternal genome promotes conservation of limited resources. Gehring and colleagues were curious whether less imprinting would occur in A. thaliana, a self-fertilizing plant in which the parental interests ought to be aligned, than in the outcrossing A. lyrata. They crossed two A. lyrata strains, dissected the seeds by hand, and performed paired-end RNA-seq and bisulfite-seq on the resulting endosperms to identify the species’ imprintome. They compared this to the imprintome they had previously determined for A. thaliana (Nat Plants, 2:16145, 2016).


WISH Gehring would like to isolate endosperm without dissecting tiny seeds by hand; she hopes that the triploid nature of endosperm tissue (with two maternal and one paternal genomes) will help her to isolate it from other, diploid cells by flow cytometry. 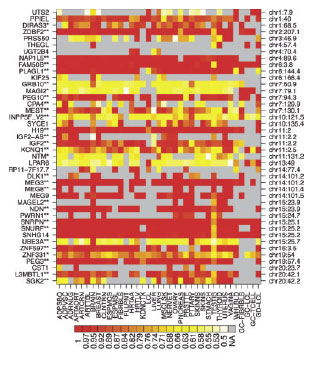 Thanks to widely available transcriptome databases, some scientists don’t even have to collect new tissue to search for imprinted genes. Lappalainen is a collaborator on the Genotype-Tissue Expression (GTEx) database (see table on opposite page), which includes genotyping and RNA sequencing from postmortem samples of multiple tissue types. In a recent study, she and colleagues used data from that collection to hunt for imprinted genes. In any case where an individual was heterozygous at a given gene, the researchers could look for allele-specific expression. They did their best to filter out genes known to have random monoallelic expression, single-allele expression due to sequence variants, or RNA patterns that might look like monoallelic expression due to technical issues with the sequencing.


WISH The ideal way to do this kind of analysis would be with large family data sets with diverse tissue types, so that the researchers know the parental genotypes, but Lappalainen says only data sets from blood samples are currently available.

Correction: The original version of this article stated that patterns of genetic imprinting vary between tissues and developmental stages. In fact, imprinting patterns are consistent across tissues and development; what varies is how cell types read those imprinting makrs and whether they express the imprinted alleles differently. This incorrect statement has been removed from the article. The Scientist regrets the error.