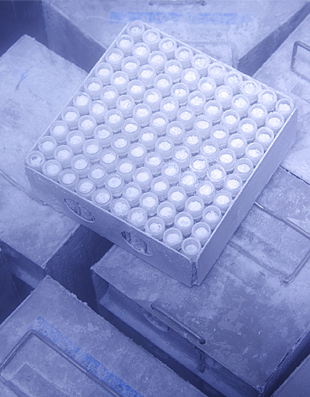 © ISTOCK.COM/ERIK VAN HANNENSay you’re heading out of town on vacation. You and your colleagues have been trying to assemble some new genetic constructs, but so far all you’ve got is a set of purified inserts, PCR products, and half-finished plasmids. As you run out the door to catch your flight, you hurriedly place them all in a box in the –20 °C freezer, without logging their location in your notebook.

Your colleagues want to continue the work, but they don’t know where to look for the samples. And you? You’re off the grid, scuba diving in the Turks and Caicos.

It’s a truism of today’s life-science laboratories that their most valuable assets are typically housed either in identical polypropylene Eppendorf tubes in the freezer, or in screw-cap vials under liquid nitrogen. There’s little room to write on those tubes, and adhesive labels can come loose. Even...

The problem is especially acute in large labs with a steady turnover of grad students and postdocs, but even modest operations are not immune. Samples get moved, boxes misplaced, and labels smudged. Projects may get put on the back burner, only to be resurrected years later. Good documentation of exactly which sample is where is key to successfully bringing such projects back to life.

The Scientist asked four laboratories about the strategies they use to keep their precious samples in order. This is what we learned.

PROBLEM: Daley’s lab has from 20 to 40 lab workers at any one time, sharing three –80 °C freezers and two liquid-nitrogen tanks. They generate a lot of reagent vials, offering boundless opportunities for samples to get misplaced or lost.

SAMPLE-TRACKING SOLUTION: Daley is a pioneer of human embryonic and induced pluripotent stem cell (iPSC) research. His team has developed countless cell lines and reagents over the years, many of interest to the wider scientific community.

When lab manager Beth Kaleta joined in 2007, the only clue to navigating that collection was a binder with “a lot of chicken-scratch” detailing what reagents were where. So, she started an Excel spreadsheet to keep track of everything—that is, plasmid A is located in freezer 3, shelf 2, box 4, spot D2. Every researcher since 2007 has had their samples logged in this fashion, Kaleta says. “It’s the older stuff that’s hard to inventory,” as it isn’t always possible to match a tube with a lab notebook entry. The lab is also considering a sample barcoding strategy, though no decision has yet been made.

Every postdoc in the lab is guaranteed at least one full rack in liquid nitrogen (five boxes, 81 samples per box) and one rack (16 boxes) in the ultralow-temp freezer. While in the lab, researchers are in charge of their own material. That can present a problem if a postdoc leaves suddenly, as there may be insufficient documentation of what he was working on and where he kept it. “One person just up and left the lab, and I had no idea what her stuff was,” Kaleta says.

When someone departs, Kaleta performs an exit interview in which she and a senior scientist meet with the researcher to ensure that critical reagents and cell lines are accounted for. Only some materials are retained, she notes: Key cell lines are passed to the Harvard Stem Cell Institute’s core laboratory for expansion and distribution, freeing the lab from getting overwhelmed by requests. Important plasmids are stored and/or transferred to Addgene, a nonprofit biological reagent repository and distributor, which currently has 75 Daley lab plasmids available among more than 33,000 deposited by 2,000 labs from all over the world. (See “Sharing Made Easy,” The Scientist, September 2012.) Generally, the lab retains two vials of each reagent for itself. “That usually frees up a decent amount of space,” Kaleta says.

According to Kaleta, transitioning from binder to spreadsheet has minimized the number of times the lab comes across reagents they simply cannot identify. But it still happens. One former postdoc, she says, designed multiple iPSC lines and named them using a coding strategy only the postdoc knew—and has since forgotten. “We had to throw some things away.”

PROBLEM: Starting in 2005 the Pawson lab, in collaboration with other scientists at LTRI, began accumulating clones from the US National Institutes of Health’s human and mouse Mammalian Gene Collection (MGC) libraries. As they acquired what became tens of thousands of bacterial stocks, they needed a way to keep track. 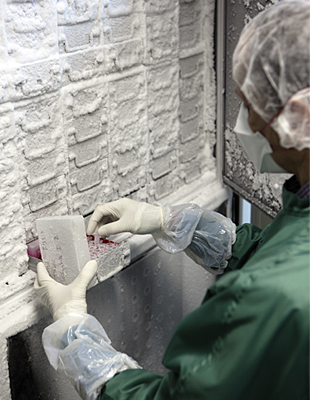 © ISTOCK.COM/ANNEDDESAMPLE-TRACKING SOLUTION: LTRI’s MGC clone collection was purchased in fits and starts, says staff scientist Karen Colwill—a few thousand here, a couple thousand there. Those clones were shipped in microtiter plates, and that’s how they are stored today. The collection comprises 70,791 clones arrayed in 751 96- and 384-well plates stored in a single –80 °C freezer, with 25 racks and 66 plates per rack. Naturally, finding any one clone requires solid bookkeeping, as does locating any of the institute’s other reagents, including nearly 1,000 cell lines stored in liquid nitrogen. Colwill and lab software engineer Marina Olhovsky codeveloped OpenFreezer (openfreezer.org) to make that possible (Nat Methods, 8:612-13, 2011).

Designed for permanent and secure reagent archiving and simultaneous multiuser access, OpenFreezer is a free, open-source, Linux-based Web application. “It’s not a simple download onto a Windows machine,” Colwill says. “You need to have someone with some reasonable understanding of programming” to get it up and running. Still, she says, it is “reasonably user-friendly” and “intuitive,” and more than 20 institutions use the application.

Users can customize OpenFreezer to track and inventory any type of reagent, but by default it can handle plasmids, inserts, oligonucleotides, and cell lines. The database also captures associated variables, such as nucleic-acid sequence, sample concentration and volume, and, of course, storage location. Users interact with the system via a basic Web browser, and a mobile app is in development, Colwill says. A new release, anticipated sometime in 2015, will include modules to add protocols and track lab orders.

OpenFreezer allows users to search for samples by filters such as keywords and database identifiers, and to identify reagents based on physical location. According to Colwill, the Lunenfeld OpenFreezer database currently tracks some 186,000 samples representing multiple labs and users. Those users are responsible for ensuring that the database remains up-to-date, of course—the system falls apart if researchers store samples without logging them in and recording their vital stats. Still, she says, it should give lab managers greater confidence in using and distributing key reagents, as labs are obligated by convention to send published reagents to other researchers upon request. “It really makes it that much easier to reuse a clone generated by a former lab member when it’s that well documented.”

PROBLEM: The Johns Hopkins Biological Repository (JHBR) occupies 8,000 square feet of lab and storage space split between two locations. It houses more than 2.5 million biological specimens collected over 30 years—everything from blood serum and nucleic acids to toenail clippings and hair—stored in 62 vapor-phase liquid-nitrogen tanks. Being able to retrieve samples on demand is of paramount importance.

SAMPLE-TRACKING SOLUTION: In 1997, Stacey Cayetano, clinical laboratory manager for the JHBR, began investigating the phasing-out of handwritten labels in favor of cryogen-safe sample barcoding to have “a more seamless transfer of data.” The software system she selected was Freezerworks (freezerworks.com) from Dataworks Development, Inc.

At the time, Cayetano explains, Freezerworks was the most user-friendly solution she could find, and also the most configurable. Among other things, JHBR stores patient samples for human clinical trials, and the information it captures for each one varies with the specific research protocol in the trial. “At any given time we are juggling 30 to 40 research protocols, so we needed flexibility,” Cayetano says.

Freezerworks is a relational database that links samples and sample properties to their locations. JHBR stores anonymized info on what a sample is, how it was processed, and its volume. Users can execute fairly granular searches, Cayetano says. For instance, given a list of patients that meet certain demographic requirements (JHBR does not store such data, for privacy reasons), users can then request that JHBR pull, say, all HIV-negative sera of more than 500 μL that have never been thawed. “Freezerworks would give us the subset of samples that meet that criteria,” she says.

Like OpenFreezer, Freezerworks uses a client-server architecture. The Johns Hopkins School of Public Health maintains the server, Cayetano says, and JHBR employees access it on workstations. There’s also a Web interface, so remote users with appropriate permissions (such as research clients) can search their samples in a read-only mode, then send pull requests to JHBR staff for processing.

The system, she says, is simple to use—“I’ve probably taught 75 or more techs how to use the software, easily”—and Dataworks Development has been responsive to addressing bugs and feature requests, she adds. Cayetano budgets about $5,000 a year to maintain a service contract for the software, which gets her maintenance upgrades gratis, but major upgrades are extra. “I’ve been using [the software] for so long, it’s a standing line item in my projections,” she says.

But should the company stop supporting the software, JHBR won’t be stuck with millions of records it can no longer access; Cayetano could simply export the data into a flat file format and import it elsewhere, she says.

PROBLEM: The Xiao lab has more than 2,700 DNA oligonucleotides in its collection, whose specifics and locations were tracked on different Excel spreadsheets. Keeping those spreadsheets standardized and up-to-date was well-nigh impossible, and finding a particular reagent (and its sequence) could take 30 minutes or more. “It was no way to live,” says Harley King, a grad student in the lab. 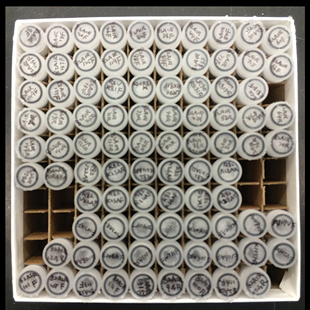 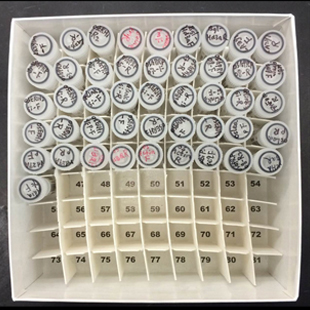 Quartzy is a free, cloud-based lab management system introduced in 2009. Among other things, it allows users to upload reagent storage info in the form of Excel spreadsheets. A high school intern spent a few weeks organizing the lab’s collection, moving reagents from disordered boxes into boxes that were numbered, and logging the info as he went. “Once we were on board, we’ve never looked back,” King says.

In addition to inventory management, Quartzy also facilitates reagent ordering, document storage (for instance, standard operating procedures), and instrument scheduling. Users can search by location or content, and can submit purchase requests directly to the lab manager. The software even suggests alternative pricing for needed reagents—indeed, Quartzy has partnered with life-science tools vendors to provide these suggestions, which explains its pricing model. “The other day, they saved me $12 on agarose,” King says.

Jerrold Turner, a professor of pathology at the University of Chicago, also uses Quartzy, but only for instrument scheduling and order tracking; freezers he organizes with spreadsheets. Quartzy, he says, would be “great,” but “like all solutions I’ve seen, it falls down at the human level,” explaining that it’s difficult to reliably keep such databases up to date. “Organizing people in a lab can be like herding cats,” Turner says.

Turner does keep his mouse colonies and liquid nitrogen tanks organized with software, however. He uses a customized FileMaker Pro database to track the liquid nitrogen stocks, for instance, and ensures the database is current by having users go through a gatekeeper lab member to physically access the tanks themselves. For mice, his group began using an online solution called mLIMS last year. “Effective tracking has helped lab members think through their strategies more efficiently,” Turner says. “Our per diem costs have been cut by 40 percent with no loss in productivity.” 