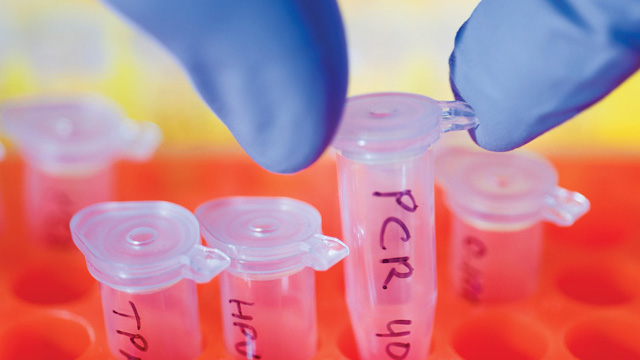 Not quite 30 years old, the polymerase chain reaction (PCR) is the workhorse of many biology labs. While the basic premise—the amplification of DNA samples of interest—has remained constant, creative twists have allowed scientists to adapt the technique to a plethora of applications, including determination of gene expression levels via copy numbers of specific RNA transcripts via quantitative PCR. Advances in genomics have pushed researchers to boost PCR’s utility by both narrowing the focus—concentrating on genetic information from just one molecule or cell—and widening the net, by increasing the number of reactions run in a single experiment.

One technique that researchers employ to reach these goals is high-throughput PCR that takes place in an emulsion. A water phase containing the PCR solution—primers, polymerase, nucleotides, and the DNA to be amplified—is mixed with oil to create an emulsion of tiny, suspended water droplets. Each droplet acts...

The amplification reaction can be carried out in many of the digital PCR machines on the market. (See “Prime Time for Digital PCR,” The Scientist, December 2011.) A plus is that the large number of individual reactions minimizes cross-contamination between products, but the greatest advantage is the ability to turn a tedious experiment into a high-throughput extravaganza.

Unfortunately, says Irene Tiemann-Boege, who studies genome recombination at Johannes Kepler University in Linz, Austria, emulsion PCR (ePCR) has a serious drawback for those hoping to cast a careful eye over the entire genome. In ePCR, “the product length is very short. With standard PCR, you can amplify 1 to 2 kilobases,” Tiemann-Boege explains, but “the maximum in ePCR is 150 base pairs.” Commercial ePCR can also be a problem for anyone needing reaction volumes larger than a picoliter, prompting scientists to continue searching for creative solutions, says Richard Novak, of the University of California, Berkeley.

Tiemann-Boege and Novak are two of many scientists tweaking ePCR to maximize its benefits while minimizing its weaknesses. Here are three case studies of researchers stretching ePCR’s capabilities.

Problem: Designing aptamers is generally a laborious, inefficient process. After amplifying a library of possible sequences, actually generating the aptamers is quite time-consuming. It involves cloning candidate aptamer sequences into plasmids, transfecting these into bacteria, growing up the bacteria, and picking clones for aptamer analysis. These candidate aptamers are sequenced—an expensive step—and their sequences compared to identify aptamers that might bind well. The last step, individually analyzing each aptamer’s binding, kills any flickering hope of high-throughput aptamer discovery.

Yang wanted to streamline the aptamer screening process so that only quality aptamers were sequenced. He hoped to avoid the drawbacks of using microbeads to isolate molecules into discrete reactions. “Running micrometer-sized beads in micrometer channels [of digital PCR machines] is prone to clogging,” he says, and, because beads have to squeeze through the channels, “the run rate is really slow.”

Solution: Yang’s group turned to agarose-based PCR, but jettisoned the microbeads. Instead, the agarose droplets themselves function as beads, Yang explains. Because agarose can be manipulated to go from squishy to solid and back again by adjusting the temperature, the agarose droplets can facilitate a PCR reaction and also act as solid, sortable beads. Using agarose alone also allows his group to make beads that can easily squeeze through the channels of a digital PCR machine at an extraordinary rate, says Yang.

The agarose beads are also easy to physically manipulate. “You can use tweezers to transfer up your [PCR] product,” says Yang. “How can you pick up an emulsion?”

One agarose for all: The method can also be used to analyze gene expression at the single-cell level by encapsulating cells in agarose droplets containing primers for a messenger RNA of interest. Yang’s group showed that they could use agarose-droplet PCR to measure different levels of expression of the cancer biomarker gene EpCAM in normal and cancerous cells. Previously, “you could microinject a molecular beacon into a cell to produce a fluorescent signal,” using the intensity to estimate the amount of mRNA present, Yang explains, but “one graduate student could only inject about 10 cells per day.” In contrast, Yang’s method for creating agarose-droplet encased PCR reactions can generate millions of individual reactions.

Project: Short PCR product length is not a problem for Richard Novak, a graduate student in Mathies’ lab who works on early cancer detection methods. He is looking for just one site in the genome, the t(14;18) chromosomal translocation that is a characteristic and early step in the development of follicular lymphoma. The goal, says Novak, is to find cancerous cells with just a few mutations, at a stage when the cancer is more readily treatable.

“From a research perspective, we also want to understand how this disease happens,” says Novak. “How do you go from one mutation to a thousand mutations, with all the genetic hallmarks of cancer?” But detecting mutated cells early in cancer development is difficult. Key mutations happen when the cancer is still only a few cells strong and essentially invisible to modern detection systems, says Novak. “If you can’t find [the cell], you can’t analyze it.”

Solution: Zeng and Novak used a microfluidic emulsion-droplet generator devised in Mathies’s lab, which uses micropumps to create nanoliter-sized droplets of aqueous PCR reagents—big enough to encapsulate whole cells—at a very high rate, by shooting them into a stream of oil. (See illustration below.)

Novak and Zeng added primer-coated microbeads (1 per cell) to their droplets of PCR reaction so that their amplified DNA would be easy to sort. They attached forward primers to their beads and added fluorescence-tagged reverse primers to the PCR mix, so that the beads would only glow if DNA had been amplified. The beads were then passed through a flow cytometer for easy scanning. To validate their method, the researchers quantified the number of rare pathogenic O157 E. coli cells in a population of many nonpathogenic bacterial cells by counting the numbers of red and green beads using flow cytometry (Anal Chem, 82:3183-90, 2010). 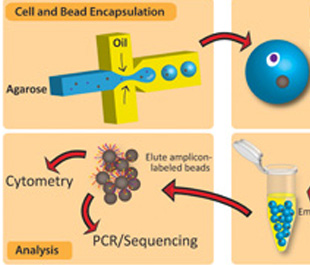 HIGH CAPACITY ePCR: Agarose gel lets researchers increase the volume of the PCR reaction to encapsulate a single cell and primer-coated bead for easier readout.
View full size JPG | PDF© 2011, JOHN WILEY AND SONS WITH PERMISSION FROM RICHARD NOVAKThe future is polymerized: Novak’s ultimate goal is tracking human cells, which present challenges not found in bacteria. Not only are mammalian cells larger, but cancer cells also acquire certain characteristics that stymie researchers trying to study them, says Novak. “It’s anecdotal, but their membranes appear to become more rigid. They’re harder to lyse,” Novak notes, which means the DNA in unlysed cancer cells often goes undetected. To correct this problem, Novak uses agarose, instead of water, to surround the cells and primer-coated beads with the PCR reagents. Agarose is semipermeable, which allows Novak to use “not very cell-friendly” cell-lysis and DNA-extraction reagents that can penetrate even rigid cancer cells to expose their DNA to PCR reagents. Novak can then run PCR reactions to detect his target translocation on the DNA entangled in the agarose. He and his colleagues used the TK6 human cancer cell line to show that they could indeed detect the t(14;18) translocation at the individual cell level (Angew Chem Int Ed Engl, 50:390-95, 2011). The next step will be to test the system using real patient samples.

Project: In order to better understand the mechanisms driving evolution of the human genome, Tiemann-Boege studies how recombination hotspots—areas where recombination occurs at a higher frequency than the rest of the genome—are regulated. She searches for recombination events in sperm using sets of single nucleotide polymorphisms (SNPs) as signposts. Her target SNPs are clustered within segments of DNA inherited from one parent called haplotypes. The nucleotide of each SNP in a haplotype varies among individuals and can serve as a marker for recombination events. For example, if chromosomes break and recombine within a stretch of DNA containing a known SNP haplotype, the nucleotide of a SNP can change—switching from A to C, for example. Catching active recombination is as easy, in principle, as checking to see if any of the SNPs have changed nucleotides.

Problem: Tiemann-Boege wanted to look at SNPs from single molecules of DNA to gain a clearer picture of the circumstances under which recombination occurs. Because each sperm cell carries only one copy of each chromosome, this would also give her information about recombination events at particular hotspots in individual cells. Moreover, she wanted her method to be high throughput, low cost, and easy, so that she could efficiently identify a recombination event that might occur once in a thousand sperm.

But SNPs in a given haplotype can be separated by hundreds or thousands of nucleotides, so Tiemann-Boege would need to sift through long stretches of DNA. Although she could use emulsion PCR to identify the SNP haplotype from each DNA molecule, the method couldn’t handle the kilobase-length pieces of DNA separating her SNPs. Finally, Tiemann-Boege wanted to avoid laboriously sequencing her amplified SNPs to identify whether a recombination event had occurred.

Solution: Since she only needed information about single-nucleotide changes, rather than all of the DNA separating them, Tiemann-Boege realized that by amplifying only short segments of DNA surrounding each SNP, she could still use emulsion PCR to create a high-throughput method to spot recombination on single molecules of DNA.

In order to generate unprecedented throughput—analyzing hundreds of thousands of molecules in one reaction—Tiemann-Boege turned to magnetic beads (PLoS ONE, e36064, 2012). She designed primers that encompassed 70 to 100 base pairs, well below the 150 bp maximum of emulsion PCR, to ensure she amplified the right SNPs. This strategy allowed Tiemann-Boege to coat her beads with forward primers designed to capture each SNP—up to three—in a haplotype. Using beads coated with primers, DNA molecules from sperm, reverse primers, and free nucleotides, she created an emulsion of aqueous droplets of the PCR reaction mixture suspended in oil.

At the end of the reaction, amplified SNPs coated the beads, and Tiemann-Boege used fluorescent probes specific for her SNPs to identify the altered haplotypes. Each of the four possible nucleotides at a SNP has its own fluorophore. If most beads in a sample glow red and green, but one glows red and yellow, she knows recombination occurred on that DNA molecule. Although the beads could be analyzed by flow cytometry, Tiemann-Boege finds it quicker and easier to array them on a microscope slide for fluorescence microscopy—a single image provides recombination information for many molecules.

Widening the focus: To provide even more information about recombination, Tiemann-Boege is working to get more than three SNPs onto each bead—although, for now, she admits that adding a fourth SNP is causing technical difficulties.