PROBING CHANNEL CONFORMATION: Combined patch-clamp and FRET measurements reveal the configuration of ion channels. As shown in the plot of the two measured signals (above, right), channels can adopt an “open” configuration in which no ions flow (region of low FRET efficiency but also low current, bottom left). ADAPTED FROM DIBYENDU SASMAL AND H. PETER LU

As your eyes scan this page, your brain is multitasking big-time. It’s engaged in a frenetic dialog with the muscles that control your eyes; neural pathways are flickering on and off to translate words into mental pictures; and memory circuits are working to store and retrieve information.

In every case, neurons are talking to each other in the language of action potentials: rapid electrical discharges across cellular membranes that propagate from one cell to the next like electricity in a wire, driven by ion flow through neuronal membrane channels.

The technique, says Thomas Knöpfel, Chair of Optogenetics and Circuit Neurosciences at Imperial College London, is “the golden standard” for electrophysiology measurements—at the single-cell level, that is. Patch clamping is exceptionally sensitive and accurate. But it’s also laborious and low-throughput. The human brain contains some 86 billion neurons. Even specialized neural circuits may contain hundreds or even thousands of cells. Yet patch clamping is not easily scaled beyond more than a handful. “There are heroic experiments where people patch-clamped five cells simultaneously,” Knöpfel says, but many more than that is impractical.

More recently, neuroscientists have embraced optical alternatives, using light to record and initiate ion-channel activity. The simplest option indiscriminately bathes tissues in organic fluorescent dyes. But more-targeted options exist, too, which offer multiple benefits: they are noninvasive, precise (they can be genetically targeted to specific cell populations), and highly scalable. Using them, researchers can study specific neurons over time in live and awake animals that are learning and interacting with their environment.

The Scientist asked four researchers about the tools they use in their own electrophysiology research. This is what they said.

PROBLEM: Patch-clamp data are essentially binary: ions are either flowing or they’re not. Lu wanted to explore the molecular configurations underlying those two states.

SOLUTION: Lu has for years been studying ion-channel function by combining patch clamping with an optical readout of channel conformation.

Here’s how it works: if two fluorescent molecules with precisely aligned excitation and emission characteristics are positioned within a few nanometers of each other, excitation of one dye will lead to emission of the other, a process called fluorescence resonance energy transfer (FRET). The efficiency of that energy transfer drops off sharply with distance, so by correlating electrical output and FRET efficiency, Lu can infer how a channel’s shape influences its properties.

Most of Lu’s earlier studies have involved ion channels in artificial membranes. But recently, he and his team upgraded to live cells (J Am Chem Soc 136:12998-13005, 2014). They expressed the four subunits of the NMDA receptor ion channel in cultured cells. One subunit was tagged with a FRET acceptor molecule. The FRET donor was coupled to glycine, an NMDA receptor agonist, which binds a different subunit. Then, the team simultaneously recorded the cells’ electrical activity and stimulated them with a laser tuned to activate the FRET donor, watching for an emission signal from an adjacent acceptor.

The data, Lu says, show clearly that the channel’s so-called “closed” state is really an amalgam of multiple conformations, all of which were “opaque by electrical measurement alone.”

“This is the most significant realistic picture now we can measure,” he says—information that could lead to more nuanced neurobiological modeling and drug development.

THE THIRD DIMENSION: Now that they have a handle on ion-channel conformation, Lu’s lab is upping the ante with a third axis of information: ligand binding. Does it matter if receptor ligands bind simultaneously, randomly, or in a defined sequence to open the channel, for instance? His lab plans to exploit the differential rotational properties of free and receptor-bound ligand molecules to find out. 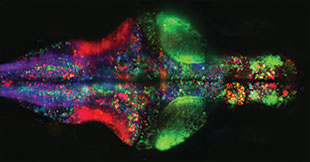 PROBLEM: In optical electrophysiology, Looger explains, calcium “is a proxy for voltage”—less direct, but yielding stronger signals. Calcium may be measured using fluorescent dyes or genetic reporters. The former are sensitive but untargeted; the latter are prone to false negatives, low sensitivity, and dim light emission.

SOLUTION: Looger and colleagues design genetically-encoded calcium indicators (GECIs), fluorescent proteins whose light output varies with calcium concentration. If paired to an appropriate promoter, they can be expressed in specific cell types of transgenic animals and tracked for weeks on end. The trick is to make the protein trigger every time the cells’ electrical needle jumps.

In 2009, Looger’s team announced GCaMP3, a GECI that could pick up electrical activity in neurons of living mice, fruit flies, and nematodes. “It was the best thing at the time,” he says, but it was still relatively deaf to calcium. A more sensitive GCaMP5 arrived in 2012, followed a year later by GCaMP6. “This one is earth-shattering,” Looger says, featuring brightness on par with version 5 coupled with greater sensitivity, faster kinetics, and an enhanced dynamic range (Nature, 499:295-300, 2013).

In one application Looger describes as a “tour de force,” the team used GCaMP6 to investigate the interplay between activity at input synapses and the cell body of a single neuron. By optically recording about 200 of these inputs at depths 120 μm below the surface of the brain of an anesthetized mouse, the group was able to work out how the cell integrates its many competing signals. “It turns out that, as expected, what the cell outputs is the sum of all the synaptic inputs,” he says.

TO VERSION 7: Looger says GCaMP6 is about as sensitive as he could ask. But development isn’t done. Version 7 variants, he says, will likely accommodate “niche applications,” such as the ability to record in cells that tend to “buffer” calcium or that fire exceptionally rapidly. The team also is moving in new directions, such as red-shifted GECIs and voltage sensors. GCaMP6 reagents are available from Addgene, the Bloomington Drosophila Stock Center, and the Jackson Laboratory. 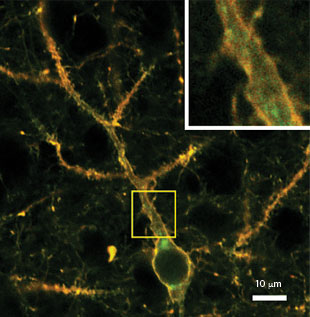 PROBLEM: Optical methods typically measure only surface fluorescence, as they cannot resolve brain structures deeper than about 50 to 80 μm. Knöpfel wanted to delve deep into the mouse cortex to visualize cells up to about 400 μm beneath the surface.

SOLUTION: Knöpfel develops optical reporters called genetically-encoded voltage indicators (GEVIs), which are alternatives to GECIs. In 2012, his team described VSFP Butterfly 1.2, a voltage-sensitive membrane-spanning protein whose two ends, which dangle in the cytoplasm, are coupled to fluorescent proteins (J Neurophysiol, 108:2323- 37, 2012). As the membrane potential rises and falls, Butterfly’s conformation shifts, bringing the two fluorescent proteins closer together or farther apart, a change that is reflected in the FRET efficiency between them.

The team originally tested that molecule in mouse brain slices using traditional (“one-photon”) microscopy techniques. But those don’t provide fine cellular resolution, Knöpfel says, and they cannot optically peel back layers of brain tissue. So more recently, his team turned to two-photon microscopy. Specifically, the researchers expressed VSFP Butterfly 1.2 in layer 2/3 pyramidal neurons in the mouse cortex (125–425 microns deep) and watched what happened when they disturbed the animals’ whiskers with puffs of air (Sci Rep, 3:2231, 2013).

One-photon imaging uses relatively short-wavelength photons, each of which is sufficiently energetic to excite a fluorophore, but which also tends to be scattered and absorbed by biological tissue, limiting penetration depth and image quality. Two-photon microscopy uses longer-wavelength, lower-energy photons, such that excitation requires that the fluorophore receive two photons nearly simultaneously. Longer-wavelength light passes through tissues relatively unimpeded, and since photon co-incidence is likely only in the focal plane, the resulting images are not blurred by scattered light when looking deep into the cortex to discern individual cells.

“It’s the very first time anybody has shown that one can use two-photon imaging in living animals using these genetically encoded voltage indicators,” he says.

DO-IT-YOURSELF: VSFP Butterfly 1.2 transgenic mice, prepared in collaboration with the Allen Institute for Brain Science in Seattle, are available from the Jackson Laboratory. But if you want to do two-photon imaging, you’ll need the right microscope, such as the Prairie Ultima IV (now available from Bruker) that Knöpfel used. He tricked it out with an infrared laser that costs, he estimates, “easily” $100,000. Once you round up the tools, however, the experiment itself isn’t hard, Knöpfel says: “I have a PhD student [who] started one month ago and today he got some signals.” 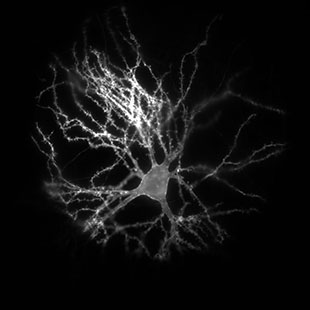 PROBLEM: Patch clamps allow both reading and writing of electrical activity. GECIs and GEVIs are read-only—they can record activity, but not change it. Cohen wished to bridge that gap.

SOLUTION: Indicator proteins are not the only genetically encoded electrophysiological tools. Also available are “actuators,” ion channels that cause cells to fire in response to light (a method called optogenetics). Researchers can theoretically combine the two to provide an “all-optical” electrophysiology alternative, but the wavelength of the light required to activate the actuator often conflicts with the indicator’s signal, muddying results. “You want to be able to independently control these two channels,” Cohen explains.

So Cohen, who describes himself as “a wayward physicist,” paired up with Ed Boyden of the MIT Media Lab and Robert Campbell of the University of Alberta to develop a solution (Nat Methods, 11:825-33, 2014).
Boyden’s lab tackled the actuator. By screening hundreds of light-gated ion channel sequences from microbial databases, they identified a channelrhodopsin from the freshwater green alga Scherffelia dubia that was sufficiently blue-shifted and responsive for their purposes.

At the same time, Campbell’s team tweaked a GEVI that Cohen’s lab had previously described. Archaerhodopsin, Cohen explains, is like “the world’s smallest photovoltaic device: light comes in and voltage comes out.” Cohen’s team had previously figured out a way to essentially run the molecule in reverse, so that in response to voltage changes it would fluoresce towards the red end of the spectrum. The problem, he says, was that the molecule still also affected membrane voltage. Using a directed-evolution approach, the Campbell group effectively decoupled those two activities, while also making two variants of the molecule that were brighter, faster, and more sensitive.

Finally, Cohen’s group placed the indicator (QuasAr1 or 2) and the actuator (CheRiff) on a single vector, called Optopatch, and delivered it to neurons derived from human induced pluripotent stem cells, as well as to cultured rat brain slices. They then projected light patterns on the cells and imaged the results at 1,000 frames per second to track action-potential propagation.

BENCH TO BEDSIDE: QuasAr and CheRiff constructs are available from Addgene. But to use them, users will also need a custom microscope. Cohen’s team spent about a year building its system at a cost of between $100,000 and $200,000. It includes a high-power red laser and a “digital micromirror device” to control illumination. Recently, Cohen teamed up with stem-cell expert Kevin Eggan of Harvard University to form Q-State Biosciences. The goal: to make Optopatch technology turnkey and apply it to neuroscience disease modeling and drug discovery. 