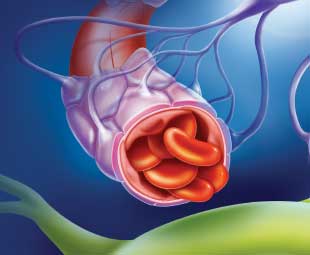 © JACOPIN/BSIP/SCIENCE PHOTO LIBRARYA molecular force field protects the human brain. Aided by support cells such as astrocytes and pericytes, endothelial cells lining brain capillaries produce junction-forming proteins to create a barricade with a high electrical resistance, as well as a range of transporters and receptor proteins that keep molecules in the blood from crossing into the brain. This blood-brain barrier protects the brain and spinal cord from infections, toxins, and inflammation—but also blocks drugs from reaching injured or dysfunctional neurons, hampering efforts to treat brain injury or disease.

Since the early 1970s, researchers have tried to mimic this protective layer of cells in vitro, first attempting to isolate intact brain capillaries, and, later, working to isolate and culture endothelial cells from animal tissue in single-layer sheets. Such static, two-dimensional cultures are still widely used, particularly in screening new drug molecules. As cell culture techniques have advanced in the...

“The greatest unmet need is a standardized model representing all the complexities of an intact brain endothelium that works in a high-throughput environment,” says Birger Brodin, a professor of pharmacy at the University of Copenhagen in Denmark. “We have many good in vitro models, but we don’t have a one-size-fits-all model.”

Sources of cells, their numbers, and how they are co-cultured can all vary, so picking the ideal in vitro model for a study depends on the research question at hand, Brodin adds. The Scientist spoke with experts about the myriad options and their varied uses.

How many cell types, and from where?

Endothelial cells grown in single-layer sheets naturally form tight junctions to create a barrier with high electrical resistance, but they have a major drawback: isolated endothelial cells gradually lose their barrier functions without the presence of other cell types that they normally interact with.

In 2007, Mária Deli of the Hungarian Academy of Sciences and colleagues found that a more anatomically correct model of the blood-brain barrier needed to include at least three cell types. For these models, rat endothelial cells and pericytes, which support the maintenance of capillaries throughout the body, were grown on the surface of a permeable membrane that formed a small well inside the larger well of a standard tissue culture plate. The team simultaneously cultured rat astrocytes, star-shape glial cells that perform various supporting and immune functions within the brain, on the base of the larger well (Cell Mol Neurobiol, 27:687-94, 2007). The resulting structure better reflected the blood-brain barrier’s electrical resistance properties and the expression of various tight junction proteins, small-molecule transporters, and efflux pumps seen in the blood-brain barrier in vivo, says Deli. The permeability of this “triple-culture” model, when tested with 19 drugs, was similar to that in vivo in a mouse.

Deli’s lab uses rat cells for most triple-culture studies. Rat- or mouse-based models are suited to complex triple culture models, as all three cell types can be readily obtained and data correlated with in vivo experiments. These rodent-cell models are also relevant to research involving knockouts or transgenic cell lines, or in drug screening where these animals are used in preclinical studies. Other researchers have played mix-and-match, growing bovine endothelial cells with rodent astrocytes, for example. Different brain sizes can necessitate this; larger bovine or porcine brains yield more cells, and can be obtained at slaughterhouses, says Brodin.

Despite the benefits of animal-derived cultures, however, researchers acknowledge that human cells are the most relevant to understanding human physiology. “The lack of a good source of human endothelial cells until a few years ago has been recognized as one of the main barriers in the field,” says Peter Searson of Johns Hopkins University.

In 2012, researchers successfully derived brain endothelial cells from human stem cells, a method that’s now gaining traction, particularly in microfluidic and 3-D models that aim to recapitulate the morphology and biology of the blood-brain barrier (Nat Biotechnol, 30:783-91, 2012). Having access to these cells is a huge boon, though the differentiation protocol is “tedious, time-consuming, and expensive,” Searson says, requiring about 10 days to complete. “But the relative benefits are enough that I think there will be more implementation as time goes on,” he adds.

Deciding which species and how many cell types to use is a matter of practicality as well as of the research question at hand. Each cell type plays a distinct role. Astrocytes, which are now used in some way in most models, induce endothelial growth by releasing as-yet poorly understood signals. Pericytes boost barrier properties such as electrical resistance and the expression of efflux transporters in rat and human stem cell–derived models, but their functions are less evident in bovine and porcine models.

When investigating basic biology such as how pathogens enter the brain, or how disease affects the blood-brain barrier, including all three cell types is likely to be important. And while triple cultures can be time-consuming and expensive, they also require more expertise. “If you’re studying the role of one receptor on endothelial cells and it’s sufficiently expressed in a single cell [type] culture model, then there may not be a need to attempt triple cultures,” Deli says. The same goes for testing drug molecules, where the most important barrier property is a high electrical resistance, she adds. “The question of which cell type induces the blood-brain barrier properties is not as important as the quality of the endothelial layer.” 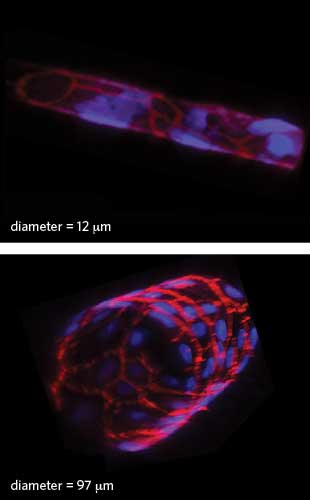 ENCIRCLING CELLS: Confocal micrographs show stem-cell derived human brain endothelial cells grown around glass rounds to form microvessels of different diameters connected by cell-cell junctions (red). PLOS ONE, doi:10.1371/journal.pone.0152105, 2016Microvessels and capillaries in vivo are tubular, and increasing evidence suggests this architecture is critical to blood-brain barrier functions. “Our ultimate goal is to recapitulate the 3-D geometry of the vasculature in the brain with endothelial cells, astrocytes, and pericytes that mimic at least some of the aspects of the functionality,” says Searson.

In a 2013 study, he and his colleagues compared how endothelial cells grew when cultured on flat surfaces versus on rods of dimensions similar to blood vessels. Unlike endothelial cells from other tissues, which grow along the length of the rods, human stem cell–derived brain vascular endothelial cells prefer wrapping around them (Front Neuroeng, doi:10.3389/fneng.2013.00007, 2013). “They’re programmed to like the curvature, which we think promotes their being able to form those tight junctions with themselves,” he says. Similarly, astrocytes take on different shapes depending on culture conditions. In 2015, Searson and his colleagues described growing astrocytes along a cylindrical cell culture such that the cells mimicked their star-shape in vivo morphology, with long extensions radiating from the cell body to form contact points known as end feet along a blood vessel (Biomaterials 42:134-43, 2015).

Fluid flow within microfluidic and 3-D cultures also mimics the shear stress that endothelial cells experience when blood flows through vessels, which triggers the cells to produce higher levels of barrier-specific proteins, similar to levels observed in vivo. To study how culture conditions affect results, Anna Herland, a research associate at Harvard University, and her colleagues constructed a triple-culture microfluidic model and exposed cells to tumor necrosis factor α, a common inflammatory protein. They found marked differences in the roles of astrocytes and pericytes in responding to inflammation, a distinction that hasn’t been seen in static co-culture models (PLOS ONE, doi:10.1371/journal.pone.0150360, 2016). “The [3-D microfluidic] device really affected the inflammatory response,” Herland says. “Pericytes contributed very little in other systems, but in close contact with endothelial cells their expression of cytokines was very different.”

Three-dimensional and microfluidic models are especially useful for imaging studies to elucidate the workings of the blood-brain barrier and the roles of different cell types. Their barrier properties are typically gauged using dyes, cell morphology, or the expression of transporters and tight junction proteins. The electrical resistance across a tight junction is tough to determine in many 3-D cultures, however, making static 2-D cultures the better choice for studying whether a small molecule can cross the barrier.

The small scale and high cost of 3-D and microfluidic devices, combined with the expertise needed to assemble them in the lab, pose additional constraints. For drug screening and other high-throughput applications—the most common use of in vitro models—static cultures will probably continue to be the gold standard, Searson says. “The objective there is not to mimic the original tissue as closely as possible, but to replicate one aspect of function that can be used for high-throughput measurements.”

Picking the best model for your work 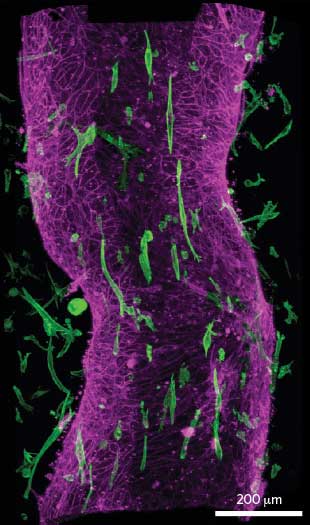 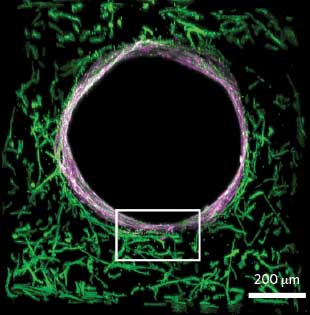 MICROFLUIDIC MODEL: Confocal micrographs depicting top-down and cross-sectional views of a chip made from endothelial cells (pink) surrounded by a gel containing astrocytes (green)PLOS ONE, doi:10.1371/journal.pone.0150360, 2016Even among standard static culture models, researchers rely on many different configurations of cells. Monocultures of endothelial cells, co-cultures with astrocytes and endothelial cells, and triple cultures that also include pericytes are all widely used. Choosing the right one depends on how the drug molecule being studied interacts with different cell types, Brodin says.

Getting started with a single cell type in a static culture doesn’t require any special expertise beyond cell culture techniques. Microfluidic models are trickier, however. For now, only one microfluidic model is commercially available, manufactured by Alabama-based SynVivo. (Cost runs from $990–$2460 for a pack of 10, not including cells, media, and matrix. The company also sells single chips for $99–$129, but that doesn’t include tubing, needles, etc., and one chip may not suffice for an experiment.) But most researchers build their own lab-made devices, and concur that if an experiment requires more-complex barrier models, such as triple co-cultures or microfluidic devices, it’s best to reach out to laboratories that have the experience doing this. “We’re seeing an explosion of diverse new devices, designed depending on individual lab teams and their needs,” Deli says.

Jyoti Madhusoodanan is a freelance writer based in San Jose, California.