MIXING IT UP: The bacterium Streptomyces coelicolor produces a variety of novel compounds when grown in combination with other bacterial species, and these interspecies interactions result in differences in colony development and pigment production when viewed under a microscope.mBio, doi:10.1128/mBio.00459-13, 2013

Antibiotic resistance is a major threat to global health, and researchers have struggled to identify new antimicrobial compounds. By the late 1990s, the bacterial reservoirs from which almost all clinically useful antibiotics had sprung appeared to run dry. As bacterial genome sequencing became more widespread in the last decade, however, researchers discovered many potential sources of new drugs hidden in these genomes. Now they just need to learn how to mine them.

Most antibiotics are derived from small molecules produced by bacteria, and the genes that synthesize, regulate, and export these molecules typically occur together in groups called biosynthetic gene clusters, which range in size from just...

Bioinformatic tools can now identify many silent biosynthetic gene clusters in bacterial genomes. The next step is figuring out how to activate them. “That would profoundly change natural product discovery, and also drug discovery,” says Seyedsayamdost. Researchers have tried many approaches, such as expressing these gene clusters in other bacterial species, modifying their promoters or regulators, and changing how the bacteria are cultured. “Many of these strategies are not scalable or generally applicable,” says Huimin Zhao, a professor of chemical and biomolecular engineering at the University of Illinois at Urbana-Champaign. “There’s a lot of luck involved.”

But that may be changing, as more reliable and high-throughput methods to activate these clusters come online. Advances in synthetic biology, small-molecule screening, and mass spectrometry have led to promising new ways to induce gene clusters and identify their products. Some hurdles remain—scientists are still trying to develop better ways to pinpoint the clusters that will yield new and useful compounds, as well as methods to more quickly and accurately identify the molecules produced by individual clusters. In addition, the new approaches for turning on gene clusters may help elucidate how this activation is regulated.

The Scientist talked with researchers about some of these new approaches. Here’s what we learned.

Approach: Past work has shown that bacteria undergo very different physiological changes when grown in the presence of other microbes than when they’re grown by themselves. Kolter and Traxler wondered if they could harness the crosstalk between different bacterial species to activate silent gene clusters. They systematically tested this hypothesis by growing different combinations of bacteria together and using mass spectrometry to identify and compare the compounds produced. “It became very clear that many very different metabolites get made when things are grown in co-culture,” says Kolter. When they paired one species of actinobacterium (Streptomyces coelicolor) with five others, the researchers further found that the set of compounds that were produced were different for each of the five co-cultures (mBio, doi:10.1128/mBio.00459-13, 2013). “We can see a lot of interactions that lead to antibiotic biosynthesis,” says Traxler. “That suggested to us that there is still some deep potential here for drug discovery.”

Advantages: This approach is relatively simple to implement and doesn’t require any prior knowledge of the bacterial genomes. In addition, “it’s linked directly to the ecology of these organisms, and I see that as a major strength,” says Traxler. He suggests that co-cultures replicate some of the complex ecological interactions that bacteria face in their natural habitats, which might force them to activate more novel gene clusters than methods that rely only on single-species bacterial cultures. “There may be a limit to what we’re able to find in single culture, and we may only be able to cross that by going to co-culture or even in situ, to find antibiotics we may never find otherwise,” he says.

Limitations: The main drawback of the method is that it can be slow and labor-intensive, especially when trying out many different combinations of bacteria. “High-throughput for us means a hundred combinations, not hundreds of thousands or millions of combinations,” says Kolter. In addition, once the researchers identify interesting compounds being produced by bacteria in co-culture, they still need to comb through the bacterial genomes to try to figure out which gene clusters they came from. “We have to work backwards to identify which processes we have woken up,” says Kolter.

Looking ahead: Traxler is trying to use microfluidics to make this approach higher-throughput, and hopes to eventually test tens of thousands of combinations using this setup. He is also planning to go from looking at simple binary interactions to looking at more-complex interactions in natural settings.

How to use: “It’s pretty cheap and easy to do this,” says Traxler. Just set up your co-cultures and watch them grow.

ELICiTING A SIGNAL: Researchers insert a reporter gene inside a silent gene cluster of interest (white arrows), then screen a small-molecule library for signals that can turn on the cluster (colored arrows). When this approach was used in Burkholderia thailandensis, the antibiotic trimethoprim was found to activate the silent gene cluster that produces the cytotoxin malleilactone B.FEMS Microbiology Reviews, doi:10.1093/femsre/fuw035, 2016

Approach: Seyedsayamdost and his team postulated that certain natural compounds turn on biosynthetic gene clusters, so they developed a high-throughput screen to search out these elicitor molecules. Seyedsayamdost’s group first inserts a genetic reporter, such as lacZ, into a gene cluster of interest. They then expose the bacteria to a large library of natural products and bioactive small molecules, looking for those that induce the expression of the gene cluster. The approach can pinpoint molecules that activate a specific silent gene cluster as well as global elicitors that activate many different clusters (PNAS, 111:7266-71, 2014). “Interestingly, it turned out that antibiotics in these compound libraries in many cases turn out to be the elicitors,” Seyedsayamdost says. This suggests that old antibiotics could be used to find new antibiotics.

Advantages: “One of the advantages of our method is that we can find naturally occurring inducers,” says Seyedsayamdost. Identifying global elicitors that activate many gene clusters could also help researchers identify common regulatory mechanisms that could be deployed to activate silent clusters. In addition, the approach can be used to screen tens of thousands of small-molecule elicitors at the same time.

Limitations: The main challenge of the system lies in genetically modifying the bacteria with a suitable reporter, which can be difficult and time-consuming depending on the species. Seyedsayamdost has successfully applied the technique to the gram-negative soil bacterium Burkholderia thailandensis, but getting it to work in less genetically tractable species will require more time and effort, he says.

Looking ahead: Seyedsayamdost is expanding the technique to different bacterial species. “We’re now getting it to work in Actinomycetes, which are responsible for many antibiotics,” says Seyedsayamdost. In organisms where it’s difficult to insert a genetic reporter, he envisions using mass spectrometry as a readout for bacterially produced small molecules. He is also trying to use more than one reporter to simultaneously assay multiple gene clusters, and eventually hopes to use RNA-seq to monitor an elicitor’s effects on an organism’s entire transcriptome.

How to use: The approach involves standard microbiology and genetics techniques. The main expense comes from the small-molecule screening. “Each screen may cost something like $500 to $5000 with a 5,000- to 10,000-compound library,” says Seyedsayamdost. “For the amount of data you get, it’s actually fairly affordable. Once the screen is done, you’re off to the races.” 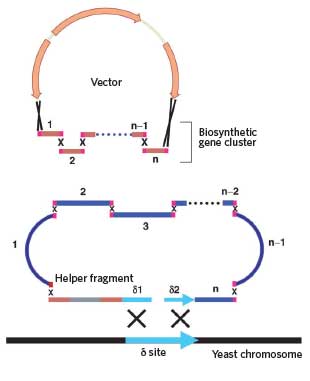 EASY ASSEMBLY: A silent biosynthetic gene cluster of interest (genes 1 to n) is reconstructed in a vector (orange, top) and integrated into a yeast chromosome through recombination at the d site (bottom). The assembled biosynthetic cluster can then be isolated from yeast and transferred into a heterologous host, where it is expressed and its products analyzed by mass spectrometry and nuclear magnetic resonance spectroscopy.Adapted from Nucleic Acids Res, doi:10.1093/nar/gkn991, 2009Investigator: Huimin Zhao, Professor, Department of Chemical and Biomolecular Engineering, University of Illinois at Urbana-Champaign

Approach: Zhao’s team uses bioinformatics to home in on a gene cluster’s structural genes—those that don’t encode regulatory proteins but are instead directly involved in the synthesis of the compound. The researchers then either amplify these genes using PCR or synthesize them anew. They clone these genes into a previously developed plug-and-play scaffold with standardized promoters for expressing biosynthetic pathway genes (Nucleic Acids Res, doi:10.1093/nar/gkn991, 2009; Mol Biosyst, 7:1056-59, 2011). Finally, they express the genes in a nonnative, or heterologous, host. “The whole idea is to basically rebuild the pathway from scratch,” Zhao says. The researchers used this method to activate a silent biosynthetic gene cluster from Streptomyces griseus and identify potential antibiotic compounds (Nat Commun, 4:2894, 2013).

Advantages: By focusing on the structural genes from the biosynthetic cluster, Zhao’s approach aims to circumvent the expression of any regulatory genes that might repress the gene cluster. Using well-characterized and standardized promoters and heterologous hosts, the technique also reduces the number of variables that researchers need to troubleshoot in order to activate a particular cluster. The method also makes it easy to delete or alter specific genes in a cluster; by deleting different genes, Zhao was able to dissect the individual steps of a Streptomyces biosynthetic pathway. By tweaking the scaffold and changing the heterologous host used, the technique could be extended to other species of bacteria and eukaryotes. “You cannot just work on one organism; you have to work on many different ones,” Zhao says.

Limitations: Gene clusters from some bacteria, such as Streptomyces, can be hard to amplify using PCR. Synthesizing the gene cluster is an alternative, but could get expensive if the cluster has a lot of genes. In addition, the host used may lack some of the precursors necessary to create the final product of the cluster.

Looking ahead: Zhao’s eventual goal is to automate the synthetic expression of silent gene clusters. “In order to make an impact, we have to scale up the process,” he says. “Given the recent progress, I’m very optimistic.”

How to use: The protocols used in Zhao’s technique have been published and all the necessary tools are commercially available. “[Researchers] just need to follow the protocols, they’re all very straightforward,” he says. He estimates that it should cost a few hundred dollars to synthetically construct and express a particular gene cluster.