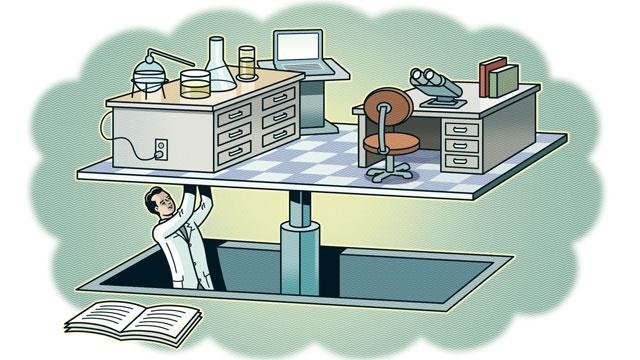 © PETER HOEYWith NIH funding fewer than 20% of the research grant applications received in 2011 (the most recent data available) and little hope for improvement in the coming year, researchers must squeeze what they can from every dollar. For some cash-strapped labs, that means buying used instruments instead of new, keeping equipment running long past its warranty, and jerry-rigging existing lab gadgets that might otherwise be scrapped.

When such equipment inevitably fails, it puts yet another strain on already tight budgets. Researchers facing service calls costing hundreds of dollars an hour may feel obliged to delay repairs, only to find that a service tech may not be readily available. Even in the lab, time is money.

There is an alternative. Lab workers armed with a bit of mechanical know-how and some basic tools can sometimes tackle repairs and problems themselves. Not every repair can or should be...

Like cars and computers, laboratory equipment almost always comes with a manual (either printed or as a PDF). And, as with cars and computers, researchers often toss those manuals in the trash or “file” them in a drawer. Here’s a better idea: as they say on the interwebz, RTFM. Manuals outline recommended maintenance and cleaning schedules, provide troubleshooting tips, and demystify error codes. (Lane Smith, President and Senior Engineer at Phoenix Technical Services, an equipment repair company that serves the University of Mississippi, suggests storing manuals together in a safe place, or as PDFs in a common folder on a lab computer, for easy retrieval.)

The maintenance suggestions these manuals lay out may surprise you. Rebecca Wood, co-owner and vice president of Southern Medical Services, a medical and lab equipment repair firm that serves south Texas, notes, for instance, that some vacuum pump manufacturers specify in their manuals that vacuum oil should be changed after every use. Yet many researchers reuse the oil until it gets dirty—a practice that could potentially cost the lab big bucks. “If you had a vacuum pump that quit and you sent it in for repair and it had black gunk in the oil, they would say you’d voided your warranty,” Wood says.

2. Clean up once in a while

An ounce of prevention is worth a pound of cure, they say, and that’s certainly true in the lab. Dust accumulates on computer parts, ice accretes inside freezers, and carbon dust builds up inside centrifuges and stir plates. Taking care of these issues before they become problems can save a lab some money in the long run. “If you use a [centrifuge] rotor, make sure it’s cleaned afterwards,” says Craig Folkman, a field service engineer at BioNiQuest Lab Services in Danville, Calif. “Make sure O-rings aren’t cracked, and change them as necessary. If there’s a spill, clean it up, don’t let it sit there.”

For mechanical devices that use brush-based (as opposed to induction) motors, such as vortexers and microcentrifuges, Smith recommends investing in a small vacuum cleaner to clean out the carbon dust. (Smith notes that replacing a worn set of motor brushes is a relatively simple task that researchers can do themselves. For one of his techs to make a lab call would cost $200 for an hour of labor plus the brushes ($20–$50 for a set), not to mention travel time.)

Invest in a can of compressed air to clean computer fans and cables, or tracks on liquid handlers. And clean the air filters on lab freezers regularly (they are usually easily accessible on the front of the instrument). “These are fairly expensive pieces of equipment, and some scientists will have their entire research life in these things,” Smith observes. Cleaning or replacing the filters will keep the compressor working properly and prevent it from overheating.

Another easy bit of maintenance: Defrost freezers regularly. “Try to do it once a year, because you will either do it on your own schedule or on the instrument’s—at 2 a.m. on a Sunday morning.”

“My feeling about lab repairs is really trying to avoid them,” says Tim Hunter, Director of the Advanced Genome Technologies Core at the University of Vermont. Hunter recommends lab managers ensure that each piece of equipment be kept on a routine maintenance schedule (often outlined in the operator’s manual).

For instance, in his facility, one worker’s job includes tracking the background signal in the lab’s real-time PCR machine, to make sure the instrument is operating correctly. Another bleaches fluid lines in the array reader between runs to minimize cross-contamination concerns.

Another commonly overlooked task, Hunter says, is defragmenting the computer hard drives attached to lab equipment. Hunter suggests doing that monthly. “[These are] things that people take for granted and just don’t check, but [that] can really impact things when you least suspect them.”

Wood recommends copying and laminating the schedule for each piece of equipment and affixing it on or near the machine, so that everyone in the lab knows what needs to be done, and when.

Other items you might want to have on hand are lubricants (e.g., oil or WD-40), compressed air, a set of American and metric Allen and socket wrenches, a drill, and electrical tape.

When something goes wrong, the most obvious solution sometimes is the right one. So, if a piece of equipment suddenly stops working, make sure it actually is plugged in and that the outlet is working; even in the lab, plugs come loose, fuses blow, and circuit breakers trip unexpectedly.

Smith recommends doing a quick and commonsense “self-assessment.” For instance, if the −80 °C freezer is suddenly warming up, did anyone recently perform an inventory during which it was left open? Ditto for the cell culture CO2 incubator.

Next, see if restarting the instrument and/or attached computer solves the problem. Or, if it is a mechanical device, see if you can identify something obvious, such as dirt in a track or hinge, which might be causing the malfunction.

If the problem persists, write down any error codes or messages you see, as well as what you were doing when the problem occurred. For instance, if an autoclave stops working, where in the cycle did it halt? Also, see if you can figure out where in the instrument the problem is occurring. “The easiest thing to do when troubleshooting is to cut your problem in half,” says Folkman. For instance, suppose your HPLC isn’t working; see if you can determine whether the blockage appears to be between the buffer reservoirs and the pump, between the pump and the column, or in the fraction collector.

Even if you end up having to call in a repairperson, such information can save time (and thus money). “If you have an error message, instead of saying ‘I’m getting this diagnostic [code],’ if you can say ‘I tried this or that,’ that makes it easier for us. . . . We can know exactly what the issue is.”

If you do decide to open up an instrument to attempt a fix, Smith recommends following the physicians’ creed: First, do no harm. Put another way, make sure you can put back together that which you have taken apart.

Use a cellphone camera to take pictures of wires and instrument settings so you know where they go and how they were arranged. Moses suggests using a piece of white paper, marked to indicate the front and back of the instrument, and taping screws on the paper in approximately the positions from which those screws came, “so you know more or less how it goes back together.” (Oftentimes, instruments may use different screws in different positions, so this kind of information can be invaluable.)

To do no harm also means to protect yourself, says Moses. That means powering down and unplugging equipment before opening it, and putting your left hand behind your back before plugging it back in and turning it back on. That latter point, he says, is an “old electrician’s trick” that “helps prevent shocking your heart should your repair leave a loose wire inside the machine.”

Deciding what can and cannot be repaired in the lab must obviously be done on a case-by-case basis. But as a general rule of thumb, repairs that are covered in an instrument manual’s troubleshooting section can probably be attempted in the lab, such as changing the bulbs on a spectrophotometer or replacing the brushes on a microcentrifuge. Instruments like stir plates are easily fixed, says Moses—often a drop of oil at the point where the motor shaft emerges from the motor, called the bushing, is all it takes.

Instruments that are under warranty or service contract probably should not be repaired in-house, as doing so might void the warranty. Very heavy equipment, very expensive equipment, equipment with precise tolerances (such as a microscope), or equipment involving high voltages, lasers, and so on, probably should be left to experts as well. So should equipment with obvious charring or burning, Moses says, as these might require special expertise in measuring and monitoring electrical circuits.

7. Know when to call for help

When in doubt, it never hurts to call the manufacturer or a third-party repair company. Smith says his company will often offer advice gratis over the phone, and so will most instrument vendors. “I have rarely come across a manufacturer that will not answer simple questions on the phone,” he says.

In some cases, you can purchase a part, like a hinge or a circuit board, and have technical support walk you through the installation process. But make sure the repair doesn’t cost as much or more than buying new. Moses recommends checking the manufacture date on equipment to see how old it is (and thus, if it makes sense to repair it). Circuit boards and electrical components often contain a four-digit code in the form YYWW. For instance, 9613 means the component was built in the thirteenth week of 1996; 0744 means the forty-fourth week of 2007. Though such information will not give a precise manufacturing date, an instrument obviously must be at least as new as its newest component.

But before you do anything, see if you cannot at least identify what is wrong before calling in an expert. By figuring that out you can give the technician the most accurate information, thereby saving him time and you money. Just as practically, you can learn what to do differently moving forward.

“By opening [up a piece of equipment] you can be aware of what happened and what not to do in the future. We don’t want this to happen again,” Moses says. 