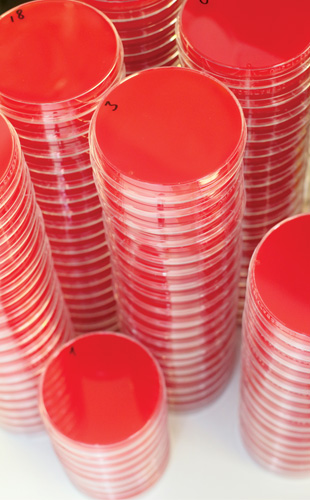 BLOODY COUNTING: A stack of Silvio Brugger’s blood agar plates for growing bacterial colonies.PHOTO BY PASCAL M. FREY/COURTESY OF SILVIO BRUGGERWhile studying bacterial resistance to penicillin in medical school, Silvio Brugger was horrified to discover that he and a colleague would have to count colonies growing on 100 or so petri dishes every day. He thought, “Oh my God, I cannot do this,” says Brugger, now working at the University of Bern in Switzerland. “It was quite painful.”

Brugger is hardly alone: if you want to know how many bacteria or viruses you have, the standard method is to plate serial dilutions and count the resulting colonies or plaques. While some scientists may not mind the repetitive activity—“I don’t find it too bad,” says virologist Vincent Racaniello of Columbia University in New York—others find the work incredibly tedious. Yet tallying each speck by hand remains the technique...

However, scientists faced with towers of hundreds or thousands of plates can get overwhelmed if counting by hand. To help, the latest automated counters have high-res color cameras and multiple lighting options to identify spots barely visible to the naked eye. Advanced systems offer an array of features, such as the ability to read barcode labels on plates, calculate the number of colony-forming units spread by a spiral plater, or measure zones of inhibition, to name a few.

Brugger, on the other hand, built his own colony counter for his current work studying the capsule of pneumococcus (PLOS ONE, 7:e33695, 2012). The DIY option may provide an affordable alternative to costly commercial systems for medium-throughput counting.

Here, The Scientist profiles tools and tips for colony counting, whether you have a few plates or a whole incubator full.

One If By Hand 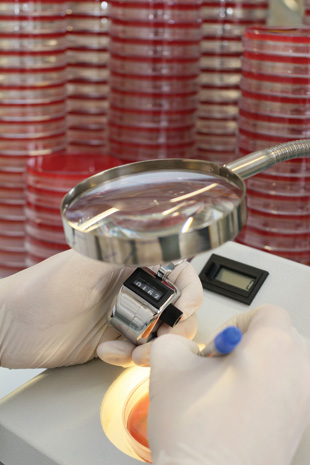 THE MANUAL METHOD: Many researchers use a magnifying glass or a simple stereo microscope, a clicker-counter, and a Sharpie pen for a low-tech, but time-intensive solution.PHOTO BY PASCAL M. FREY/COURTESY OF SILVIO BRUGGERAt its most basic level, counting colonies or plaques is as easy as 1, 2, 3. Many scientists use a marker like a Sharpie ($2.99 for two) to mark each spot on the plate as they do the tally, so as not to double-count. Racaniello keeps count in his head, but many researchers prefer to use a handheld clicker ($13 or so) as they mark. Setting the plate on a light box ($100–$250) may make it easier to see the spots.

Cole-Parmer of Vernon Hills, Illinois, sells a digital counter pen that senses the pressure on the dish with each mark you make, beeps, and records the score ($21). However, users complain the ink dries up quickly. Similarly, the SC6PLUS from Bibby Scientific Ltd. in Staffordshire, U.K., is a plate holder that senses your marker’s pressure. It has a built-in magnifying glass and can also calculate an average tally ($640). IUL Instruments, S.A., based in Barcelona, Spain, makes a similar colony counter system ($900–$2,200 from the US distributor, Neu-Tec Group, Inc).

Throughput: Counting by hand works fine for basic researchers who don’t have too many plates. Brugger estimates it takes up to half a day to go through 100 85-millimeter petri dishes with 30–300 bacterial colonies each. For virus counting, Racaniello reports that 100 6-well plates with 10–100 plaques per well take an hour or two.

Accuracy: “It’s as good as whoever is doing it,” says Elizabeth Murphy, a product manager at Cole-Parmer. Racaniello suspects that different researchers would probably come within a few plaques of each other. By counting each plate three times, he feels his results are reliable.

Cons:
• Tedious
• Open to human error, both in counting and transcribing data into a computer
• Spending hours hunched over plates full of bacteria could cause eyestrain.
And breathing the air around such samples might not be healthy, Murphy suggests.

Tips:
• For plates crowded with more than 200 colonies, you can divide the area into sectors—
such as quarters or eighths—count one sector and use that figure to estimate the total.
“It saves you a lot of time, but it’s not very accurate,” Brugger cautions.
• For consistency, one person should count all the plates, says Ajit Mahapatra of Fort Valley
State University in Georgia. A second counter on the plate set can increase reliability.

Scientists in Mahapatra’s lab now use an automatic colony counter. These range from simple models to fancy machines with built-in analysis options and the ability to count both microbial colonies and viral plaques.

Basic: One straightforward, affordable starter option is the aCOLyte 3 from Synbiosis ($4,188.89 including the machine and software). It identifies colonies or plaques as small as 0.3 mm across and adds up the total for you. IUL’s Flash & Go ($9,000), which Mahapatra uses in his research on eliminating bacterial contamination of foods, offers similar basic counting capabilities. These systems don’t have a lot of additional functions; they just count spots.

SPOTTING DOTS: Barcelona-based IUL Instruments’ Flash & Go (pictured on the right) identifies colonies and plaques as small as 0.06 mm. It weighs about 10 pounds and comes with FDA-compliant software. Fort Valley University’s Ajit Mahapatra and his assistant Donna Harris (left) use the machine to count E. coli colonies for their research on food and agricultural engineering.COURTESY OF AJIT MAHAPATRA; IUL S.A.

Advanced: Other counters do much more than enumerate colonies and plaques. For example, Synbiosis offers an advanced machine, the Protocol 3 ($10,988.89; $14,500 with a touch-screen computer), that can also provide data on the size or shape of your spots, or measure zones of inhibition, with the included software. With additional, optional software modules, the ProtoCOL 3 can perform even more tasks. For example, it can count and calculate concentrations of spiral-plated colonies or analyze plates that use the Ames test—identifying carcinogenic compounds by measuring the rate at which histidine-dependent bacteria mutate and acquire the ability to grow on histidine-free media ($942.86 for each of these additional software plugins).

The ProtoCOL 3, with a scientific-grade camera, spots colonies as small as 43 microns—“just barely” visible to the eye, says Smith. Many other advanced counters can also identify dots in the sub–100-micron range.

Those who need more than just counts can also get an upgraded system from IUL, called Flash & Grow, starting at $17,000, which includes features such as color and size differentiation, and other software modules. For example, you can add zone-of-inhibition measurements, to test antibiotic drugs, for about $4,000.

Most advanced systems use color cameras, allowing users to distinguish colonies of different hues. The ColonyDoc-It Imaging Station from UVP, LLC of Upland, California ($6,900) can also identify colonies expressing green fluorescent protein using an add-on emission filter ($800). Both the ColonyDoc-It and the ProtoCOL3 have doors to shield plates from ambient light, ensuring even illumination of the images.

Throughput: Automatic counters enable high-throughput counting of hundreds or thousands of plates. Pharmaceutical companies as well as water- and food-safety labs would likely find them useful, says Smith. When Mahapatra timed manual counting, it took an average of 73 seconds per plate, he says, compared to a second or two with the Flash & Go. For those with truly high-throughput needs, IUL offers a companion plate handler for the Flash & Grow, which robotically feeds a stack of up to 80 plates into the imager ($60,000, including the imager and software).

Accuracy: It’s pretty good. Mahapatra compared the Flash & Go to counting by hand when he first got the machine, and says the imager was quite accurate. It came up with the same tally several times on the same plate, and correlated well with manual counts (Agricultural Engineering International: the CIGR Ejournal, 11:MS1368, 2009). He feels more confident of his results using the automatic system.

Pros:
• Fast
• No transcribing errors, and there’s a data trail of who performed the counting when.
• Built-in analysis for a variety of assays

Cons:
• Expensive
• Funny-shaped or close-together colonies, mold or debris, writing on the plate,
or bubbles in the agar may interfere with an accurate count and require user correction.
• Since the software is proprietary, you can’t customize it if the commercial version
doesn’t fit your needs.

Tips:
• Each lab should validate the instrument and its counts as compared to their usual
method, says Smith.
• Keep the bottom of the plate free of writing and smudges. Instead, label the plate lid or side.

DIY AUTOMATION: The hardware setup of Kevin Claytor’s apparatus is shown here (left). The webcam is clipped to the holder on the top of the box (middle panel, left). The sample sits on the diffuser in the center of the box, and the lamp is placed so the bulb is below the sample (bottom panel).KEVIN CLAYTOR, UIUC.Brugger wasn’t aware of commercial systems when he decided that crafting an automatic counter would be a fun project for his lab. The team built an aluminum apparatus, with a 3.3 megapixel camera mounted above a drawer that holds the petri dish, and a circular light source surrounding the dish. The Brugger group spent nearly $8,000, but you could choose a cheaper camera or lighting, he says. To identify circular spots, they wrote MATLAB software, now freely available online (www.coccus.eu). The smallest spots Brugger has tried are Moraxella catarrhalis colonies of 1–3 millimeters.

Like Brugger, Kevin Claytor wasn’t happy with the prospect of counting bacterial colonies by hand when, as a Rice University student, he spent the summer of 2008 in a Research Experience for Undergraduates program at the University of Illinois in Urbana-Champaign. Playing with a webcam at home, Claytor thought, why not use it for his experiments? He built his apparatus out of a cardboard box, 15-watt light bulb, and high-res webcam for about $50 (physics.illinois.edu/undergrad/reu/2008/Claytor_Kevin.pdf). “Most of the difficulty is the software,” says Claytor, now a physics graduate student at Duke University in Durham, North Carolina. He used MATLAB to program the software for the counter, which he has made available for free (people.duke.edu/~kec30/colony.html). While Claytor designed his system for bacterial colonies, it should be adaptable for viral plaques too, he thinks. The program provides spot count as well as statistics such as average size and shape symmetry.

The DIY option is not necessarily limited to MATLAB aficionados, Claytor notes, because image-processing software is freely available online. For example, Anne Carpenter at the Broad Institute in Cambridge, Massachusetts, codeveloped an image-analysis program called CellProfiler (BioTechniques, 42:71-75, 2007). “It’s designed for biologists,” she says. “You don’t need to adapt the code yourself, you just play around with different settings.” With CellProfiler, you could count spots or measure zones of inhibition, and train the program to ignore artifacts such as bubbles. You could use a digital camera or a flatbed scanner to make the images for less than $100, she suggests.

Throughput: Homemade counters fill the space between small-scale figuring by hand and large-scale, commercial tallies, Claytor says. Brugger’s lab might have 100 or 200 plates to count from time to time. He estimates his system takes up to 20 seconds to count a dish, depending on the number of colonies present, so it could easily complete 100 plates within an hour. Claytor’s took fewer than 10 seconds to count a plate.

Accuracy: Brugger’s system offers better accuracy than manual counting, he found, particularly for plates with hundreds of colonies. Claytor, in his summer project, reached an accuracy of 93 percent compared to the by-hand tally. Some spot-identifying algorithms work better than others, he notes.

Pros:
• Inexpensive
• Open-source code means you can modify the program to fit your experiments.

Cons:
• Limited features
• You may have to update the software yourself if you upgrade your computer or camera.

Tips:
• “The most important thing is to get the illumination of the plate right,” Carpenter says.
You want even lightwith minimal shadows. Brugger applied indirect “dark-field” blue light
from the sides of his apparatus to help distinguish colonies on dark, blood-containing agar.
• Keep a consistent distance between the sample and the camera so the resolution is the same
in all pictures.
• “You should shoot for each colony, or each ‘blob of interest,’ being at least five pixels across
in the final image,” Carpenter says. “Any less than that, it gets hard to distinguish two little colonies
side by side.” Ten pixels across would be even better, she says.