PROMISING PAIRS: An NMR screen for inhibitors of the cell cycle regulator p27Kip1 yielded a number of hits, which clustered into two groups that bind to different parts of the protein. Here are representative small molecules that bind to the two different regions. The colors of the polygons reflect the binding site characteristics favored by inhibitors (blue, electropositive; red, electronegative; gold, hydrophobic; yellow, van der Waal) and the polygons’ sizes indicate the favorability of the contact interaction.SCI REP, 5:15686, 2015

Scientists know a lot about drugs for proteins that settle down into nice, stable conformations and stick with them. Not so for the set known as intrinsically disordered proteins, or IDPs. Their amino acid chains rapidly cycle between multiple conformations, sometimes within microseconds. They’re continually striking different poses, like a nanoscopic, superspeed version of Madonna in her music video “Vogue.”

As many as one-third to one-half...

“There’s hundreds [of IDPs] that we would like to drug, and we just don’t yet know how to do it,” says Richard Kriwacki of St. Jude Children’s Research Hospital in Memphis, Tennessee.

But he and others think it’s worth a shot. Small molecules might, theoretically, nip into a transient binding pocket, stabilize IDPs, and limit their range of possible poses. Or drugs could, perhaps, hover at the edges of the rapidly swirling peptide structures to shut IDPs down. The challenge is to identify or design those small molecules, which will likely bind only weakly to their fluctuating protein targets.

As things stand, drugs that target the so-called “dark proteome” are a future prospect. For now, scientists are conducting proof-of-principle studies that show they can observe that binding, and that such IDP-aimed drugs might be possible. Here, The Scientist profiles five approaches to drug the disorderome.

Kriwacki used nuclear magnetic resonance (NMR) spectroscopy to hunt for inhibitors of the cell cycle regulator p27Kip1. He and his colleagues first got interested in the protein because it’s highly expressed in inner-ear hair cells, preventing them from regenerating in people who’ve lost hearing due to loud noises or chemotherapy treatment. The protein is also involved in diabetes, obesity, and breast cancer.

Kriwacki’s team performed a fragment screen, looking for drug-like moieties that might bind to p27Kip1. (See “Piece By Piece,” The Scientist, June 2013.) But a standard 1,100-fragment library yielded only two hits, and Kriwacki suspected the usual-size fragments were simply too small to grab onto the flapping IDP. The key to success, he says, was creation of a specialized library, with fragments a bit larger. After screening a further 1,222 compounds from that library for interactions with p27Kip1, the researchers identified seven more hits. By computationally modeling those molecules and their interactions with the target p27Kip1, they found characteristics that allowed them to identify other possible interactors, which they confirmed with NMR. That brought the total number of hits to 36.

The researchers tested one of their hits using in vitro functional assays, and showed it was able to partially disengage p27Kip1 from its cellular target, Cdk2/cyclin A—a displacement that activated the kinase. Theoretically, in a cell, this activation would lead to cell cycle progression (Sci Rep, 5:15686, 2015).

“The affinity is super-low; it’s really just a proof-of-principle experiment,” says Kriwacki. By synthesizing larger second- and third-generation compounds, he says, the team is already seeing higher affinity of the small molecules for the IDP. Kriwacki says these compounds bind p27Kip1 by a novel mechanism he expects to publish soon.

Con
• The method is expensive and time-consuming; Kriwacki estimates the team used a month or more of continuous NMR time.

To find a drug, one first needs a drug pocket, reasons Lisa McConlogue of the University of California and the Gladstone Institutes in San Francisco. She and her colleagues designed and tested the predictions of a computational screen to find potential pockets in α-synuclein, a protein that aggregates in Parkinson’s disease (PLOS ONE, 9:e87133, 2014). 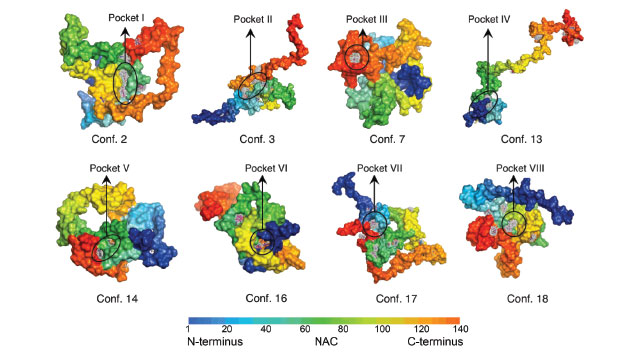 The team started with a set of 40,000 theoretically possible α-synuclein conformations, based on NMR constraints for the protein’s disordered ensemble. They picked 22 of them, mostly compact ones they figured were likely to contain a good binding pocket. Then, they used a computer algorithm to predict how various fragments of drug-like molecules might interact with the surfaces of these structures. Based on that information, the researchers identified eight potential binding sites where fragments were most likely to latch on. Using those sites as binding pockets, they then computationally attempted to dock 33,000 small molecules into those spots. This yielded 89 hits.

The authors selected one compound, ELN484228, for further experiments. Overexpression of α-synuclein is known to interfere with phagocytosis, and ELN484228 fixed this defect in cultured cells. It also protected cultured brain cells from the neurotoxic effect of mutant α-synuclein. It’s still not clear what ELN484228 is doing to α-synuclein; McConlogue suspects it may bind to beneficial conformations, promoting the protein’s healthy activity.

Con
• Computational screens are risky, says first author Gergely Tóth of the Hungarian Academy of Sciences in Budapest and the University of Cambridge in the U.K. They may yield false results that don’t hold true in real-world studies.

Tóth, Eckard Mandelkow of DZNE in Bonn, Germany, McConlogue and colleagues used a physical binding screen to look for small molecules that interact with tau, which aggregates in Alzheimer’s and related conditions (Curr Alzheimer Res, 12:814-28, 2015).

In collaboration with Graffinity Pharmaceuticals, now part of NovAliX in Heidelberg, Germany, the researchers began with Graffinity’s in-house library of 110,000 small drug-like compounds. They attached these to microarrays, then used surface plasmon resonance (SPR) imaging to determine which were bound by tau protein. SPR uses the angle of light reflected by an array of molecules to detect the increase in mass when one of those molecules is bound by one of another set of molecules, floated over the array in liquid.

This protocol flipped the typical SPR method, in which the proteins are immobilized on the array and the small molecules are flowed over them. The traditional technique wouldn’t work for IDPs, Tóth reasoned, because the binding of small molecules would be so weak, it wouldn’t change the resonance signal of the large protein. But with the small chemicals immobilized, even weak binding by a large tau protein changed their physical characteristics enough to register. Plus, that way the IDP tau was unbound, and so sure to be in its native conformation. Placing many drug-like molecules in the array was the only way to perform a high-throughput SPR screen, adds McConlogue.

The scan yielded 834 hits. Of these, the team tested 70 for impact on tau aggregation. The authors were pleasantly surprised to see that, in cultured cells, at least two-thirds of the compounds blocked tau aggregation to some extent, and three molecules the authors investigated in more detail did so in a dose-dependent manner. Tóth suspects they bind and stabilize the protein monomer. He is now CEO of Sunnyvale, California–based Cantabio Pharmaceuticals, a company using these techniques to identify small molecules that act as “chaperones” to stabilize IDPs and other proteins involved in neurodegeneration.

Con
• Compounds that bind under microarray conditions, immobilized on a surface, may not do so in other circumstances.

The protein tyrosine phosphatase PTP1B used to be considered undruggable, says Navasona Krishnan, a research investigator in the Nicholas Tonks lab at Cold Spring Harbor Laboratory in New York. Pharmaceutical experts would love to inhibit it, anticipating treatments for diabetes and obesity as well as breast cancer. But scientists have struggled to slide a small molecule into the highly charged active site. The resultant drug candidates tend to be poor at entering cells, or at reaching target tissues when administered orally.

So Krishnan and Tonks went looking for an allosteric inhibitor, which would deactivate the enzyme by binding outside the active site and altering its conformation. They found it in an appetite suppressant called MSI-1436 (trodusquemine). Krishnan and his colleagues tried, and failed, to obtain a crystal structure of the protein’s regulatory carboxyl terminus, where MSI-1436 binds. What was the problem? NMR confirmed that the binding site was intrinsically disordered.

MSI-1436, the researchers discovered, binds to a short helix that only forms when the compound is present. This helix migrates to the backside of the catalytic domain and recruits a second MSI-1436 molecule to that spot. The pair hold the enzyme in an open conformation, so it can’t dephosphorylate its substrates (Nat Chem Biol, 10:558-66, 2014). In mouse models of breast cancer, MSI-1436 prevented tumor growth and metastasis; it’s already in a Phase 1 clinical trial for breast cancer. It crosses cell membranes, and while it’s not orally bioavailable, the scientists have made analogs that are, says Krishnan.

Con
• When working with IDPs, scientists must check that their compound is selective for the target protein, since there will be other IDPs about in the cell, cautions Krishnan.

While many scientists aim to bind IDPs with small molecules, Michele Vendruscolo of the University of Cambridge has developed a way to engineer large antibody binders that might serve in research or the clinic. 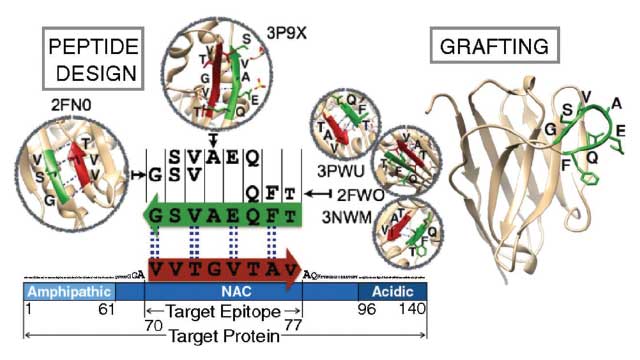 PATCHWORK ANTIBODIES: To make an antibody against this particular epitope of the α-synuclein protein, a computer program overlapped short amino-acid sequences from three different kinds of proteins in the Protein Data Bank. Then, scientists fit the genetic code for that amino-acid sequence into the gene for an antibody, resulting in one that should bind α-synuclein at that site.PNAS, 112:9902-07, 2015

It can be difficult to generate antibodies to IDPs using standard methods, so Vendruscolo’s team came up with an in silico technique (PNAS, 112:9902-07, 2015). The procedure starts with a desired epitope of eight residues. Then, the researchers seek strings of amino acids that would likely bind to that epitope. As candidates for those amino acid strings, they cull peptide sequences from the Protein Data Bank, picking any short peptides known to interact with at least three residues of the target epitope. The computer program then combines those snippets to build up larger peptides, which ought to cover the entire epitope.

All the scientists have to do then is clone a stretch of DNA for that peptide into the third variable complementarity-determining region (CDR) of an antibody heavy chain. The antibody they chose as the scaffold was one that’s easy to purify from bacteria and known to function well despite insertions into that variable portion. The authors call the resulting computer-designed antibodies DesAbs.

In this manner, the team made antibodies against α-synuclein, as well as against amyloid-β, which is associated with Alzheimer’s disease, and against islet amyloid polypeptide (IAPP), which is involved in diabetes. Most are weak binders to the IDP monomers, says Vendruscolo, though they are more likely to bind aggregates. He thinks these kinds of antibodies will probably find a use in diagnostic or imaging tests in the clinic, as well as in labs.

Pros
• Inexpensive
• The team can generate an antibody within a few weeks.
• Reliable; the group has tried their method on about 30 different epitopes of α-synuclein, amyloid-β, and IAPP, and it “nearly always works,” Vendruscolo says.

Cons
• The technique is new, and Vendruscolo says there’s still plenty of optimization to do.
• Antibodies are difficult to apply as treatments, because they’re large proteins. It’s hard to deliver them to the brain, for example, because they don’t naturally cross the blood-brain barrier.

Clarification (October 2): The Computer-Aided Design and Skimming the Surface sections of this article have been modified to more clearly describe the contributions of some of the collaborators in these multidisciplinary projects.