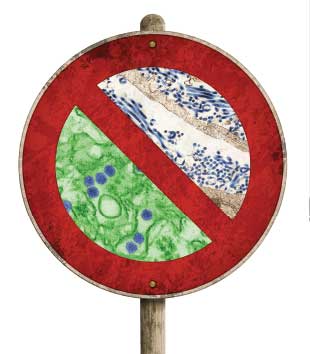 STOPPING SCOURGES: Colored transmission electron micrographs of Zika virus (blue spheres, left) and Ebola virus (blue filaments and spheres, right)COMPOSITE IMAGE: ISTOCK.COM/LOLON, NIAID, CDC/CYNTHIA GOLDSMITHEbola. Zika. Two foreign words with instant name recognition. As the extremely contagious—and highly deadly—hemorrhagic fever caused by the Ebola virus was ravaging West Africa, the more insidious Zika virus was beginning to infect people in Brazil, causing many infants whose mothers contracted the virus during pregnancy to be born with severe neurological damage. Even though the Ebola epidemic has waned, cases are still being reported. And the onset of summer in the Northern Hemisphere has brought fears of a widespread mosquito-borne Zika epidemic to a fever pitch.

These two epidemics underscore the pressing need for vaccines and other therapeutics to protect against and treat infections with viruses such as Ebola and Zika, as well as a host of other pathogens, some of...

When a disease-causing microorganism enters the human body, it first elicits an innate immune response, followed by the proliferation and differentiation of B cells that produce circulating antibodies directed at many different regions (epitopes) of the proteins on the surface of the pathogen. Later exposure to the same pathogen elicits antibody production by memory B cells. Most of the currently used vaccines work by provoking this immune reaction, known as the humoral arm of adaptive immunity.

The body also deals with intracellular pathogens by mounting a cell-mediated immune response choreographed by T cells. Unlike B cells, T cells only recognize surface antigens that have been processed and presented to them by antigen-presenting cells (APCs). Upon presentation of the antigen, T cells become cytotoxic to infected target cells, and can also release chemicals known as cytokines, which help recruit additional immune players to fight the microorganisms.

Due to the two-pronged approach that our adaptive immune system naturally takes against pathogens, researchers who want to develop vaccines or mine for vaccine targets need to investigate both the B- and T-cell responses to ensure that the vaccine will work against all the important antigens. With the recent advances in high-throughput sequencing, bioinformatics, and prediction algorithms, scientists can now determine potential vaccine antigen candidates more rapidly and efficiently.

The Scientist spoke with investigators who use high-throughput proteomic approaches and proteome databases to inform antigen selection for the development of vaccines that can generate humoral or cell-mediated responses. 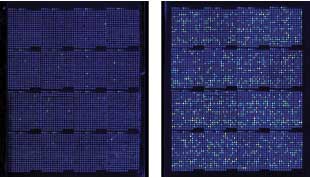 MINING FOR TARGETS: Sera from a US adult who had never been infected by malaria (left) and a naturally malaria-infected individual living in West Africa (right) were applied to microarrays expressing 4,500 proteins from the malaria parasite followed by exposure to labeled secondary antibodies. Bright spots on the array indicate antigens associated with protection.PHILIP FELGNER, UNIVERSITY OF CALIFORNIA, IRVINEHOW IT WORKS: One approach to reduce laboratory time and cost with vaccine and antigen discovery uses a high-throughput method whereby each gene in an infectious agent’s genome is amplified, cloned, and then translated into proteins using an E. coli cell-free transcription/translation system. This methodology was developed in 2005 at Antigen Discovery, Inc., a biotechnology company based in Irvine, California, and by researchers at the University of California, Irvine. It is helpful in elucidating the B-cell response to a particular pathogen.

Although this high-throughput approach was originally developed using the malaria parasite and the vaccinia virus, researchers have now employed the method to look for antigen targets for more than 30 human pathogens, including chlamydia, tuberculosis, HPV, HIV, and influenza (PNAS, 102:547-52, 2005). This approach can help scientists whittle down vaccine candidates from an organism that has thousands of proteins to a handful of potential antigens.

After the synthesis of the pathogen’s proteome, the proteins are printed onto a nitrocellulose array in a 384-well plate format. A small volume of serum (2 μL per patient) from appropriate patient cohorts can be applied to these arrays. After overnight incubation, a fluorescent secondary antibody that recognizes human antibodies is applied, and the fluorescent signals are read by a scanner (Proteomics, doi:10.1002/pmic.201500375, 2016).

This high-throughput approach can help scientists pin down what antigens are associated with protection. “If you have two populations of people—one group who is exposed and another who isn’t—you can compare the antibody responses between those two groups and look for antibodies associated with protection,” says Philip Felgner, an infectious disease specialist at UC Irvine and the founder of Antigen Discovery. (See photographs above.)

CONSIDERATIONS & GETTING STARTED: Arrays for a number of infectious diseases can be purchased through Antigen Discovery, and the cost varies based on the number of proteins printed. Many of the arrays need to returned to Antigen Discovery for scanning, because the machines used to scan these slides are no longer used in many research institutions, Felgner says.

When working with proteins that are encoded by genes that are 3,000 base pairs or longer, Felgner advises splitting the gene up into overlapping segments to maintain the high-throughput approach in synthesizing proteins.

The proteins can be printed using a microarray printer from ArrayJet: these printers do not make direct contact, precluding any damage to the nitrocellulose plate.

Although many of the arrays manufactured by Antigen Discovery need to be scanned by the company, researchers can also adapt a battery-operated ArrayCAM imager from Grace Bio-Labs (Proteomics, doi:10.1002/pmic.201500375, 2016).

HOW IT WORKS: A second high-throughput way to mine for vaccine targets is to look more specifically at the T-cell response. One approach researchers use is to print peptides based on the suggestions of epitope-prediction software. After these peptides are printed on an array, CD8+ and CD4+ T cells isolated from specific subsets of patients—for instance, those who are infected and those who are vaccinated—can be applied to the array. If the T cells are activated by a particular protein, that positive hit can be studied further for validation as a potential vaccine target. Currently, this technique is being used to mine for vaccine targets for diseases including tuberculosis, dengue, and allergies.

This T cell–based proteomic approach was first developed in 2003 using the parasite that causes malaria, Plasmodium falciparum (PNAS, 100:9952-57, 2003). Since then, the prediction algorithms for this technology have improved. “It’s basically always a feedback loop: the more peptides we test, the more data we get,” explains Daniela Weiskopf, an immunologist at the La Jolla Institute for Allergy and Immunology (LJIAI) in California. “This iterative loop feeds back to the bioinformaticians, who can better advance these algorithms.”

The peptides identified by the algorithms are then printed and used in an enzyme-linked immunospot (ELISpot) assay, manufactured by the Swedish company Mabtech. The 24-hour ELISpot assays are a sensitive way to quantify cytokine-secreting T cells. Weiskopf and her colleagues at LJIAI look at interferon-gamma levels to measure T-cell activation. If the T cells bind to a particular epitope and respond to it by secreting a cytokine, then that printed peptide could be a potential vaccine candidate. “Each cell that makes a cytokine correlates to one spot on the membrane,” explains Veronique Schulten, another LJIAI immunologist.

CONSIDERATIONS & GETTING STARTED: To generate your own array to identify T-cell targets for a particular infectious agent, start by searching the Immune Epitope Database (IEDB.org). This database can help predict if T cells might bind to specific epitopes of an infectious agent.

And because printing peptides can be expensive—synthesizing a crude peptide comprising 15 amino acids from scratch can cost anywhere from $25 to $40—you need to determine what you are interested in, Weiskopf advises. Purified peptides can run up to $300 a pop because of the additional purification steps involved. And the larger the organism, the more expensive it will be to make the peptide pools, and the more blood will be required for your assay. “Everything becomes more complicated and your needs are greater,” says Schulten.

Since the T cells used in this assay are derived from patients, make sure you are first comfortable with working with cryopreserved peripheral blood mononuclear cells (PBMC), a collection of cells from which T cells are isolated. “You need to know how to isolate, freeze, and thaw PBMCs efficiently and without killing them,” says Cecilia Lindestam, an immunologist at LJIAI.

The researchers who spoke with The Scientist about this assay also advised taking into account the toxic effects that cryopreservants, such as dimethyl sulfoxide (DMSO), could have on PBMCs. For the ELISpot assay, peptides are usually resuspended in DMSO, so an important consideration is to balance the concentration of DMSO in each well to prevent the cryopreservant from killing the cells.

HOW IT WORKS: ATLAS is a rapid, high-throughput method researchers can use to comprehensively screen every single protein in a pathogen for vaccine target discovery. ATLAS also interrogates how T cells respond to an infectious agent. Developed based on research by immunologist Darren Higgins, now at Harvard Medical School, the technology is proprietary to Cambridge, Massachusetts–based Genocea Biosciences, a biotech company cofounded by Higgins to develop vaccines and immunotherapies that elicit protective immunity via T-cell responses. The ATLAS platform has helped identify T-cell vaccines for genital herpes and pneumococcus currently in clinical trials. 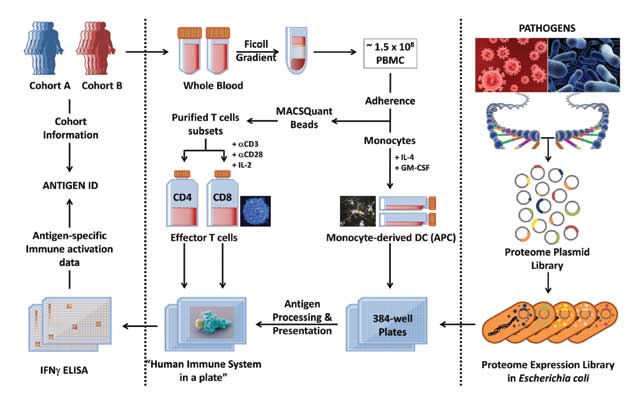 DOING WHAT COMES NATURALLY: The ATLAS technology mimics how T cells naturally respond to an infectious agent. A plasmid library prepared from the total proteome of a pathogen is expressed in E. coli and seeded into a microarray plate (right column). Whole blood from pathogen-exposed and nonexposed samples is separated into antigen-presenting cells (APCs) and T cells (middle column). APCs and T cells are applied sequentially and antigen targets are assayed using interferon gamma (IFNγ) as a measure of T-cell activation.GENOCEA BIOSCIENCES

The premise of ATLAS is to mimic the natural human immune response to protein antigens, so the assay involves antigen processing and presentation by antigen-presenting cells (APCs) and immune activation of CD4+ and CD8+ T cells.

T-cell responses are typically polyclonal, meaning that a single antigenic protein can activate T cells directed at different epitopic regions of the protein.

To identify T-cell targets using the ATLAS approach, each protein in the proteome of an infectious agent is expressed in E. coli. Each bacterial clone is then cultured in a separate well of a 384-well plate. From blood samples from human donors across a wide range of HLA types, researchers isolate nucleated cells, which contain all the immune cells the assay requires: the APCs and the T cells. After dividing the APCs and T cells into subsets, the APCs are applied to the plates with E. coli. After two hours—which gives the APCs enough time to process the bacteria—the T cells are added to the array. If a broad range of T-cell types are activated by a particular antigen expressed by the bacteria and presented to them by the APCs (a response level measured by production of interferon gamma (IFNγ) after an overnight incubation), that antigen may be a promising candidate for a vaccine.

“The core benefit of ATLAS is that we’re taking advantage of the natural propensity of APCs to do their job, which is to eat bacteria,” says Jessica Flechtner, an immunologist and chief scientific officer of Genocea.

GETTING STARTED: ATLAS is not a fee-for-service platform. Rather, the projects are set up as collaborations between researchers and the company, either through grants or as a material transfer. If researchers are interested in using this platform, they should ask themselves if T cells might be mediating an effect in the infectious disease they are studying.

Another question to consider is whether the pathogen proteome is large enough to do an unbiased screen. For instance, ATLAS might not be ideal for RNA viruses with genomes that only encode for a handful of genes. “There’s not a magic number for how many expressed genes a pathogen should have,” Flechtner says. “But when you get into tens and hundreds of expressed genes, that’s where ATLAS should be used, because that’s where our strengths lie: to be comprehensive and high-throughput for organisms that have larger proteomes.”